Research Brief
2571
The UK and China see more funding than ever from deals involving corporate venture arms in 2015. But India sees a pullback.

Global corporate venture capital activity has skyrocketed as corporations seek new sources of growth and defend themselves against agile upstarts in private markets. The most active corporate VCs now include a broad array of venture arms in every industry from tech and healthcare to media and financial services.

Beyond the large US market, we used CB Insights data to analyze funding trends and active investors to other markets seeing CVC activity — the United Kingdom, China, and India.

Two of the largest UK deals with CVC participation both took place last July, with a $460M Series H to satellite provider O3B Networks and a $320M financing to the oncology company Immunocore. 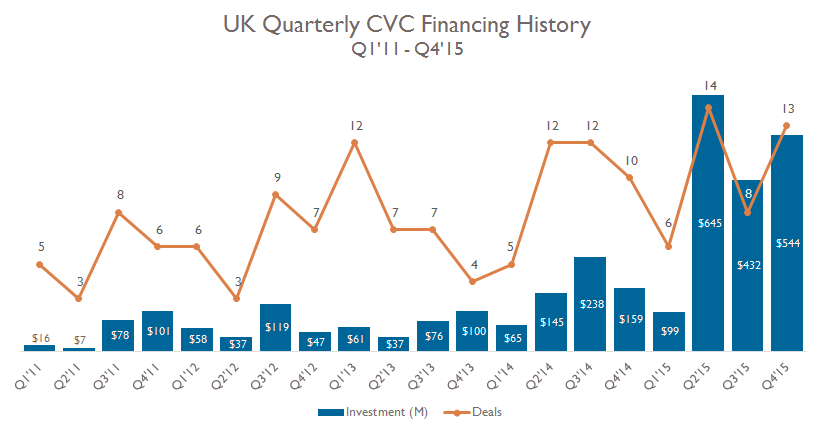 In China, CVC deals and dollars were also up for the year, fueled by a strong Q3’15. Corporate venture units participated in $6.2B of financings across 66 deals, rising from just $910M and 57 deals in 2014. 2015’s growth was driven by CVC willingness to jump into mega-rounds, including an $850M Series E to Dianping in April and a $2B Series F to Didi Kuaidi in July. 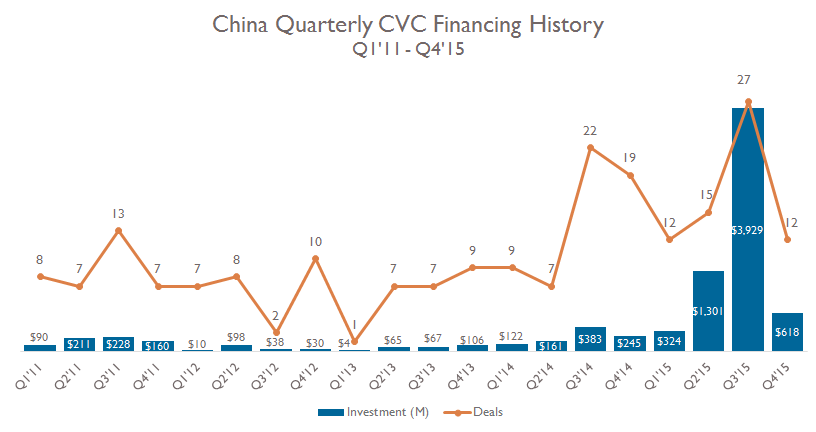 Though India has generally seen greater attention from CVCs in recent years, it stood out in 2015 as a market where investment actually receded. Financing with corporate venture participation dropped from $443M and 29 deals in 2014 to $421M across 24 deals in 2015.

Q3’15 was a strong quarter, with 10 deals, but funding was mostly driven by a $100M round to home furnisher Pepperfry and a $90M round to doctor search portal Practo. Even these larger deals were also dwarfed by the mega-rounds seen in other geographies. 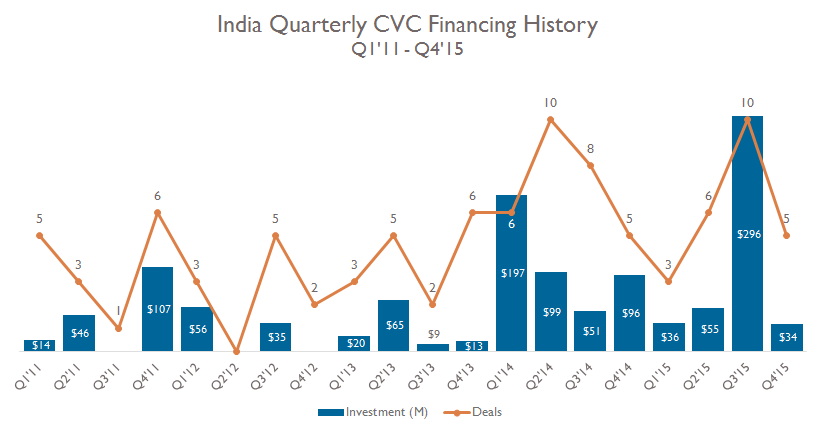 Breaking out the most active investors in these markets, Qualcomm Ventures has been active in sourcing international investments, ranking among the top 4 investors in each of these countries. Intel Capital took the top spot in both China and India, while Bertelsmann’s various investment arms also made appearances (tying for third with Cisco Investments in India).

The UK in particular saw active CVCs coming from a diverse group of industries. Qualcomm Ventures was joined by pharma ventures such as SR One and Johnson & Johnson Innovation and a consumer-packaged goods corporate in Unilever Ventures.

Want to better understand the corporate VC landscape? Check out our private market database below.