Thomas Grota of T-Venture Holding predicts that corporate VC participation will increase significantly. He also notes exceptions to the assumption that CVCs only invest in late-stage unicorn companies.

The following is a guest post by Thomas Grota (@thomasgr), investment director at T-Venture Holding, the corporate venture arm of Deutsche Telekom AG.

CB Insights released its latest Global Venture Capital Report for Q2’15 and, this time, corporate venture capital has a prominent place in the analysis. After reading various posts alongside the report, I would like to add some comments from my point-of-view and based on my daily work.

CVCs only invest in unicorns at late stage?

As stated by CB Insights in this post, the assumption is that CVCs only invest in the late stage in unicorns. Among the corporate venture arms with the most unicorns, Salesforce Ventures tops the list with eight unicorns within its portfolio. Salesforce has had an investment arm for several years, but took the step of raising its first formal, dedicated $100M fund just last year.

Below is a list of corporate VCs with three or more unicorns in their portfolio. Among the CVCs with US unicorn investments, none has invested in their unicorns earlier than mid-stage (Series B). 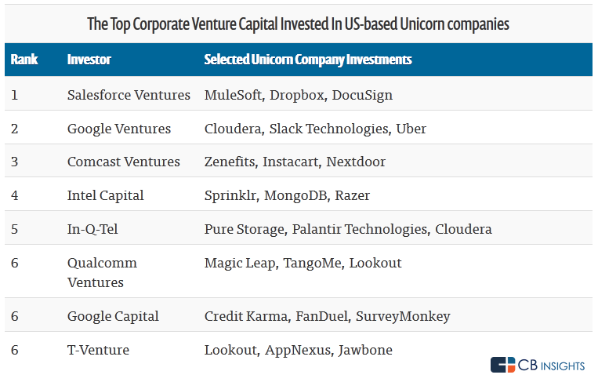 While I agree with the observation in general, I do not agree for T-Venture on this point. A company missing from the companies selected for this list is US-based Affirmed Networks, which recently joined the unicorn club. T-Venture was an early investor in Affirmed Networks some years ago. Another example for this could be a company called CipherCloud, also from the US. While CipherCloud is not a member of the unicorn club yet — it has the potential to become one rather soon, looking at the funding trends and cycles in Silicon Valley right now.

T-Venture invested in CipherCloud as the first investor and introduced them to Andreessen Horowitz, which led the A Round in 2012. Because of the time it takes to develop unicorn companies in the US, some waiting is needed for allowing early investments to reach this status. In the meantime, becoming a unicorn investor is easiest by investing in a company once it has already achieved this status. That is not that difficult, it is just expensive to do, but maybe worth it when looking at financial outcome and multiples.

Currently the big numbers for our portfolio looks like this: 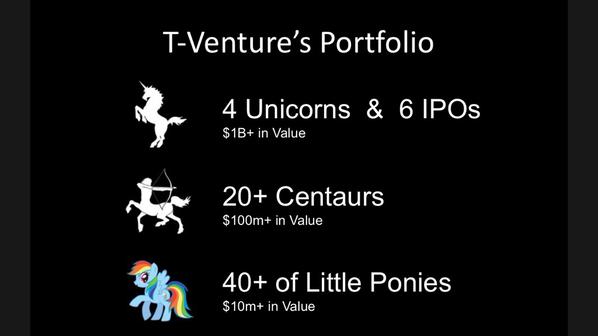 CVC participation in deals is stable over time

As the report correctly points out:

But this only shows the number of deals regarding CVCs. When looking into the composition of those rounds you will see most of the cash contribution to those deals is coming from the CVCs in that round. The latest example would be Spotify, where out of a $500M financing round at $8.5B valuation, telecom TeliaSonera invested $100M alone from their corporate balance sheet.

So while having those CVCs in your round is not important for their name, from the contribution perspective it makes a big difference. Taking into account that those entries are coming at Series D or E rounds at a hefty price tag, this highlights the importance of getting those big guys in those rounds.

However it does not promise a good investment outcome for the CVC, hence the case of Spotify: the company would have to be sold or go public at $15B to get a 2x multiple on the late-stage investment. Looking at IPO and exit markets currently, I have high doubts that those price tags are achievable. It would be interesting to see a graph highlighting the investment amount of CVCs over the last periods instead of number of deals. 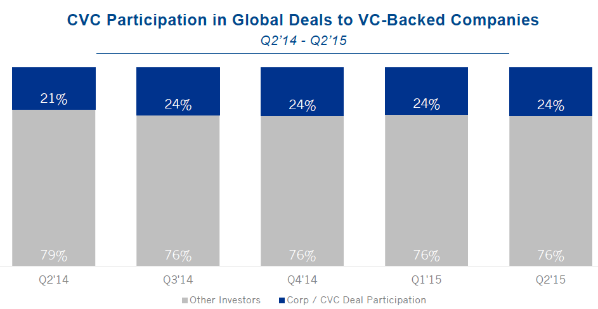 Obviously those trends will increase the number of CVCs in a unicorn investment. Unicorns need large amounts of cash to sustain their high-spending marketing strategies. Those high cash contributions can not be done by traditional VCs, but only by CVCs and private-equity firms. As seen in the graph below, the number of overall deals to VC-backed companies are declining slightly while the amount of financing is still on the rise.

While the number of private equity investors is rather low the CVCs are the only targets left to be addressed for those financing rounds. On average, you will find a ratio of 1 PE to 3 CVCs in a deal while the ratio is increasing to the side of CVCs. So expect more corporate investing into unicorns — not only because it is an interesting space but it is also needed by those unicorns hence the private markets are running out of opportunities to address other segments for high cash investments. You might consider this a given based on a short timeframe of analysis. But wait: there is some evidence supporting this observation: 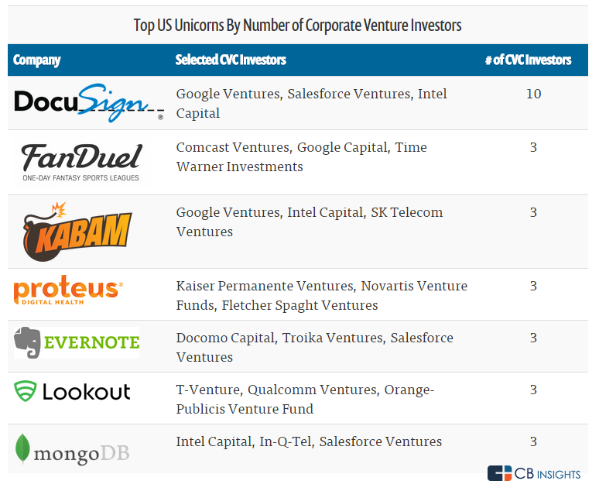 DocuSign is leading the way for all other unicorns to the source of cash and new record valuations. However it is hard to predict whether there will be a positive outcome from a financial investment perspective. This is true for all larger investment rounds for corporate investments: whether it is CVCs or balance sheet investments in those companies.

Even if you can’t follow this argument from a Silicon Valley perspective — please have a look into Asia and unicorn developments there. The latest news from India and China support this trend to a very large extent: Olacabs (investors: Softbank, DST) is still ahead of Uber in India, while Uber already seems to have lost the battle in China to corporate-backed Didi Kuaidi (investors: Tencent, Alibaba).

Thomas Grota is Investment Director at T-Venture Holding, the corporate venture capital arm of Deutsche Telekom AG. He exited Swoodoo to Kayak.com, Apprupt to Opera Software, and 6Wunderkinder to Sequoia Capital in a secondary transaction. Additionally Thomas is Mentor at seedcamp and hackfwd — both incubators to accelerate startups.

After seven years of working in a start-up environment as CTO of an enterprise content-management vendor, Thomas joined Deutsche Telekom, the German telecommunication company, to head the strategy department of the international wholesale unit. Later on, Thomas was member of the international consulting arm of Deutsche Telekom, where he developed business models for media companies and the digital entertainment industry. He also previously served as head of the Center of Excellence “New Media” at Detecon.