In CB Insights and Morgan Lewis’ new “Corporate Venture Capital Term Sheet Survey” Q1’15 report we briefly review relevant statistical data that demonstrates a clear trend of robust activity by CVCs in recent years. We also analyze the key terms of the largest venture capital investments during the first quarter of 2015 in which CVC programs either led the round or participated as significant or anchor investors, including the later stage unicorn financings. CVCs were the lead investor in 60% of the financings reviewed.

The objective of the survey is to identify significant trends and factors that may distinguish CVC-sponsored investments from traditional venture capital financing transactions. We believe it is critical to understand CVCs given their increasingly prominent role in the venture capital landscape (as highlighted by the data on the following pages).

As venture capital (VC) funding rose to highs not seen since the “dot-com” days, CVC investors are participating in an increasingly larger share of the overall venture ecosystem.

In 2014, CVCs participated in 727 deals totaling $12.6 billion in overall funding. On a year-over-year basis, 2014 total CVC deals rose 25% and the CVC dollars invested rose 77%, and that momentum is carrying into 2015. In Q1’15, CVCs participated in 178 deals totaling $3.6 billion over the three month period — the highest first quarter deal total in any of the last four years and 11% higher than Q1’14 CVC deal activity. 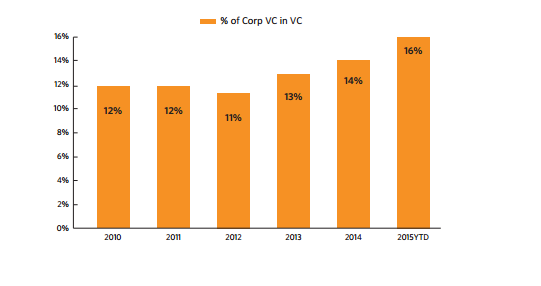 We focused our survey on the following deal terms typically negotiated between companies and investors:

The following is a summary of the key terms for the largest venture capital investments in Q1’15 in which CVCs led the round or participated as a significant investor.

With “non-participating” preferred stock, the preferred stockholders are entitled to receive only the amount of their preference (typically the amount paid for the stock) plus any accrued and unpaid dividends upon a sale or liquidation of the company.

Redemption rights allow investors to force the company, in specified circumstances, to redeem their shares at cost (and in some cases, cost plus a small guaranteed rate of return). Based on our review, 30% of the transactions included some form of redemption rights, while the remaining 70% did not provide redemption rights.

A “pay-to-play” provision requires that investors participate in a later financing in order to retain their antidilution or other special rights. A pay-to-play is not a standard term in most VC financings and typically will come into play only in down-rounds. We did not observe any pay-to-play provisions for any of the transactions we reviewed.

While the economic terms of each investment are unique based on facts and circumstances of the companies and participating investors, one can nevertheless glean a pattern from the survey with respect to CVC-sponsored investments.

For one thing, it appears that CVC programs are offering terms that are substantially similar to traditional VC financing, which seems contrary to the conventional wisdom that CVC investors tend to focus on control provisions and governance restrictions due to their strategic intent. For example, the lack of participating preferred stock, cumulative dividend, and redemption rights is fairly common in a typical up-round VC financing.

In summary, the trend we observed in Q1’15 may reflect a more competitive market for CVC investors, particularly for companies that have a compelling story and a strong track record.

Below we provide a “Company Friendly Barometer” for each of the seven key economic terms to illustrate—on a scale of 1 to 5 (one representing least favorable and five most favorable)—how each term impacts the company. 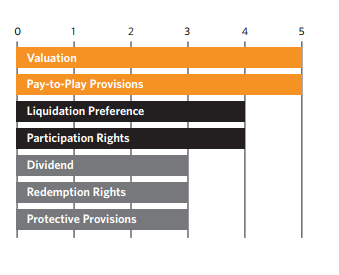