Q2’13 saw corporate VCs participate in 126 deals representing total funding of $1.7B. In addition to strong deal growth, corporate venture funding climbed 7% versus a year ago. Overall, corporate VCs are doing deals across all stages and sectors and are cutting much larger checks. In fact, deals in which CVCs participate are 60% larger than the typical VC deals. The recent quarter underscores the fact that CVCs are becoming an increasingly key constituency in the venture ecosystem with 25% of overall VC funding now including participation by CVCs. With traditional VCs having a tough time raising money from LPs, are corporate VCs stepping in to fill the gap? 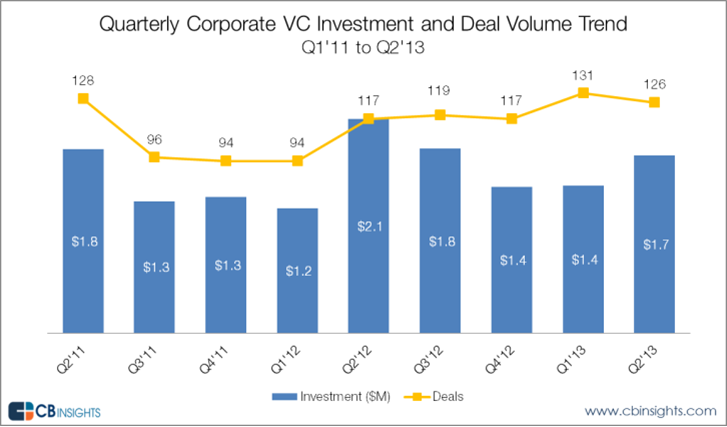 Number of CVCs participating in the market on the rise

The number of CVCs actively investing is steadily on the rise. In Q2’13, 66 different CVC investors participated in at least one investment which was up 40% versus the number of participating CVCs in Q3’11.

Google Ventures tops the list of most active CVC investors. The top five is rounded out by Intel Capital, Qualcomm Ventures, In-Q-Tel and Novartis Venture Funds.

Over 1/3 of most active CVCs are healthcare focused

Versus Q1’13, healthcare CVC deals and funding were up 39% and 34% respectively. Deals and funding also were up YoY. Over 1/3 of the most active CVCs are healthcare-focused including the venture arms of Novartis, GlaxoSmithKline, Merck, J&J, and Kaiser Permanente among others.

Corporate VC deals continue to be much larger with deals in which CVCs participate averaging $15.1M in Q2’13 while the overall VC average is $9.5M.

4 of every 10 CVC deals and dollars went to the Internet sector. Funding to the internet sector by CVCs hit a five-quarter high in Q2’13.

Almost 40% of deals with CVC participation were at the Seed or Series A stages. No longer content to just invest in mid- to late-stage companies, CVCs have become increasingly comfortable investing at the earliest stages.

CVCs have also become a steady source of funding at the Series A level helping to diminish some of the issues presented by the Series A Crunch. One of every 4 CVC deals in Q2’13 were Series A deals – this represented an 800 basis point increase in Series A deal share vs. Q2’12.

California losing a little of its CVC edge?

While California remains the top destination for corporate venture capital deals, deal share to the Golden State was lower on a sequential and YoY basis. Corporate VC funding in Cali has stayed range-bound for the last 4 quarters and has not hit $1B since Q2’12’s $1.56B invested.

NY is #2 spot for CVC funding for 2nd straight quarter

Massachusetts remains the #2 spot for CVC deals but buoyed by a series of mega-deals, NY was the #2 market for CVC funding for the 2nd straight quarter.

Overall, NY and Mass combined to take over ¼ of CVC funding in Q2’13.

After seeing a record quarter in Q1’13 for mobile deal activity, the pace of CVC investment into mobile slipped back in Q2’13 on both funding and deals. However, on a YoY basis, CVC mobile deals and dollars are up 35% and 41% respectively.