264 new CVCs invested for the first time in 2018, up 35% year-over-year. In total, 773 CVCs placed bets, with GV taking the top spot, followed by Salesforce Ventures.

The corporate venture capital ecosystem is expanding far beyond the likes of GV and Intel Capital.

What is Corporate Venture Capital?

Corporate venture capital, or CVC, is a form of venture capital where corporate funds are directly invested in external private companies. CVC funds are managed and invested by specialized divisions of a larger company, such as GV for Google and M12 for Microsoft.

Looking at quarterly trends, Q4’18 saw the highest number of active corporate VCs ever, with 429 CVCs investing in the quarter. This number represents 59% year-over-year growth, up from 270 active corporate investors in Q4’17. 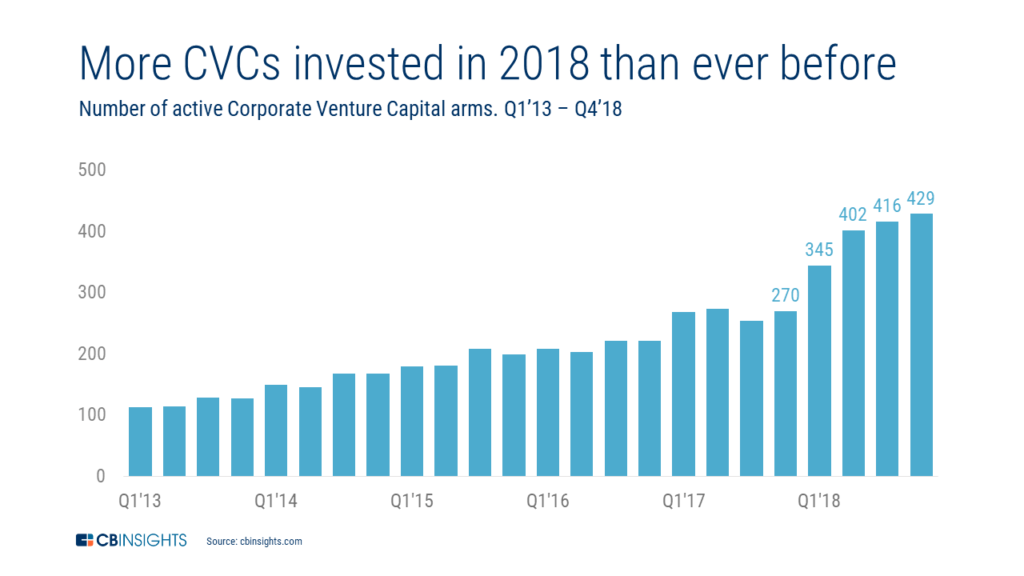 For a broader look at the most active CVC investors in 2018, here are the top 34 most active CVCs by number of portfolio companies, with firms from a wide swath of industry verticals:

In 2017, GV took the spot as the most active investor, followed closely by Intel. New entrants to the list included Fosun RZ Capital, a Chinese investment conglomerate, as well as K Cube Ventures, the early-stage venture arm of Korea-based Daum Kakao.

In 2016, Intel Capital and Google Ventures tied for the most active corporate venture capital investors. Salesforce Ventures and Comcast Ventures rounded out the third and fourth spots, while Qualcomm Ventures, Cisco Investments, GE Ventures, and Bloomberg Beta filled out the top 8.

The top 62 most active CVC investors in 2016 includes a number of names across a variety of industries. Google, Intel, and Salesforce are among those representing the tech industry while firms like Pfizer, Novartis, and SR One are from the healthcare field.

In 2015, Intel Capital was the most active CVC investor with investments in companies like iZettle and Docusign, among others. Google Ventures and Qualcomm Ventures rounded out the 2nd and 3rd spots.

Other CVCs represented in the top 10 in 2015 include Comcast Ventures as well as Bloomberg Beta and Cisco Investments.

CVCs like Amazon’s Alexa Fund as well as Rakuten Ventures are among the firms represented below. Additionally, Asia-based CVCs like Ping An Ventures and Legend Capital were among the most active CVC investors in 2015.

In 2014, Google Ventures was the most active CVC investor in US-based companies.

Intel Capital and Salesforce Ventures rounded out the 2nd and 3rd spots while healthcare funds like Novartis Venture Funds and SR One were among those in the top 10.

Below are the top 100+ most active CVC investors in US-based companies in 2014.

A range of industries are represented in the 104 CVC investors below including financial services CVCs like Citi Ventures as well as automobile manufacturer CVCs like GM Ventures, among many others.

Looking for more corporate venture financing and exit data? Sign up for a free trial of the CB Insights Venture Capital Database.