Research Brief
2436
Corporate activity in AI slowed in 2015 after reaching a six-year high in 2014. Major players include Bloomberg Beta and Samsung Ventures.

VC-backed artificial intelligence startups, which have seen a sevenfold increase in funding since 2010, have also seen corporations take a greater interest.

While acquisitions of VC-backed AI startups by major corporations — including Vocal IQ by Apple, Wit.ai by Facebook, and DeepMind by Google — have been in the spotlight recently, corporate involvement in investing in these startups has also grown. Deals to AI startups involving corporates saw a 15x increase between 2010 and 2015.

Out of the companies on the list, Expect Labs had the most corporate backers, with investments from Google Ventures, Samsung Ventures, Intel Capital, In-Q-Tel, Telefonica Ventures, and Liberty Global Ventures. The San Francisco-based startup is working on intelligent voice interfaces.

Funding from deals involving corporations skyrocketed in 2014, when startups netted $230M in 21 such deals.

That year, Intel Capital backed Api.ai in its Series A and B rounds (Motorola Solutions Venture Capital also joined in the Series B); Tencent invested in Scaled Inference; and Google Ventures backed Clarifai in a seed round (Qualcomm Ventures joined in a second seed round to Clarifai in that year). Google Ventures, now known as GV, also backed Luminoso Technologies in a $6.5M Series A round in 2014.

But the spike in 2014 AI funding can be attributed mainly to Sentient Technologies’ $103.5M Series C mega round, which saw participation from corporate India’s Tata Communications.

Corporate-backed deals dropped 29% in 2015, but was still higher than every other year except 2014. 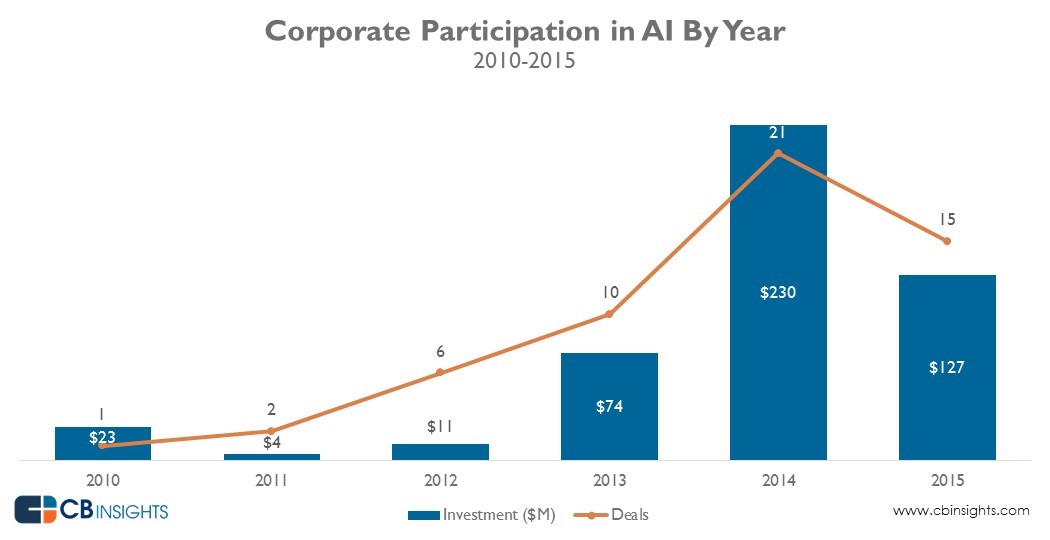 After very low deal activity in the first three quarters, the pace picked up in the Q4’15, with number of deals growing and almost equaling that of Q4’14 and Q3’14 each of which saw 8 deals. Corporate activity during Q4’15 was spotlighted by Google Inc.’s interest in China with its large — reportedly in the “tens of millions of dollars” — investment in artificial intelligence startup Mobvoi. 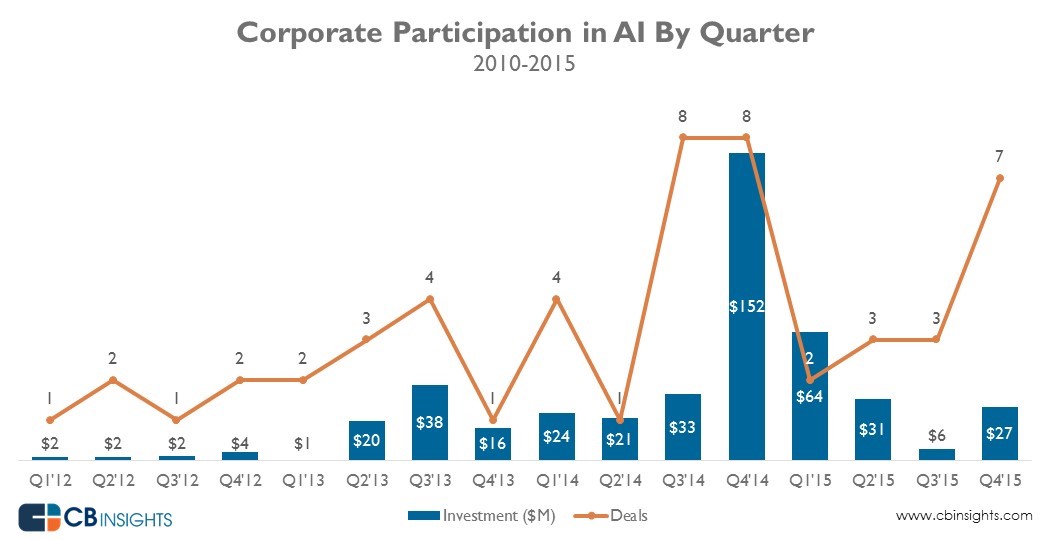 The majority of corporate participation during the 2010 to 2015 period — 65% — was in early-stage deals. The 4% late-stage deal share includes two Series F financings raised by Nexidia, which is backed by BlueCross BlueShield Venture Partners. The “other” category includes Digital Reasoning Systems‘ corporate minority round, funded by HCA Healthcare (Hospital Corporation of America). 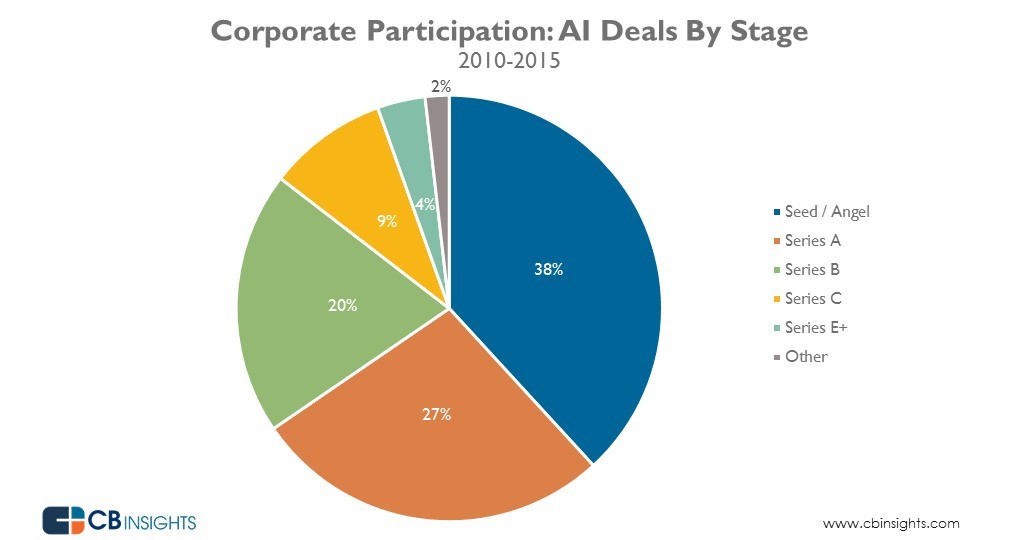 Though early-stage deal share was higher, the most dollars (69%) went into mid-stage deals with corporate participation. These include Ayasdi’s $30M Series B round, backed by GE Ventures and Citi Ventures, and the previously-mentioned Sentient Technologies’ $103.5M Series C. 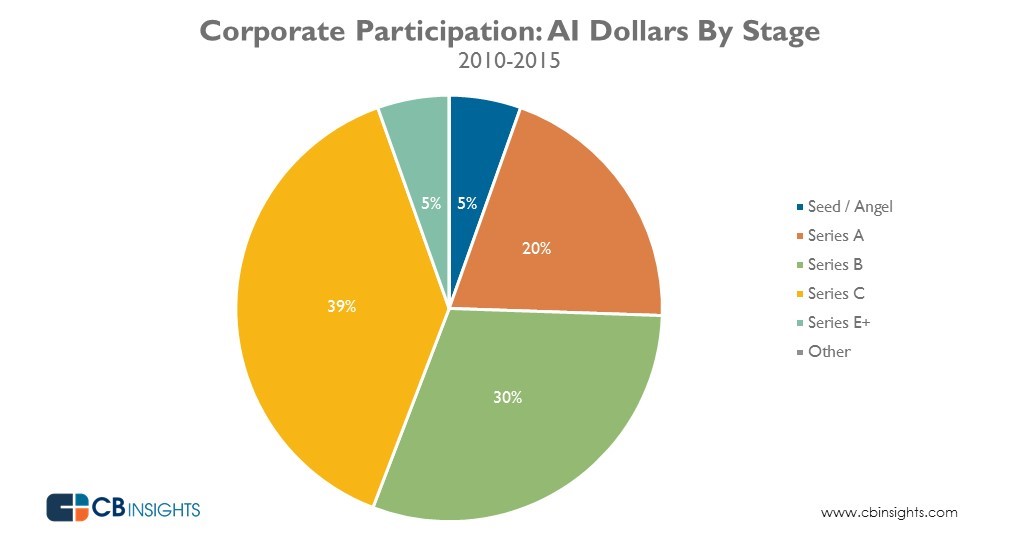 More than 45 corporations and corporate venture capital firms have invested in artificial intelligence startups since 2010.

Bloomberg Beta, which was launched in 2013, is one of the most active investors in this sector, funding companies like Howdy, Domino Data Lab, Context Relevant, and Diffbot. Last year, Samsung Ventures invested in Vicarious Systems — the third-most well funded company on our list. Samsung’s other investments in AI include Idibon, Expect Labs, and Winston. The venture capital arm of Japan’s internet services company, Rakuten, invested in visual technology startup ViSenze and Seattle-based Algorithmia.

Below are some corporate investors actively funding AI startups. 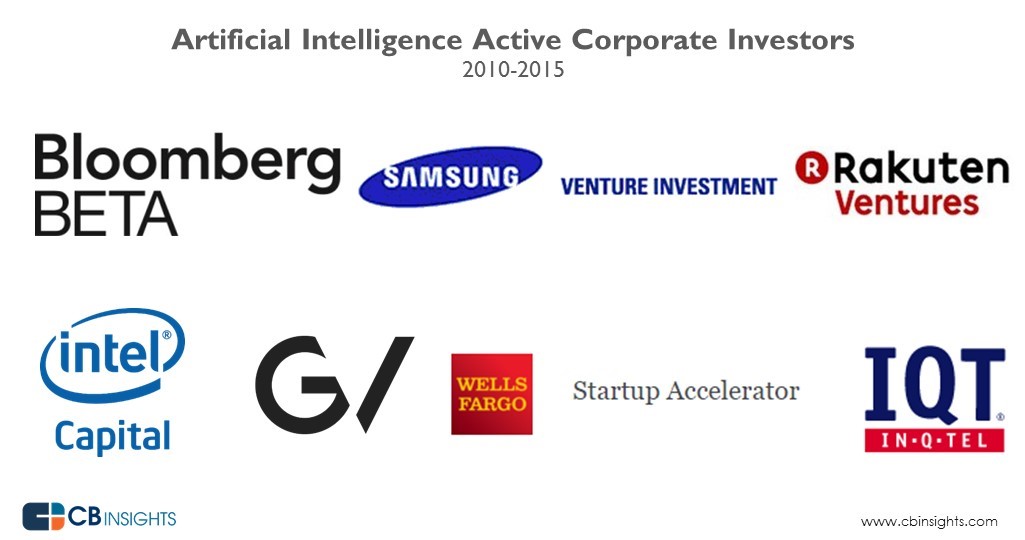 Want more data about top artificial intelligence startups? Sign up for our venture capital database below.