Research Brief
2538
Funding to cancer startups from deals involving corporate investors was up 289% in the year. Novartis Venture Funds and Lilly Ventures were the most active.

Funding to private cancer therapeutics companies grew by 153% from 2014 to 2015. Corporate-backed investments to these companies followed a similar trend, with deals nearly doubling and funding from these deals quadrupling in the last year.

So far in 2016 (as of 3/14/2016), 8 oncology-focused startups, including Forty Seven, NextCure, Autolus, and Inivata have raised rounds with corporate backing, with investors like Pfizer Venture Investments, Google Ventures, and Johnson & Johnson Innovation taking part.

Our analysis includes private biotechnology and drug discovery companies globally focused on cancer treatment, including the use of immuno-oncology (therapies that target the immune system to help fight cancer), oncolytic viruses (viruses that kill cancer cells), antibodies, and drugs that target the cancer stem cells thought to lead to tumors.

Except for a drop in funding in 2012 (consistent with overall funding trends to this sector that year), funding dollars from rounds involving corporate investors — including corporate parents and differentiated venture arms — increased nearly five-fold, from $259M in 2011 to $1.24B in 2015.

Deals with corporate participation nearly doubled in the last year. The largest funding round was a $320M Series A round raised by Immunocore, which was backed by Lilly Ventures. There were 5 other $70M+ corporate-backed deals last year. 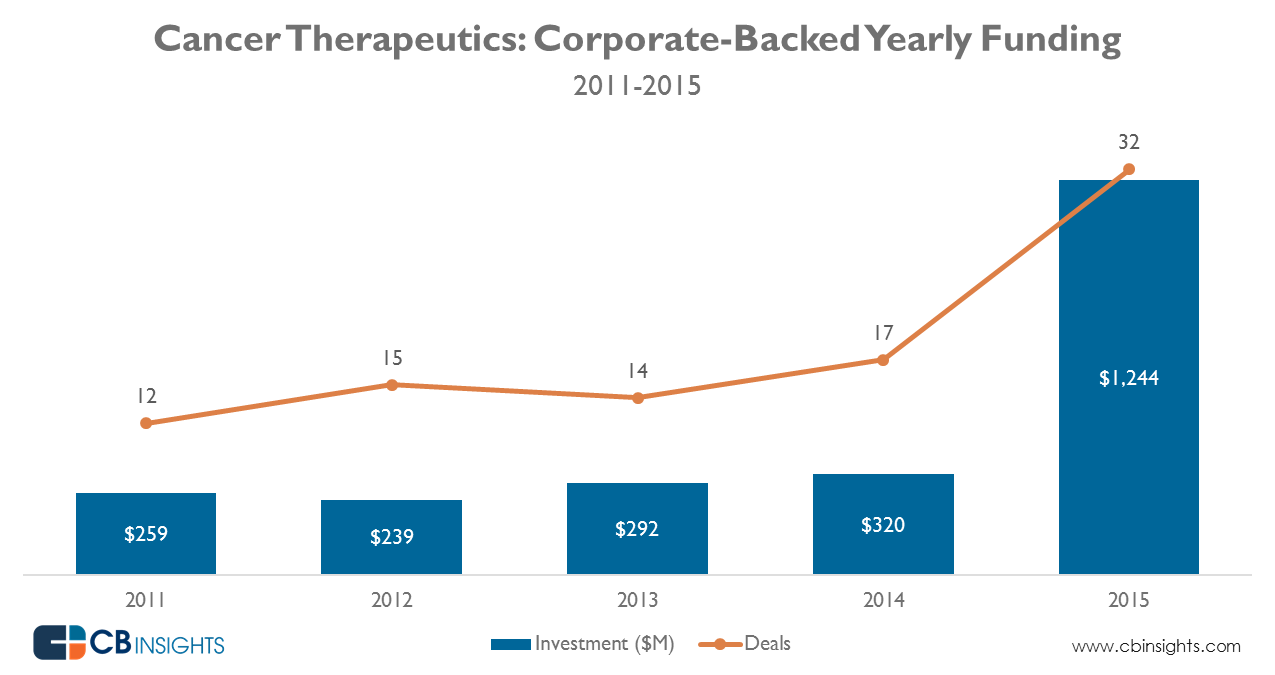 Corporate funding and deals by quarter

Q3’15 had the highest amount of funding with corporate participation in the last three years. The $636M in aggregate funding was driven by the previously-mentioned $430M mega-round raised by Immunocore. The first quarter of 2015 had 11 deals to cancer therapeutics companies with corporate involvement. 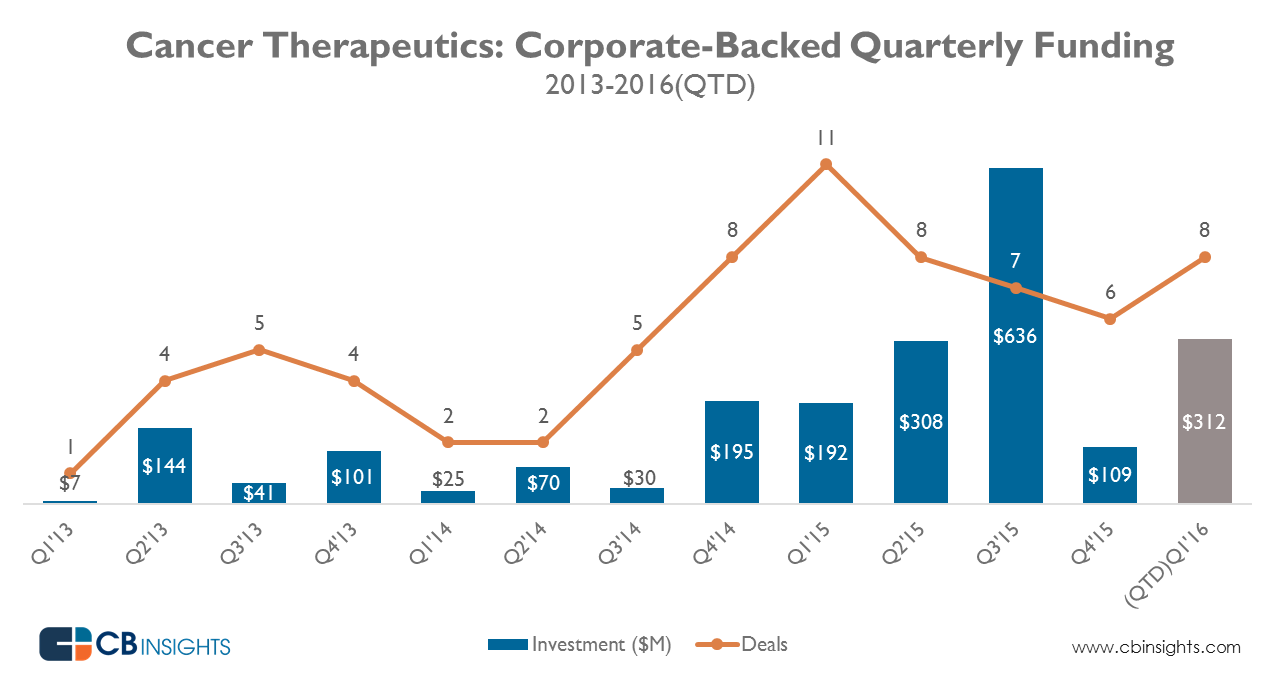 The majority of deals with corporate participation in the last 5 years were early-stage financing rounds. Corporation and CVCs backed over 30 companies raising Series A rounds. Only two seed rounds, raised by GamaMabs Pharma and Neoantigenics, had corporate backing.

27% deals went to mid-stage companies raising Series B and C rounds. Late-stage deals saw the lowest share of deals with corporate participation, consistent with the overall deals trend in this category. 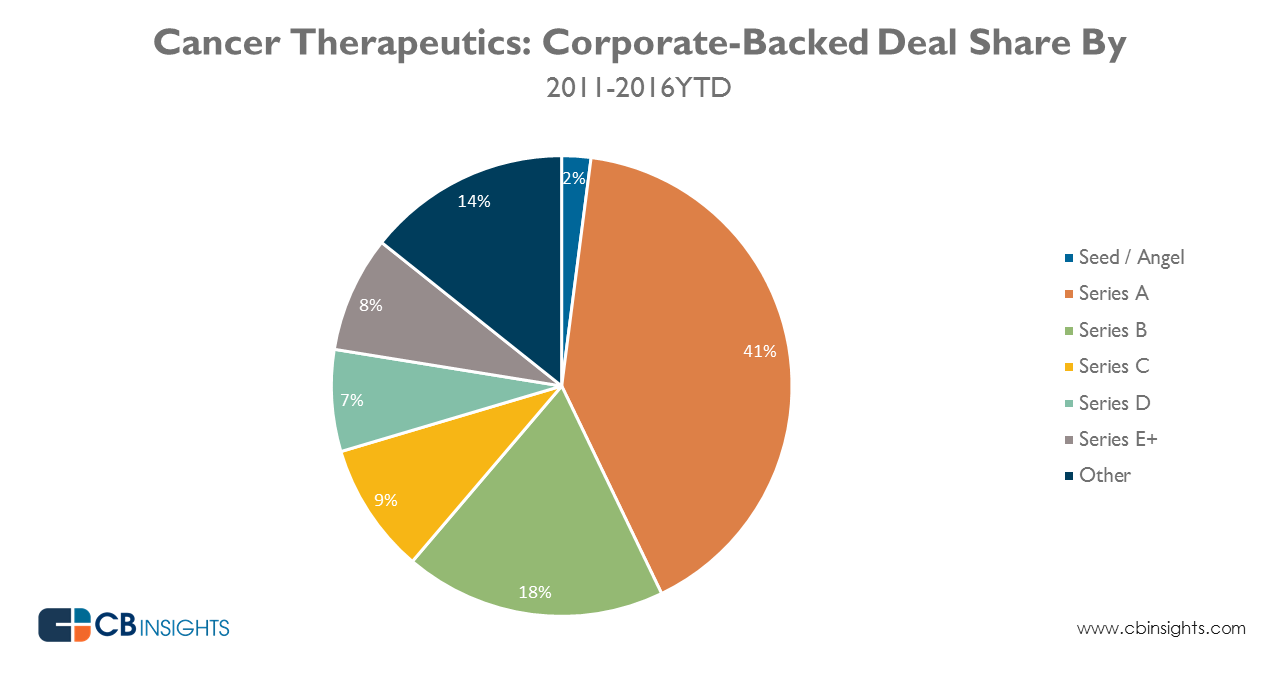 Switzerland-based Novartis Venture Funds, which ranked 6th in our overall most-active VCs list for cancer therapeutics, was the most active corporate investor. The CVC participated in over 10 deals and backed companies including Raze Therapeutics, eFFECTOR Therapeutics, and Innocrin Pharmaceuticals.

Indiana-based Lilly Ventures was the second most active investor. Just in the last year, the CVC backed companies including Immunocore, Surface Oncology, and Innocrin Pharmaceuticals.

The graphic below shows other corporations and CVCs actively investing in cancer therapeutics. 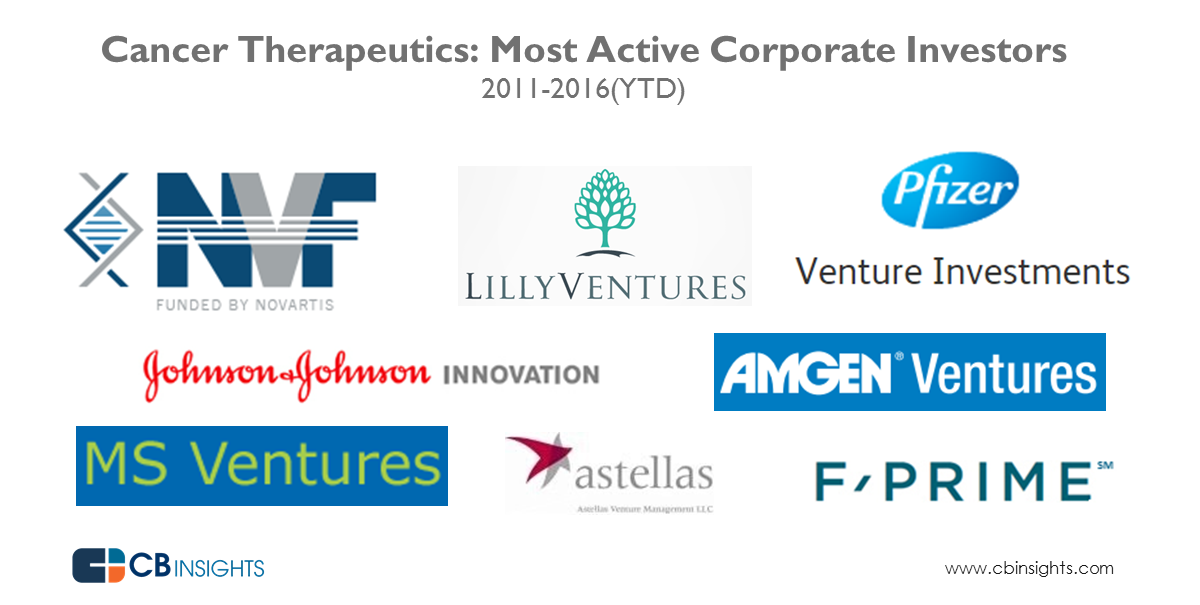 Sign up for our venture capital database below for more information on oncology companies.