Research Brief
1902
Half of corporate VC funding to e-commerce startups is in early-stage companies. Google Ventures and Intel Capital are among the most active investors.

Corporates are increasingly investing in e-commerce startups, participating in a total of 352 deals worth some $11.4B between 2010 and Q1’15. This averages to about $32M in funding per deal. In the last four quarters, including Q1’15, corporate venture funds have participated in e-commerce deals totaling $3.94B, an increase of 52% over the previous yearlong period in terms of overall deal value.

The dollars invested alongside corporates in 2014 almost doubled 2013’s total. However, most of this can be chalked up to a single deal of $1B to India-based company Flipkart by Naspers, a South African media giant, and other investors. That single deal accounted for 27% of the total $3.8B in investments that included corporates in 2014. 2011 was another peak year for deals including corporates, with $3.1B in investments, although $1.5B of that amount came from a single financing round, which saw Walmart, Digital Sky Technologies, Tiger Fund and other investors invest in China-based online retailer, Jingdong (which later exited in a 2014 IPO). 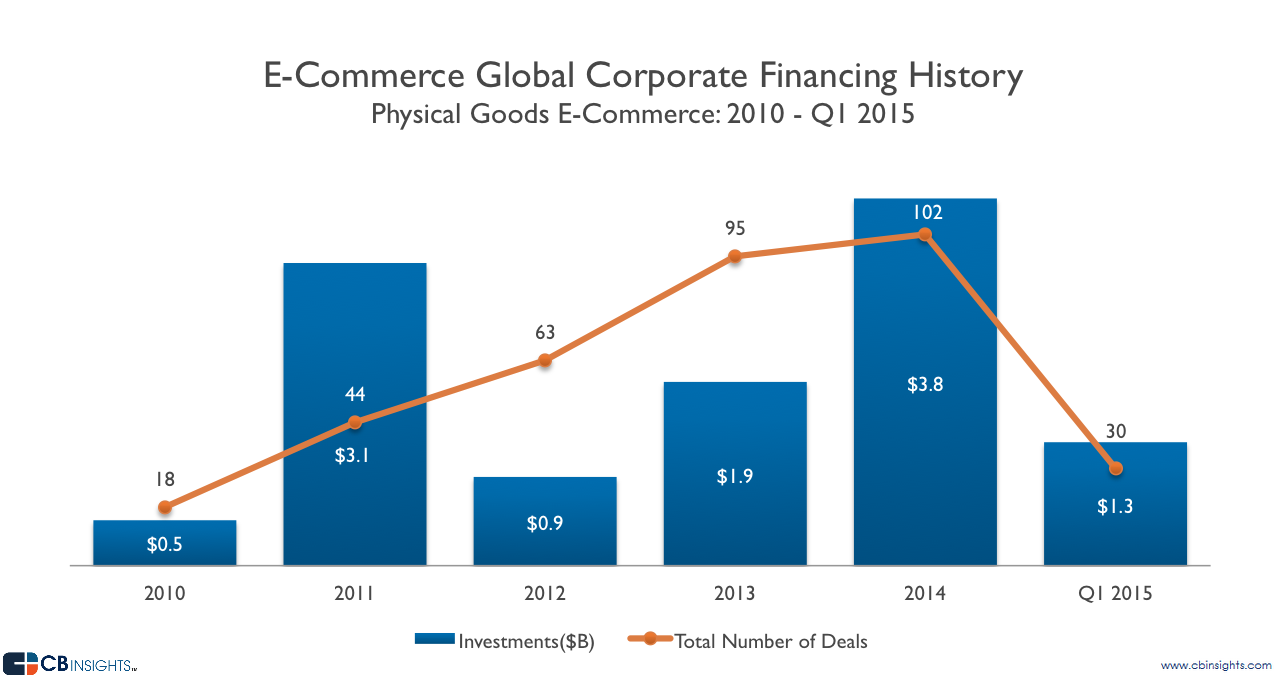 The quarterly breakdown reveals a significant upward trend in quarterly deals. The average number of deals per quarter jumped from 5 in 2010, to 16 in 2012, and then to 26 in 2014. The largest quarter in terms of amount invested in deals with corporate participation was Q2’11, but again this was due to the massive Jingdong deal. 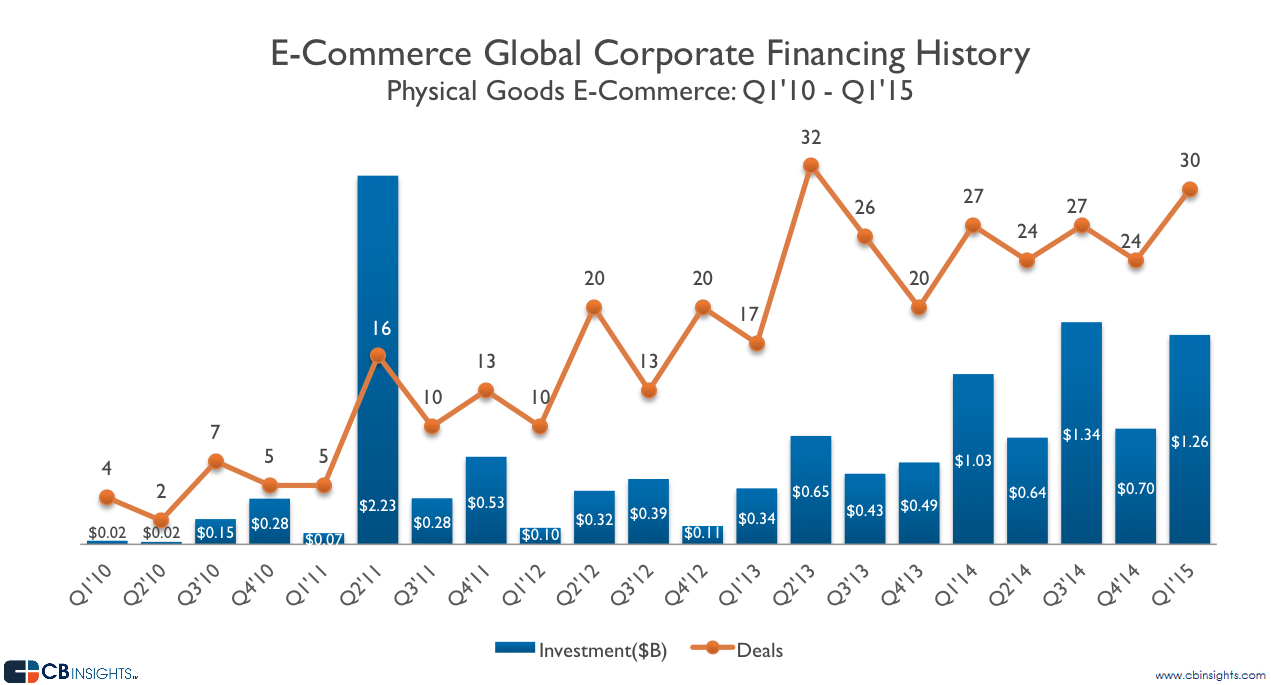 The graph below gives the breakdown of deals by investment stage in every year. The number of corporate early-stage funding to e-commerce is notable: 33% to 55% of the deals in each quarter. This is due to corporate VCs like Google Ventures and FundersClub investing almost entirely in early-stage e-commerce companies. Meanwhile, mid-stage investments comprise about 22% to 33% of the corporate venture deals. 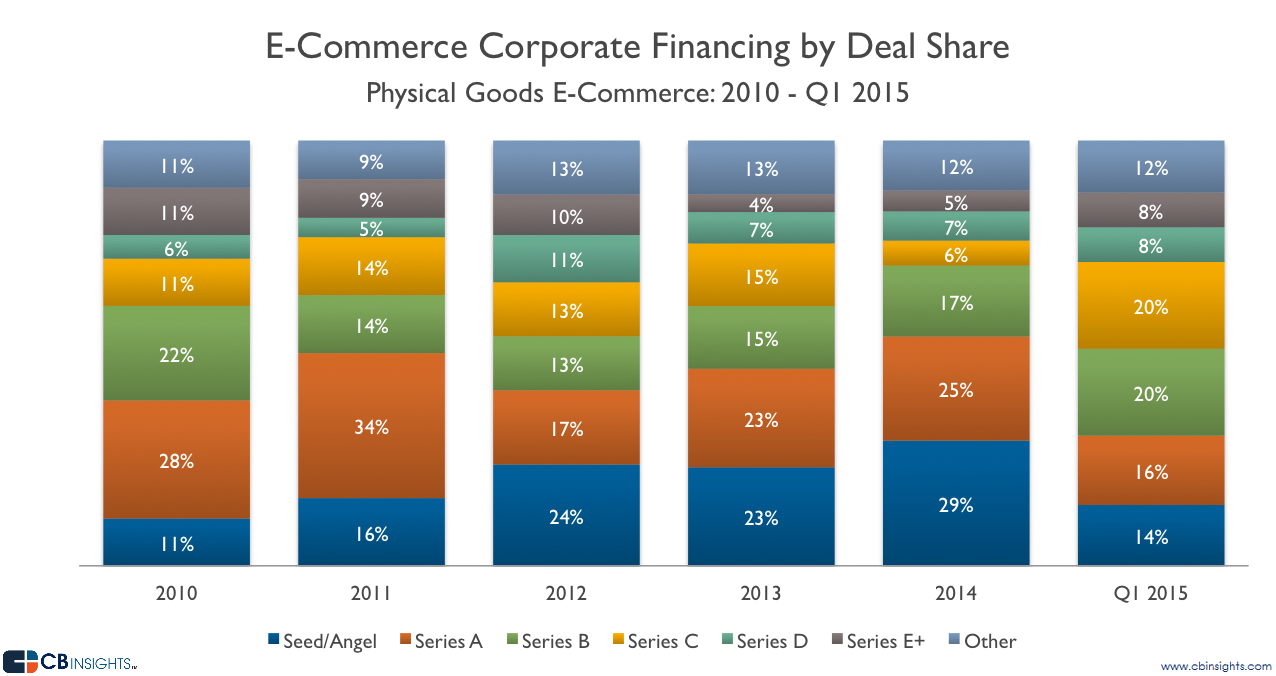 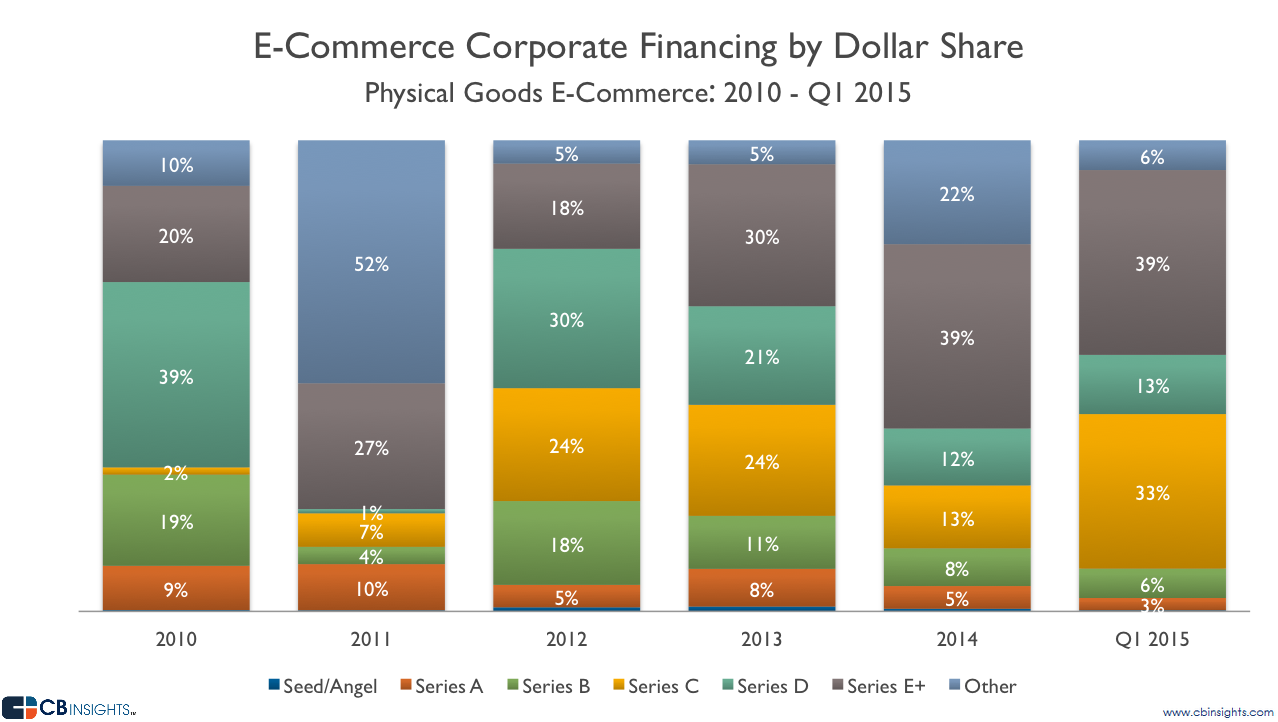 Corporate investment has gone global. China received about $4.3B in total funding from deals that included corporates, 47% more than the US market, which received $3B. India is a close third, with $2.1B invested over 25 deals. Russia is fourth with $500M invested over 10 deals. 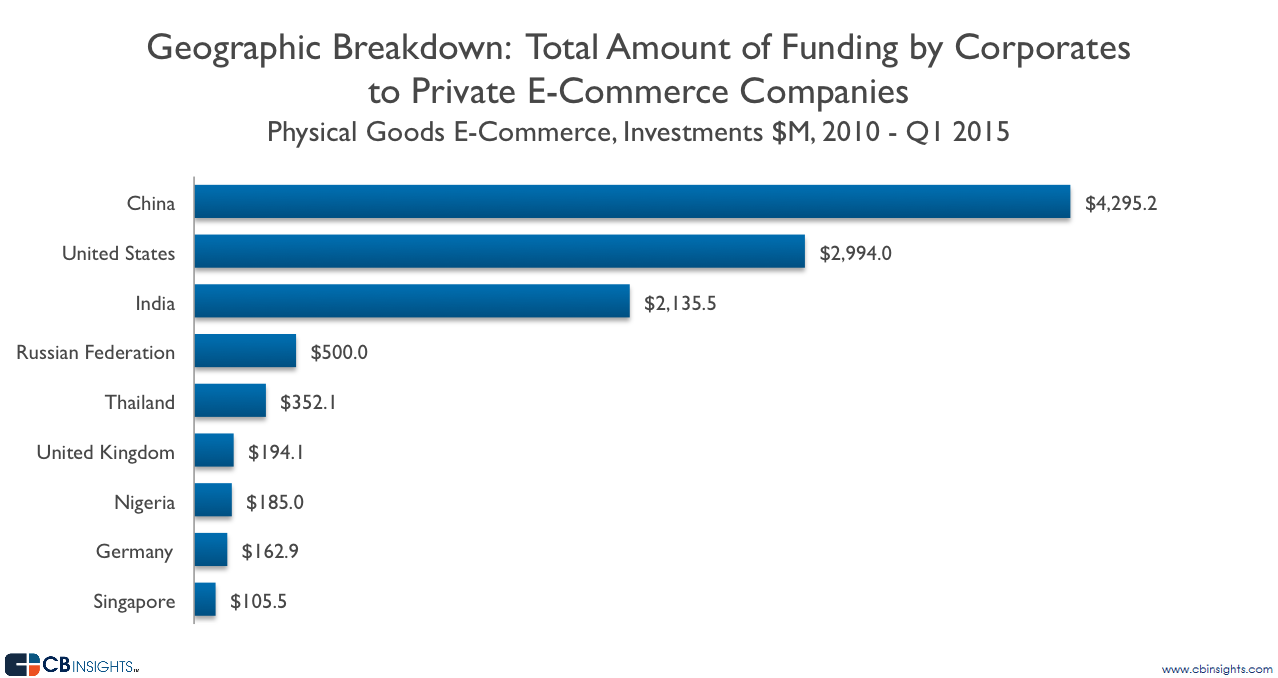 The top corporate investor in e-commerce is Intel Capital, with more than 15 investments from 2010 to 2015. Intel’s largest deal was a $133M in Series D funding to India-based e-commerce company Snapdeal. Google Ventures places second on the list with investments in companies such as CustomMade and Spring. FundersClub ranks third with more than 10 investments.

Google Ventures is the top early-stage investor, with nearly all of its investments made in the early stage. FundersClub is second and was also mainly focused on early stage deals. FundersClub’s largest deal was an investment of $8.5M Series A funding in Instacart.

Want more data around corporate investment in different industries? Login to CB Insights or sign up for free below.