Research Brief
2651
Corporates and their venture arms piled into over 130 deals for Internet of Things startups in 2015, but the start of this year has seen that interest taper significantly.

In 2015, corporations and their venture arms participated in a record number of IoT deals, backing over 130 financings in the space (compared to less than 70 just two years ago).

A sizable chunk of the activity has been driven the corporate venture arms of tech hardware giants, including those of Intel Capital, Qualcomm Ventures, and Cisco Investments. These three companies are among the most active IoT backers.

We used CB Insights data to identify the corporate VCs and corporations investing in IoT startups, and tracked their investments and deals.

Most notable in the yearly investment history is a massive upswing in funding in 2015. Year-over-year, 2015 saw a 92% jump in funding from corporate-backed IoT financings. Deal volume also bumped up to 131 deals for the year, which is 22% growth over 2014’s total.

One of the largest deals in 2015 was to IoT networking company SigFox, which held a Q1’15 $115M Series C that included a host of corporate backers including Intel Capital, Samsung Ventures, SK Telecom Ventures, Telefonica Ventures, Air Liquide, Engie, and Eutelsat Communications. 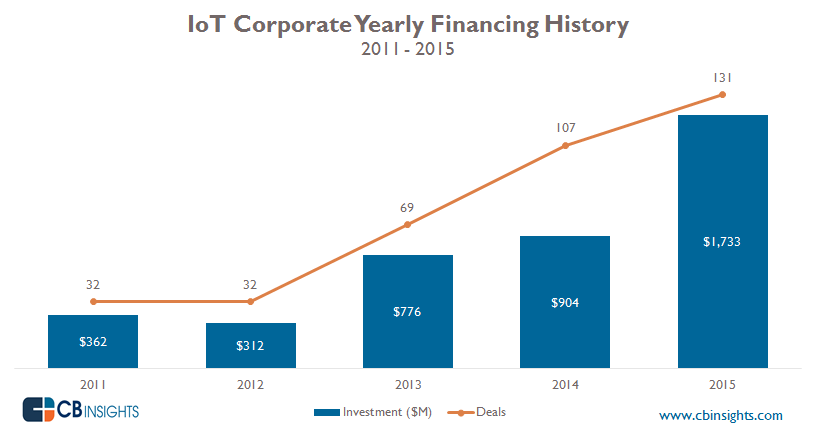 After a relatively weak Q4’15, corporate IoT investment did not see a significant recovery in Q1’16.

The recent recession in deal volume suggests a tightening in overall activity. Over the past 4 quarters, deal volume has declined from its peak of 39 in Q2’15 to just 24 deals, the lowest quarterly total since Q2’14.

Despite these headwinds, Q1’16 rallied to a relatively high $380M in funding from deals involving corporates, a 12% increase quarter-over-quarter. However, the decline in deal activity has been persistent, and a better indication of tapered corporate activity in the space. 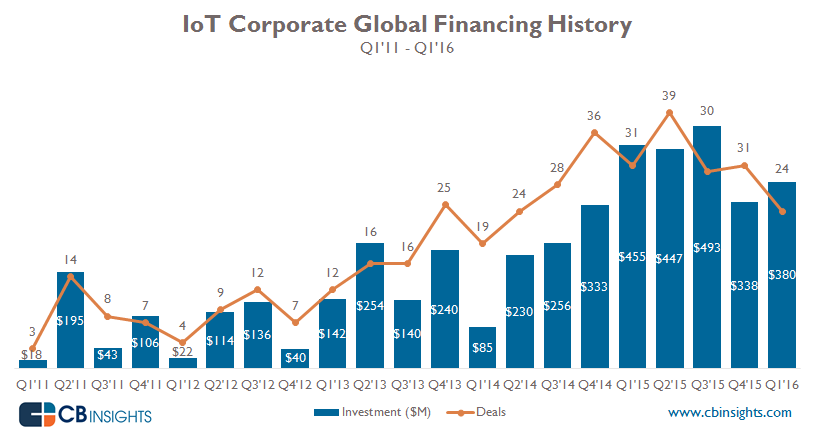 Want more data about top Internet of Things (IoT) investors? Log in to CB Insights, or sign up below.