Startups have begun to disrupt the financial world, and are changing the face of everything from business payments-processing to how college students split the bill at restaurants. We used CB Insights data to look at how major corporations are investing in payments technologies, which in some cases are often threatening to disrupt their core business models.

Corporates and corporate venture capital arms —  including payment giants like American Express Ventures, Visa, and MasterCard Worldwide — are investing more heavily in payments technology. The first 11 months of 2015 have already seen by far the highest-ever annual funding to payments startups from deals involving corporate investors. Deal count for these kinds of financings is also on track for an all-time high.

In 2015 year-to-date through 11/25/15, corporates and CVCs poured money in to the payments sector, participating in 42 deals involving $1.6B invested. At the current run-rate, funding to payments from these deals is projected to reach over $1.8B, across almost 50 deals.

2015 YTD funding almost quadrupled year-over-year and has heavily surpassed any other year in terms of funding from deals involving corporates, but it’s worth noting that 65% of funding for the year, or $1.05B, was invested in India-based One97 Communications, which counts Alibaba Group as its corporate backer, among other investors.

If we exclude 2015 investment into One97 Communications, 2015 still would still already be the largest funding year with almost $560M in funding to payments from deals involving corporations and their venture arms through 11/25/15. 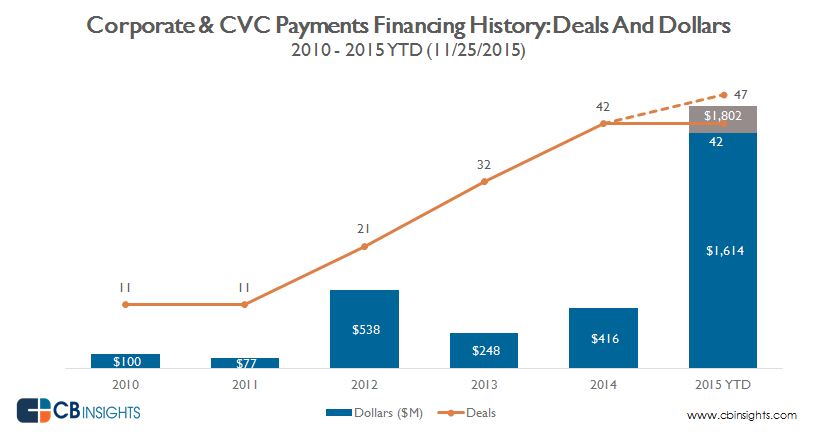 Q3’15 saw record funding from deals involving corporates and CVCs investing in payments, with $794M invested across 10 deals. The last 4 quarters have each seen over $200M in funding.

On a quarterly basis, 4 out of the last 5 quarters have each seen more than 10 deals involving corporates, with Q3’14 reaching a record high of 16 deals. 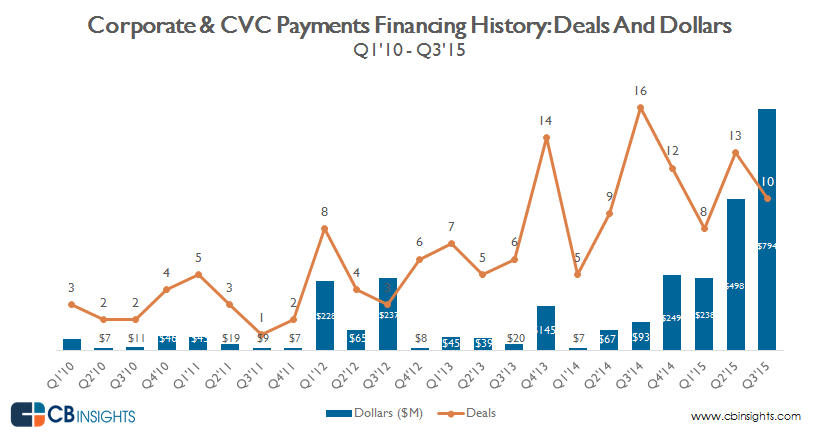 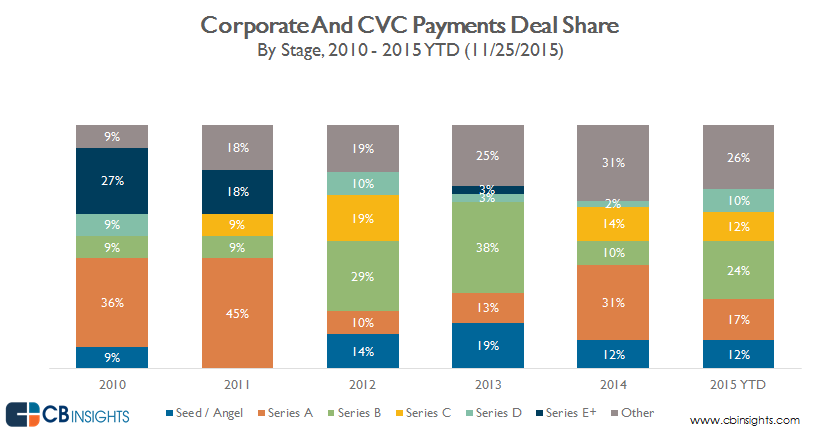 Intel Capital was the most active CVC or corporate investing in payments startups in 2015 YTD. Some of their investments include point-of-sale solution iZettle and mobile payments startup Fortumo. The next three spots were taken by the three largest credit card companies, which are either investing as corporations or have dedicated investment arms: American Express Ventures, Visa, and MasterCard Worldwide.

Want more data and analytics on the payments space? Check out the CB Insights Venture Capital Database. Sign up free below.