The consumer packaged goods category grabbed headlines in Q3’16 with Unilever’s $1B acquisition of the Dollar Shave Club. The acquisition ranked as not only one of the largest CPG acquisitions in recent history, but also the fourth largest e-commerce deal since 2009. Unilever continued its buying spree with the acquisition of green cleaning products brand Seventh Generation in September, in a deal valued between $600-$700M. Meanwhile, news reports suggested that The Honest Company was also considering an exit.

However, beyond these buzzworthy deals, CPG startups faced a difficult funding environment in Q3’16. Sector deal count continued its slide from the previous quarter, dropping to a three-year low.

Deals to consumer packaged goods companies peaked in Q1’16 at 135 but have steadily fallen since then. Over the past two quarters, deal count dropped by nearly a third to 91 in Q3’16—the lowest number of deals since Q3’13. Funding also fell, to $256M, from $399M in Q2. Q1 saw a lower funding total ($283M) than Q2, despite the high in deal count, and this resulted in lower medial deal size in the quarter as well. Q3’16 marks the first time over the past five years that CPG deals have fallen for two consecutive quarters.

Deal sizes in Q3 were more evenly distributed, and Q3 saw a higher median deal size than did Q2 (approximately $700K vs. $500K). 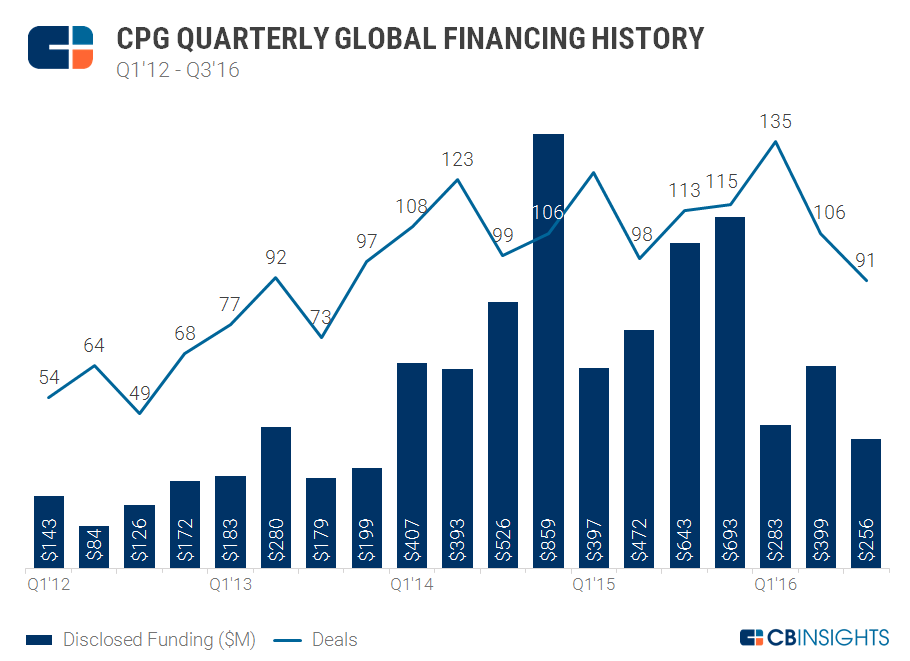 If CPG deals continue at their current rate, they should see just a slight dip in full-year 2016, to approximately 440 deals from 451 deals in 2015, with the spike in Q1 helping balance out the dramatic drop in Q2 and Q3. However, if deals continue trending downward as they have during the past two quarters, the full-year total may be much lower. Dollar funding is on track to decline to well below 2014 levels.

Deals and dollars both eeked out record highs in 2015, when private companies received over $2.2B of investment across 451 deals. 2015 funding increased just 1% over 2014, while deal count grew 3%. 2015 saw several notable $100M+ mega-rounds, including a $150M corporate minority investment by Coca Cola into juice brand Suja Life, and a $100M Series D to The Honest Company. 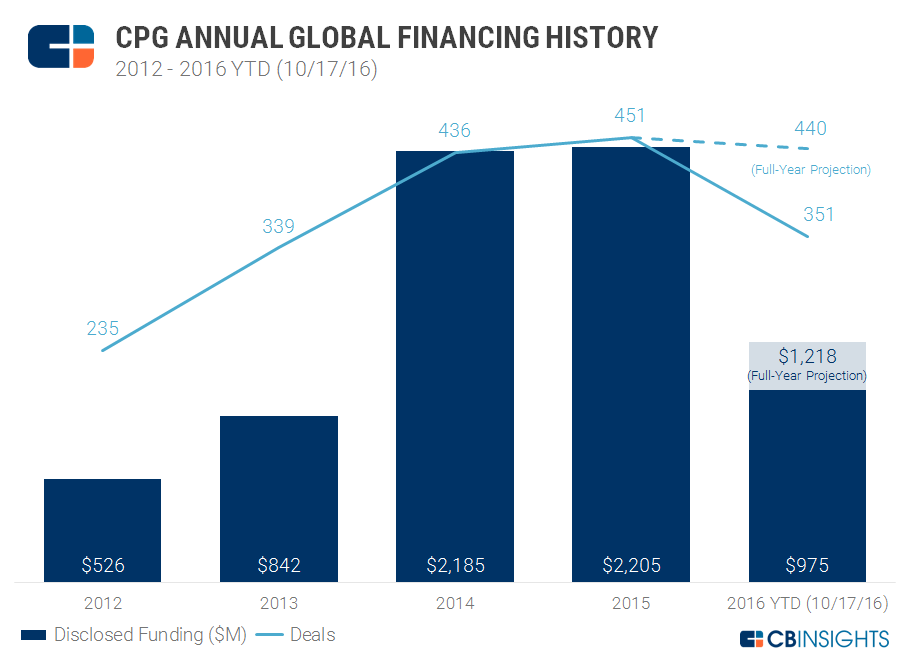 Want more funding data on consumer packaged goods companies? Log in to CB Insights or sign up for free below.