Research Brief
1295
Billion dollar startup valuations are more common today, and the data says consumer tech companies have an easier time getting there.

Consumer tech startups may capture all of the headlines, but does hype translate to an easier path to a billion dollar valuation? It turns out, it might.

Using CB Insights financing data, we looked at the total funding required to hit the billion dollar valuation mark. What the financing data reveals is that non-consumer focused tech companies generally have to raise more before getting to the $1 billion valuation mark.  In fact, median total funding before the company’s first $1B+ valuation round was 26% higher for non-consumer focused tech companies versus their consumer counterparts. 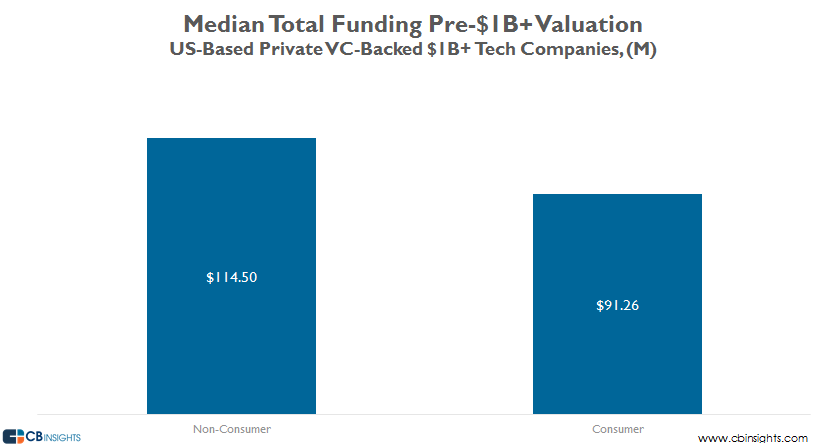 On the consumer side, Dropbox had the lowest total funding before its Unicorn round, as they raised just $7.22M before their $250M Series B, which valued the company at $4B and which featured participation from Sequoia Capital, Accel Partners, Benchmark Capital, and others. AirBnB was the only other company that reached a $1B+ valuation with under $10M in venture capital, as the home- and room-sharing marketplace startup raised just $7.82M before its $112M Series B which valued them at $1.3B. Notably, both of these companies were out of accelerator Y Combinator. 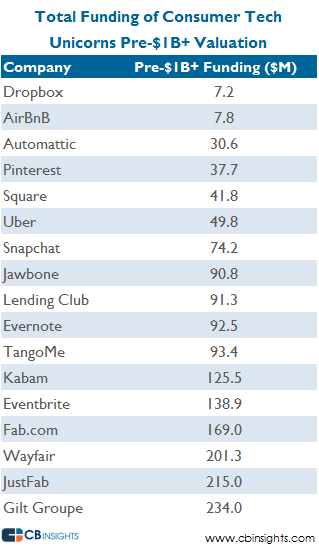 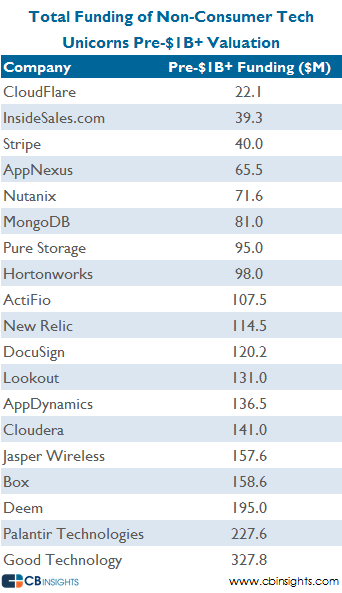 Sequoia Capital has invested in the most US consumer tech billion dollar companies along with T.Rowe Price, while on the non-consumer end, T.Rowe Price and Greylock Partners topped the list.

T.Rowe Price, a leader in the trend of mutual and hedge funds investing in startups, topped both lists with investments in Lending Club, AirBnB, Dropbox, Evernote, Eventbrite, and Wayfair on the consumer side, and Lookout, MongoDB, New Relic, Pure Storage, and Cloudera on the non-consumer side.

Also of note, 3 non-VCs topped the list on the non-consumer side, with Salesforce (MongoDB, InsideSales.com, DocuSign, Box) and In-Q-Tel (Pure Storage, Palantir, MongoDB, Cloudera) holding four investments each in addition to T.Rowe Price. 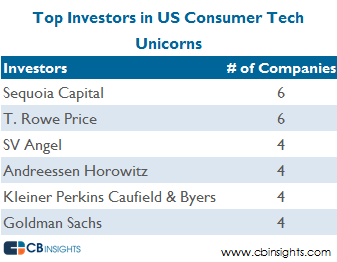 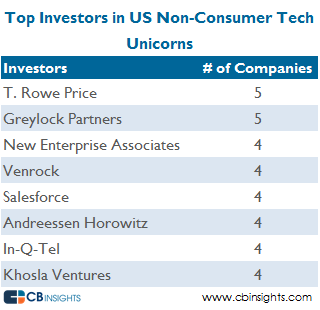 Want data on the fastest-growing private companies. Login to CB Insights venture capital database or create a free account below.

*All data is as of August 31st, 2014. While we classified Dropbox as a consumer tech company, we recognize that for some companies the distinction is not perfect, as their use-cases are not black and white in terms of consumer vs non-consumer. Spinoffs or spin-out companies such as Fanatics (which came as the result of an eBay spin-out) which may be worth over $1 billion were not included in this analysis.