The CB Insights Consumer Smart Money list contains the world's best-performing VC investors in the broader consumer space. We analyze their early-stage investment portfolios to identify where they see opportunity and risk.

The consumer space has emerged as a key area for VC investment.

Fast-changing consumer behaviors such as smartphone adoption, the use of social media, and a rising focus on health & wellness have created lucrative investment opportunities for early-stage investors across the broader consumer space — including startups operating in retail, supply chain & logistics, wellness, CPG, and travel, among other categories.

But which VC firms are consistently finding the next consumer superstars before they hit it big?

Using the CB Insights database, we surfaced the top 25 VCs for consumer investment out of thousands of firms to create a “Consumer Smart Money” list.

Many of the game-changing consumer startups of the 2020s could emerge from the portfolio companies of these Smart Money firms, making this list a powerful filter for uncovering startups and industries that could change the world over the next decade.

The heatmap below shows how the early-stage deal concentration from these investors has shifted in the last 5 years across 15+ investment categories. 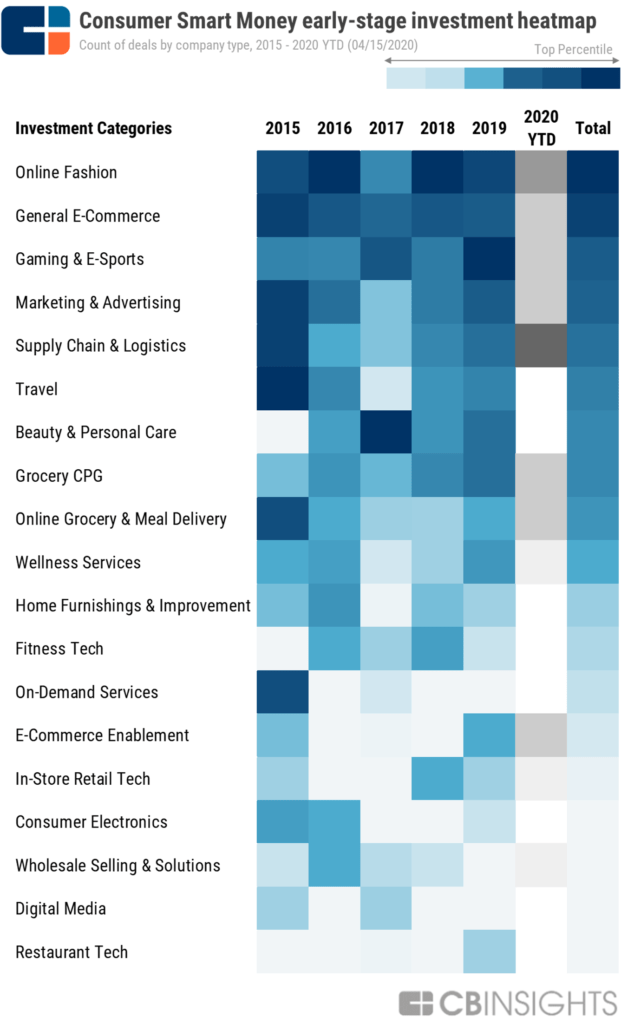 Investment categories are ranked by percentile within each calendar year, based on the number of deals with participating Consumer Smart Money investors.

Among these investment categories, health & wellness areas like beauty & personal care and fitness tech are on the rise, while areas like on-demand services and online grocery have lost some traction with these investors. 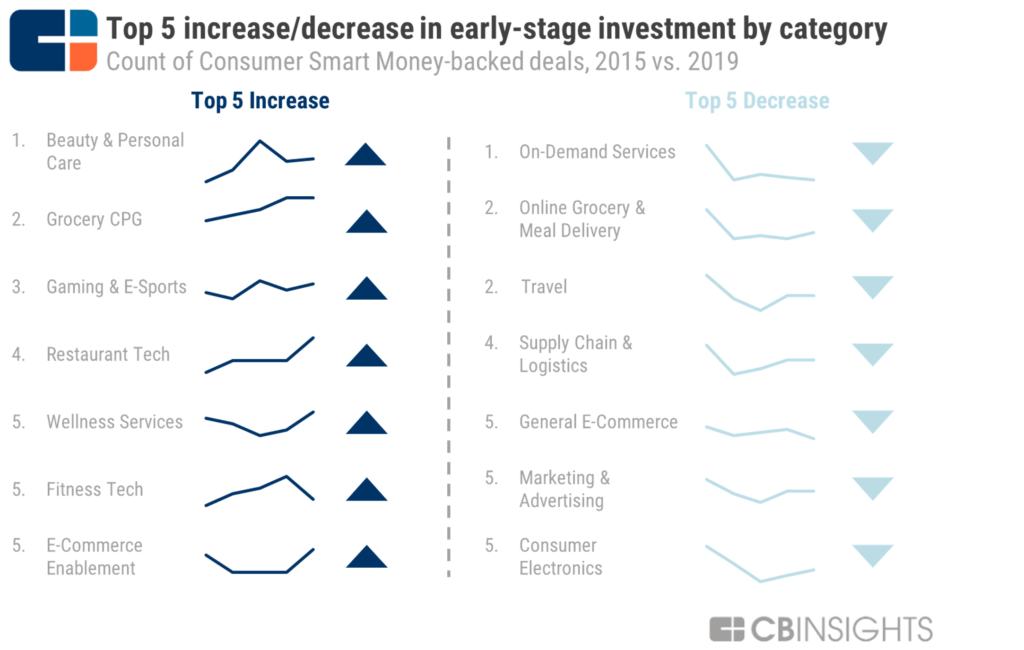 See the methodology section at the bottom of this post for the full Consumer Smart Money VC list.

Using the Consumer Smart Money VC list, we analyzed how early-stage investment activity has changed over the past 5 years and uncovered the following key takeaways:

While there is territory we don’t cover explicitly in this analysis (e.g. general e-commerce, digital media, and marketing & advertising), we believe that the 5 trends presented below are the most relevant to the consumer space today.

As the number of consumer unicorns increased over recent years — including high-profile startups like Impossible Foods, Glossier, and Calm — so did investors’ interest in the space.

While the annual number of early-stage deals with Consumer Smart Money participation is down nearly 20% since 2015, it bounced back from a 5-year low of 99 deals in 2016. Recent deals were also larger in size than in 2015 on average, with annual funding with Consumer Smart Money participation increasing steadily over the last 5 years to reach $1.6B in 2019. 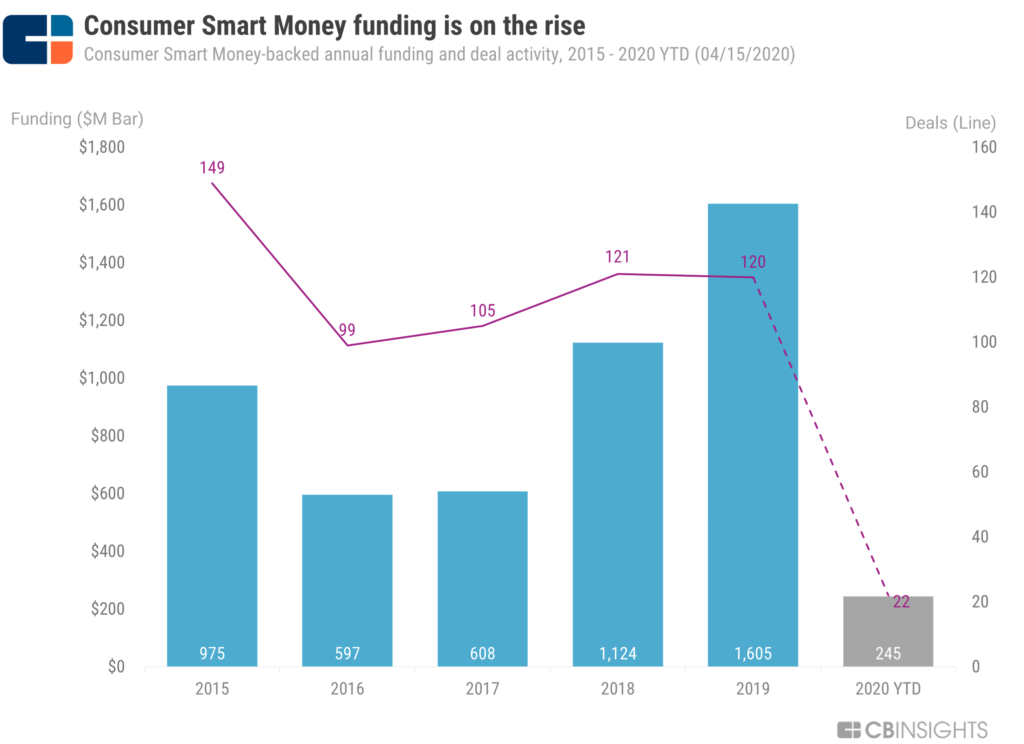 However, 2020 is set to be a transitional year for the consumer space.

Poor performance from recent consumer IPOs such as mattress company Casper — which went public in February 2020 at less than half the value it was given during its Series D funding round a year prior — has cast a shadow over the direct-to-consumer (D2C) space for investors seeking big exits.

Now, a number of high-profile D2C startups are dealing with a sudden drop in activity due to Covid-19. Consumer Smart Money-backed luggage startup Away, for one, disclosed more than a 90% decrease in sales, furloughed half of its employees, and laid off a further 10% of its staff.

At the same time, the massive increase in online grocery shopping is driving new customers to companies like Instacart, which received backing from Consumer Smart Money VCs Sequoia Capital and Khosla Ventures during its Series A round. The company added 300,000 new workers in March 2020 with plans to recruit another 250,000.

As the year progresses, expect some areas of the consumer space to experience soaring interest while others fall flat — and watch for retailers and brands to shift priorities accordingly.

2. HEALTH & WELLNESS is ON THE RISE

Just as the number of consumers looking to spend on health and general wellbeing has risen, interest from Consumer Smart Money VCs in the sector has grown.

Health & wellness startups — including those in categories like beauty & personal care, wellness services, and fitness tech — have been a bright spot for investment over the last 5 years, raising twice as many early-stage deals with Consumer Smart Money participants in 2019 compared to 2015. 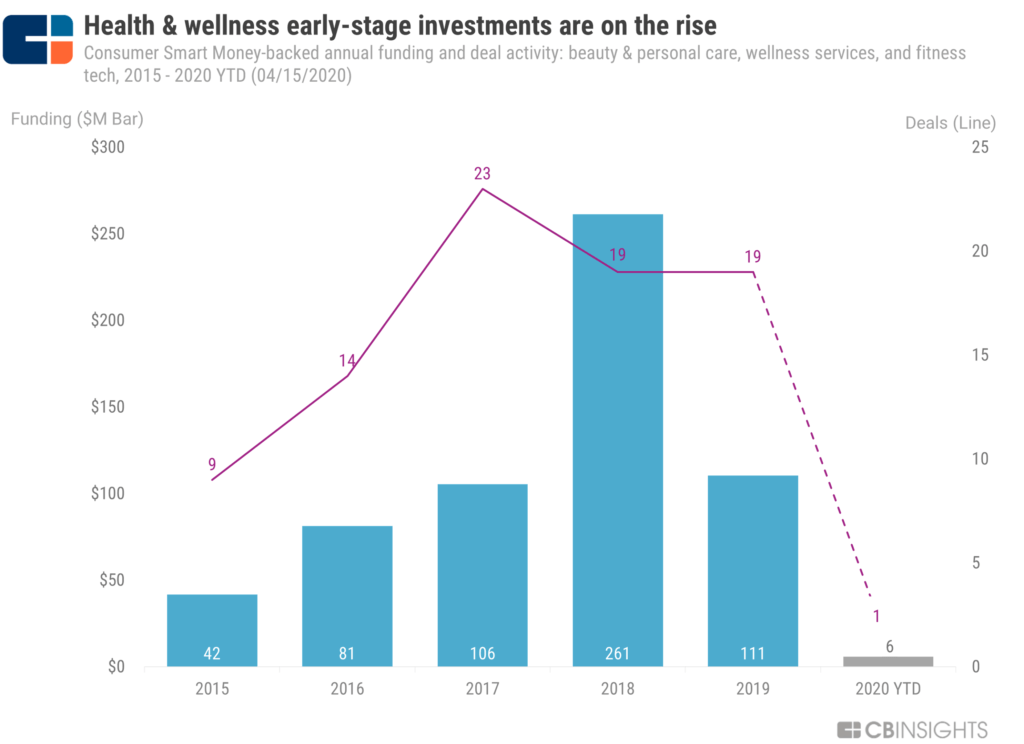 A number of Consumer Smart Money-backed startups have contributed to the rise of beauty & personal care trends such as clean beauty (Versed, By Humankind), hyper-personalized products (Prose, Function of Beauty), and content-driven brands (goop, Glossier).

Content has become a key success factor in the fitness space as well, boosting the adoption of at-home fitness solutions.

Attracted by the greater predictability of subscription-based models, Consumer Smart Money VCs have also extended their bets in the wellness services space.

For example, Insight Partners invested in meditation app Calm’s Series A round in 2018 at a valuation of $250M. A little under a year later, Calm became a unicorn, with a new round of financing valuing the startup at $1B.

So far, health & wellness segments appear to have been mostly spared from the economic fallout of the coronavirus pandemic, with millions of consumers turning to online fitness or meditation content while confined to their homes.

3. GAMING AND E-SPORTS ARE BECOMING MAINSTREAM

Gaming and e-sports startups have seen sustained investment from Consumer Smart Money investors, which participated in 53 early-stage deals since 2015 across the entire ecosystem including game development, streaming services, and virtual goods, among other areas. 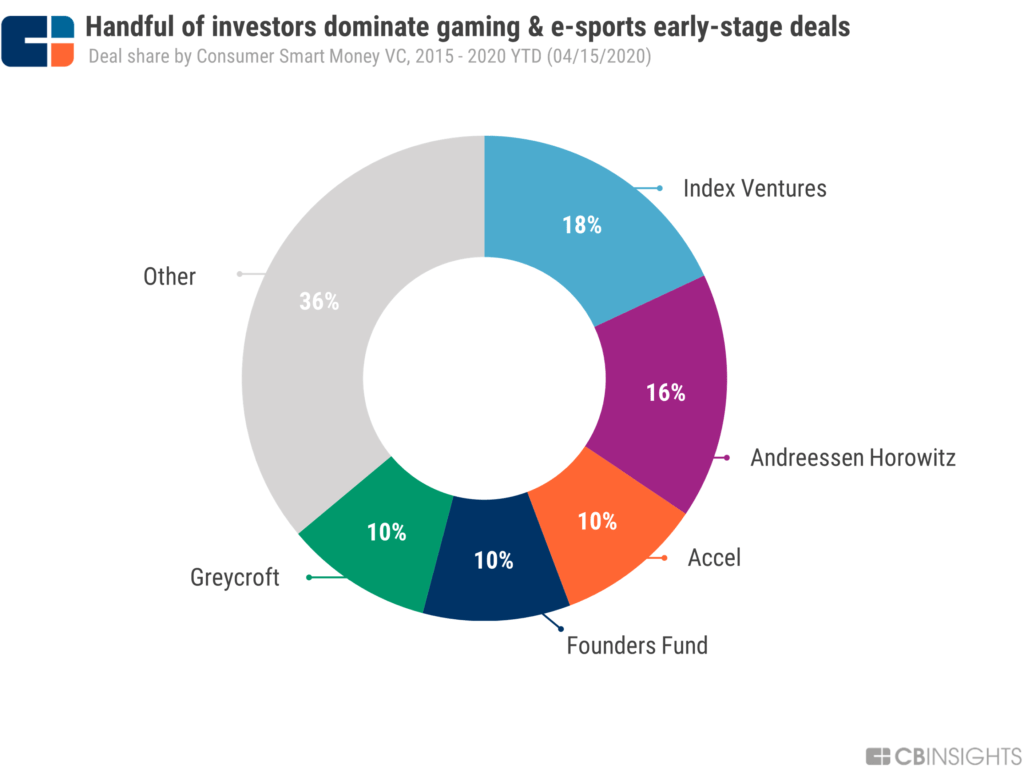 Mobile gaming has emerged as a hotspot for Consumer Smart Money VCs, attracting half of their total early-stage gaming & e-sports deals since 2015. Brazil-based mobile game developer Wildlife Studios, for instance, entered the unicorn club with a $1.3B valuation when it raised a $60M Series A in December 2019 with participation from Consumer Smart Money investor Bessemer Venture Partners.

Compared to console or PC games, mobile games can tap a large potential revenue pool by being accessible to those that haven’t invested in dedicated equipment. These games are also often free to play, with revenue being generated by tactics such as selling in-game virtual items like accessories and clothes for characters.

Reflecting this trend, Consumer Smart Money VCs have also placed bets on blockchain-based platforms for virtual goods to facilitate the purchase, storage, and trade of these items. Dapper Labs and Magic Cube, two companies in this space, have both raised from Consumer Smart Money investors. Dapper Labs recently partnered with the NBA to create collectible player highlights that can be purchased, sold, and used in online games.

As the gaming & e-sports space continues to broaden its audience and add social features, it is emerging as a powerful way for brands and retailers to engage with consumers. Anticipate this trend to add a new source of revenue for gaming & e-sports startups, while also increasing their appeal to a broader range of potential acquirers.

Consumer Smart Money investors funded 16 early-stage companies in the e-commerce enablement space across 19 deals in the past 5 years.

With a soaring number of consumers shopping online, especially on mobile, solutions that facilitate e-commerce for both buyers and sellers are gaining traction. These companies offer easy checkout solutions and personalized recommendation engines, as well as facilitate cross-border commerce, among other services.

Improving online conversion with personalized recommendations is a particularly hot topic for brands and retailers, and is also an attractive investment opportunity for VCs.

Lily AI and The Yes have both raised seed and Series A rounds over the last 3 years with participation from New Enterprise Associates to offer such solutions.

Founded by Stitch Fix former COO Julie Bornstein, The Yes looks to address the “paradox of choice” that can overwhelm apparel shoppers by working directly with brands to build an AI-powered platform that delivers product recommendations.

Consumer Smart Money VCs are also hoping to benefit from the rise of e-commerce through the convergence of online and offline shopping experiences.

Lightspeed Venture Partners-backed Obsess, for instance, aims to enhance the e-commerce experience with 3D features allowing shoppers to see and compare multiple items, similar to how they might in a store. The company is also using this technology to create virtual versions of brick-and-mortar stores that users can shop online. Obsess has partnered with brands such as Farfetch, Levi’s, and Tommy Hilfiger, and claims that conversion rates can increase up to 70% from using its services.

These e-commerce enablement solutions stand to grow in relevance and traction as the online retail market share increases.

Once attractive as an emerging space, the online grocery & meal delivery category has seen the participation of Consumer Smart Money VCs in early-stage deals plummet over the last 5 years, with only 6 early-stage deals in 2019. 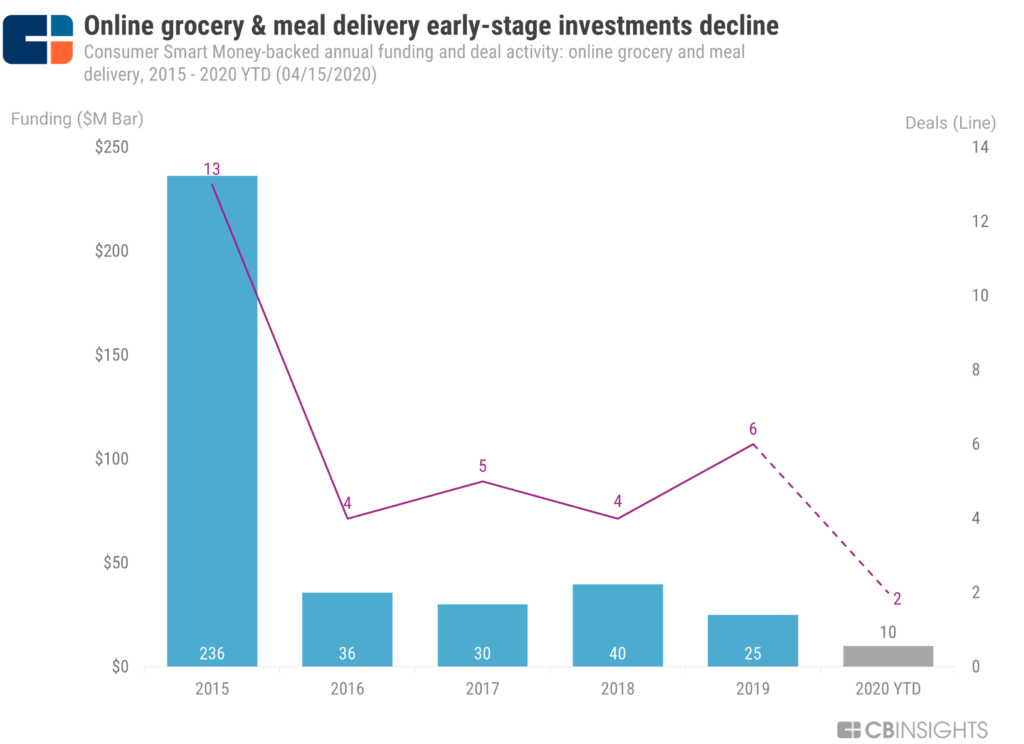 The slowing Consumer Smart Money momentum is particularly notable for the meal delivery category, which has attracted less than a third of all early-stage deals from these investors in this space.

Significant weaknesses in the underlying business of meal kits were highlighted by the public listing of Blue Apron. The company, which raised a Series A round in 2013 with participation from Consumer Smart Money VC Bessemer Venture Partners, has seen its market value decline by over 90% since its 2017 IPO.

Online grocery has emerged as a brighter spot for Consumer Smart Money VCs, with a number of successful exits from early-stage investments made in this space over the past 5 years.

For example, 6 out of the 25 Consumer Smart Money VCs — including Accel, Forerunner Ventures, and General Catalyst — invested at an early stage in Jet.com. The company was acquired by Walmart for $3.3B in August 2016.

A year later, Target acquired on-demand grocery delivery Shipt for $550M. The company had raised a Series A round with participation from Greycroft in 2016.

The most promising startup founders are often drawn to top-tier VC firms because of their reputation, resources, access to talent, and past performance. Our methodology for the Consumer Smart Money list captures these various factors and goes beyond the returns and prestige rankings used for many comparable lists.

The Consumer Smart Money list is an unranked collection of the top 25 venture capital firms worldwide for investing in the consumer space. We crunched the numbers for over 2,200 VC firms in the CB Insights database to surface the highest performing investors based on our methodology (more on that below).

We define the broader consumer space as being inclusive of B2C and B2B startups operating across retail, supply chain & logistics, wellness, CPG and general merchandise, media, marketing, entertainment, and travel.

WHAT MAKES A VC “SMART”?

Our methodology factors in portfolio company outcomes, the ability to consistently deploy capital, and portfolio quality. These factors capture the combination of a firm’s network and access, scale and repeatability, and profitability that make VCs “smart.”

WHAT CAN I DO WITH THIS COLLECTION?

The Consumer Smart Money list is available on the CB Insights platform as an Expert Collection, which can be used as a filter for deal and company searches. Rather than publish a standalone, prestige list, we want the Consumer Smart Money Expert Collection to be used as a tool to help our clients surface high-quality companies and emerging industries.

Which VC firms are on the Consumer Smart Money list?