Research Brief
3537
Hungry corporates are driving a global surge in acquisitions of consumer goods startups, led by the food & beverage and apparel segments.

The number of  M&A deals globally targeting consumer goods companies has risen consistently since 2010. At the same time, the acquirer pool is tilting dramatically, as corporations now account for the lion’s share of acquisitions whereas before private equity firms dominated in M&A.

We used our CB Insights database to put together this deep dive into acquisitions of consumer goods companies over the past ten years. This post includes data on consumer sector M&A activity over time, M&A deals by segment, acquirer types, top acquirers over time, and acquisitions of VC-backed vs. non-VC-backed companies. Scroll down to learn more.

To learn more, sign up for a free CB Insights trial.

Global M&A activity among consumer goods companies has skyrocketed over the past several years. In 2015, M&A deal count set a new record of 792, and the sector is on track to surpass that in 2016. In the five full years since 2010, consumer M&A activity grew over 700%.

M&A deals bottomed out in 2009 amid the recession in the US and Europe. Since 2009, consumer M&A activity has grown significantly every year, though its rate of growth may be slightly tapering off. 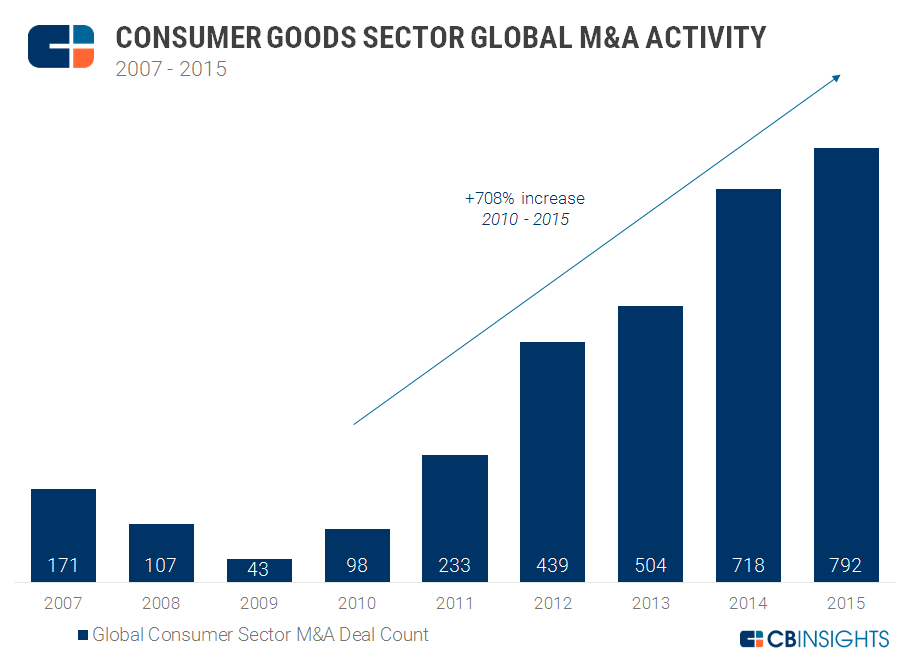 While deal growth is strong overall, the trends vary by consumer categories. Since 2008, the food & beverage segment has held the lead for M&A activity within the consumer category. Food & beverage M&A deals have increased every year since 2009, and are on track to reach a record high of 260 deals in 2016, widening the gap with apparel, which is the second-most active category.

The apparel & accessories industry has consistently ranked second in terms of M&A activity, though it has not ratcheted up M&A activity at the same steady pace as the food & beverage sector. Last year, the segment saw 163 M&A deals, but activity slowed this year. 2016 is on track to see fewer than 150 deals.

Apparel & accessories is one of two cub-categories within consumer goods on track for an M&A decline this year, along with Other (a category that includes a variety of niche brands).

See the full chart below. In the chart legend, categories are listed left to right in order of their 2016 projected ranking in M&A activity. 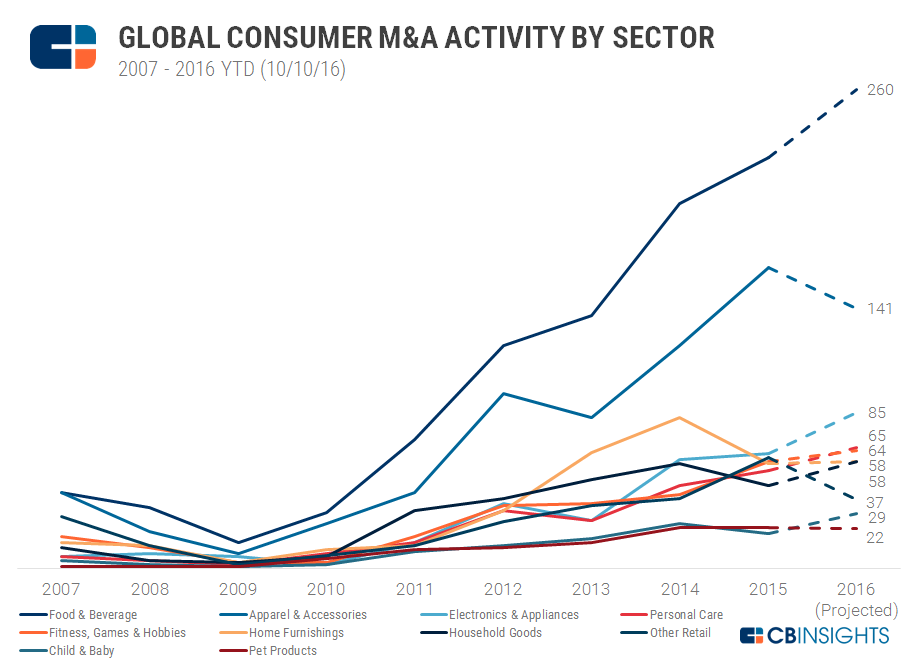 Acquirers in the “Other” category have hovered around 10% each year — the category includes holding companies, asset management firms, and others. 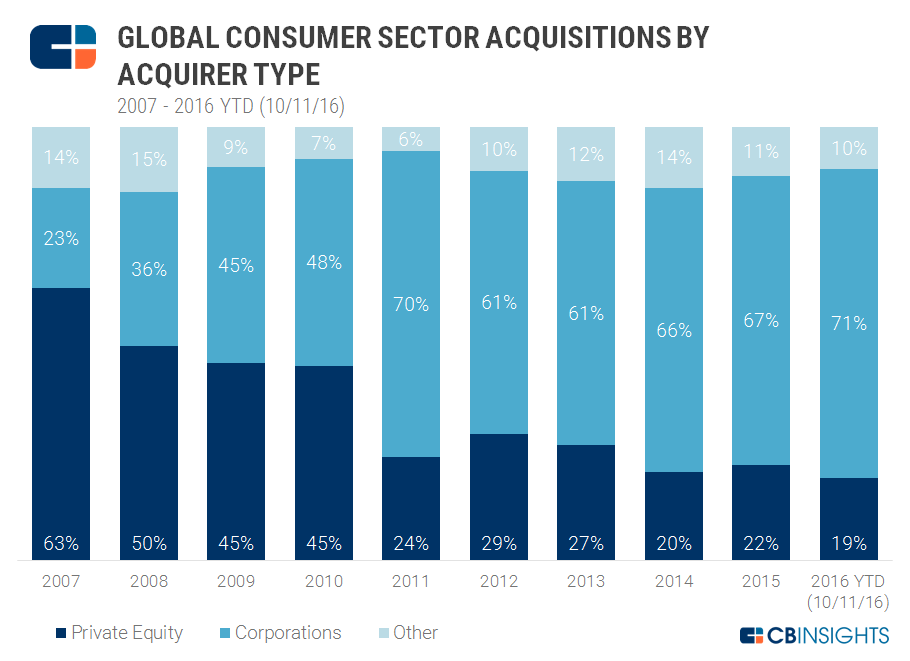 Most active acquirers shift from internet companies to consumer brands

More broadly, we see a sector shift; the 2007-2011 list was crowded with private equity firms and internet companies, while the more recent list more heavily tilts toward consumer brands and big food. Amazon topped the 2007-2011 list with nearly 10 acquisitions within our selected consumer categories. Zappos, the online shoe retailer, represented Amazon’s largest acquisition in the period with a $1.2B price tag, in July 2009 (some e-commerce subcategories, including apparel, electronics, personal care, and home furnishing are included in our consumer goods category as the lines have begun to be blurred between consumer goods and e-commerce, with many e-commerce sites launching their own brands).

Media and internet conglomerate Naspers ranked second, with a variety of e-commerce apparel acquisitions in Europe and South America. Gun maker Remington Arms tied for third with several private equity firms, and with the exception of apparel company Kellwood, we see private equity firms making up the remainder of the list.

In the more recent 2012-2016 period, AB InBev rose to the most active acquirer spot. The beer giant’s activity took off significantly in 2014, and over the past few years it acquired nearly 20 private breweries and alcohol brands. About half its targets were in the US and half international.

Camping World, a Kentucky-based chain retailer of camping and outdoors gear, placed second with over 10 acquisitions of other camping gear retailers and RV brands. Private equity firm KKR placed third, followed by Unilever and private equity firm Equistone Partners Europe, which tied for fourth. Lower down, we see another food company, B&G Foods, which acquired CPG companies including the iconic Green Giant canned vegetables brand. Overall, the food and beverage sector plays a far larger role in the more recent top acquirers list than it did in 2007-2011.

VCs have yet to capitalize on exit growth

With this boom in consumer company acquisitions, are VC investors raking in returns from big exits? The answer is not necessarily, or at least, not yet. VCs have generally been less involved in the consumer goods segment, compared to software businesses. We’ve delved into the full landscape of VC-backed exits in the tech sector here.

Over the past ten years, the proportion of consumer sector acquisitions that targeted VC-backed companies has remained relatively low. For the past six years, it has hovered below 10% of the total.

The proportion of VC-backed consumer exits did increase during the recession and its immediate aftermath, in 2008-2010. This is partially because there were so few exits during those years, as we’ve seen in the data above. It may also be related to the fact that internet-focused companies were active in those years, and were acquiring. VC-backed consumer exits in 2010, for example, included Amazon’s acquisition of BuyVIP for roughly $96M and Thrillist’s acquisition of JackThreads for an estimated $10M.

This year, we may be seeing a slight uptick in acquisitions of VC-backed companies, alongside some particularly buzzworthy deals. Unilever’s $1B acquisition of Dollar Shave Club, for example, marked the largest VC-backed CPG acquisition in recent history. 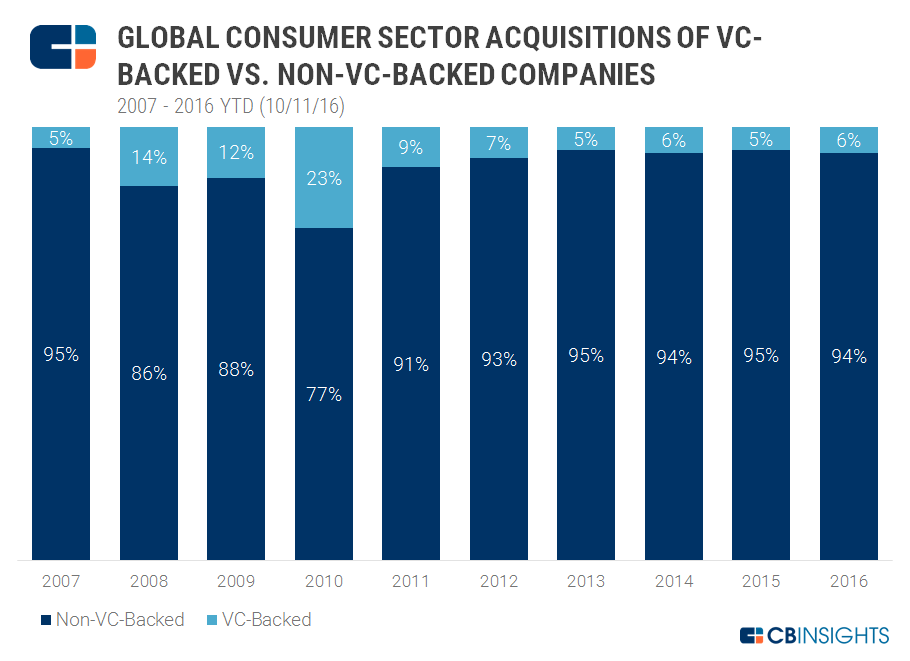 Want more data on private company M&A activity? Log in to CB Insights or sign up for free below.