Research Brief
2318
This year has so already seen more than $1.3B invested in consumer electronics startups, the first time in at least 5 years that funding has topped $1B.

The Fitbit IPO showed that despite the capital intensity and scaling difficulties associated with hardware-based businesses, successful consumer electronics companies are able to produce big returns for their investors.

With the annual Consumer Electronics Show coming up this January, we decided to take a look at how funding to consumer electronics companies has fared in the last few years, using CB Insights data.

This year has so far already seen a 57% year-over-year increase in the number of deals and more than $1.3B invested, the first time in at least 5 years that funding has topped $1B. In fact, there have been more consumer electronics deals in 2015 than in the four years between 2010 and 2013 combined. The pace of investment has increased markedly in the last two years, with sensor and electronic part costs falling and wearables picking up steam. 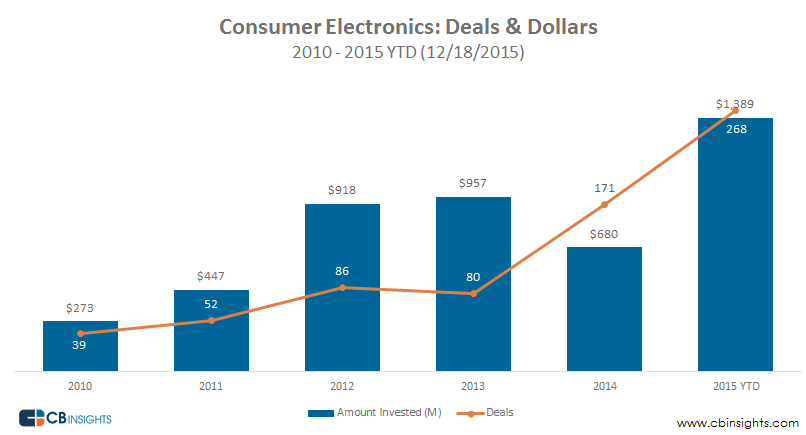 Deals in the “other” category — which includes deals unattributed to any particular round — have generally commanded the second-highest percentage of deal share. 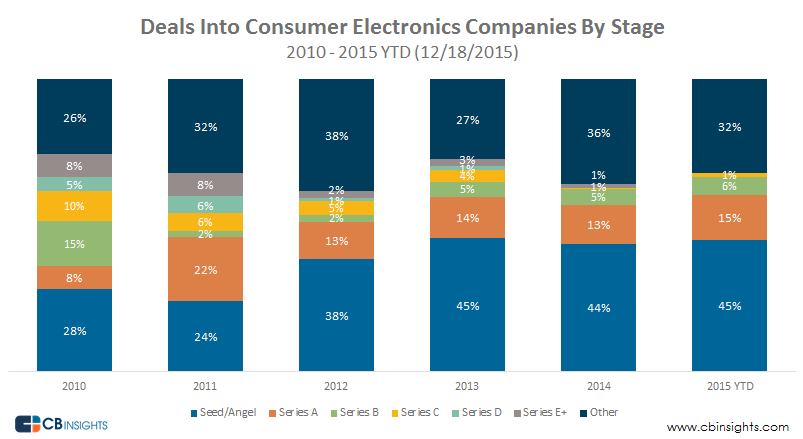 The most active investor by far into consumer electronics companies was hardware accelerator HAX, which has invested in more than 45 companies since 2010. Several other accelerators populate the list including Y Combinator and TechStars, as well as hardware-dedicated accelerators like Highway1.

Among institutional investors, Intel Capital tops the list investing into portfolio companies including Razer and Skully Helmets. Other non-corporate VCs on the list include Kima Ventures, Foundry Group, and New Enterprise Associates (among others). It should be noted that crowdfunding sites like Kickstarter and Indiegogo are among the most popular initial fun-seeking platforms for consumer electronics companies, and allow them to raise capital for production runs as well as assess demand and prove product-market-fit.

Exits have also been on the upswing, with 2015 reaching a high of 41 exits, more than any of the previous 5 years. Fitbit’s has been the largest exit in the space. The company was valued at $4.1B in its 2015 IPO. GoPro originally held the title, with a $3.1B valuation at the time of it’s IPO in 2014 (though the stock has tumbled in the public markets since then). There have not been many large exits in the space, with less than 30 $100M+ exits happening since 2010. However, as wearables and more IoT products increase in popularity, we can expect to see more exits happening in the future. 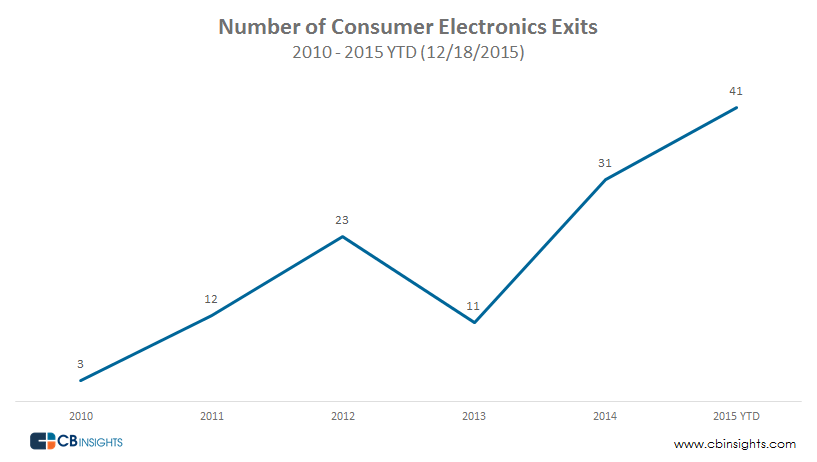 *Analysis did not include debt or grant rounds. Analysis was of first exits only.

Want more data on consumer electronics? Check out our venture capital database below.