Q1'17 marked the fourth consecutive quarter of deal growth, but Q2 is on track for a significant slowdown.

Tech companies are continually looking at more industrial, asset-heavy industries where they can make processes more efficient and streamlined, and construction is one area that has seen increased investor interest as more companies move to digitize the sector.

While funding to construction tech lags that of other industries, the industry has grown in recent years. Since 2013, the construction tech industry has seen $1.08B invested across 207 deals. Investors have financed a variety of areas within construction tech, with a notable increase in financings towards mobile and cloud-based collaboration platforms, online marketplaces for equipment and building materials, and frontier tech solutions leveraging drones and AR/VR.

We used CB Insights data to dig into annual and quarterly investment trends as well as deal share and geographic distribution.

We define construction tech as startups working on construction design, team collaboration, and project site-management, as well as those using drones and big data analytics primarily to transform the traditional mapping and surveying of construction sites.

2017 has already seen approximately $169M in disclosed equity funding invested in construction tech companies across 25 deals. The vast majority of that funding total was driven by a single deal to construction tech unicorn Katerra in a $130M Series C round in Q2’17. At the current run-rate, 2017 is projected to see $375M invested across 56 deals, representing a 7% increase in funding and a 7% decrease in deals from 2016.

2016 marked a high in deals to construction tech, beating 2015 by just one deal, but the year saw a decline in funding of nearly 20%. 2015 saw a record for funding with $425M invested. The funding high can be attributed to larger deals to a few companies including an $80M Series D round to mobile CAD software provider Onshape, a $50M Series F round to construction project management firm Procore Technologies, and a $40M Series B round to document collaboration platform Plangrid. 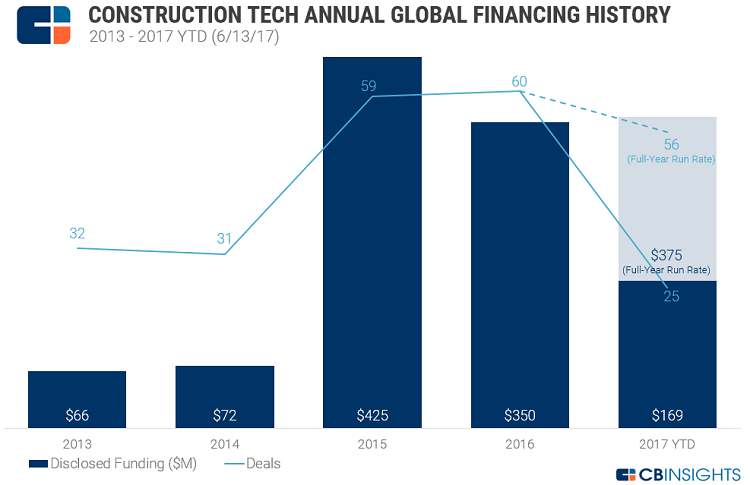 Drilling into quarterly data, construction tech has seen a steady rise in deals since Q2’16. Q1’17 reached a quarterly deal high, with $34M invested across 20 deals. Out of the 20 deals in Q1’17, over 75% of total quarterly funding went to Missouri-based construction equipment company EquipmentShare in a $26M Series B round with participation from Insight Venture Partners, Romulus Capital, and Y Combinator.

Thus far, Q2’17 is on track for a significant slow down in deal pace. Through the first half of June, there have been only 5 deals. However, due to Katerra’s Series C, mentioned above, the quarter is already the second-highest funding quarter for the category.

Q1’16 still retains the quarterly record for funding, with $174M invested across 15 deals. The aforementioned construction services provider Katerra raised 2 rounds that quarter including a Series A round of $51M and a Series B round of over $75M by multiple investors including DFJ Growth Fund, Foxconn Technology Company, and Khosla Ventures, among others. Cloud-based construction project management firm Procore Technologies also raised a second $30M tranche of a Series F round, with participation from Bessemer Venture Partners and O’Connor Ventures. 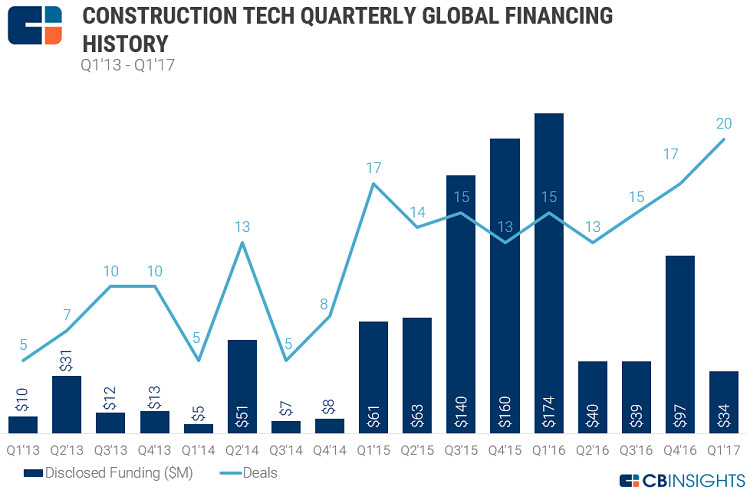 Later stage deals (Series D & E+) have held relatively steady since 2014, fluctuating between 7% and 9%. So far this year, there have been no Series D deals, while Series E+ accounts for 8% of total deals.

Deals to our “Other” category (including convertible notes, private equity, other venture capital, etc.) have seen some fluctuation since 2013, having dipped from 31% in 2015 to 10% in 2016. 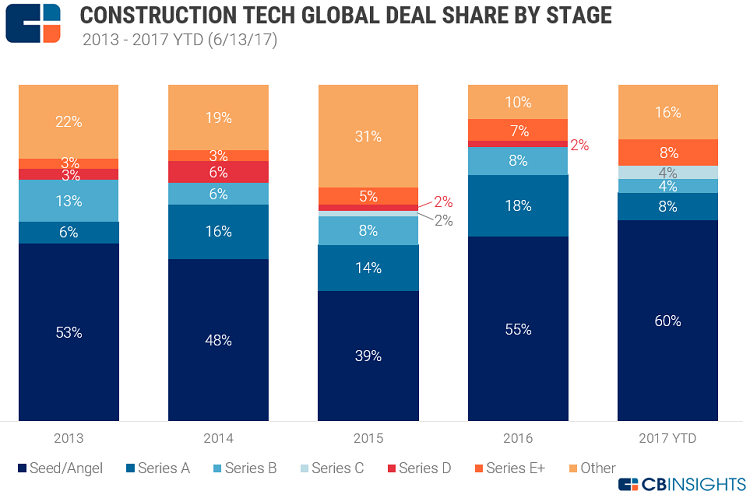 The US dominates the global construction tech industry, accounting for over 66% of global deal share. Digging into top US regions, California accounts for the greatest percentage of deals, at 37%, while New York takes second place with 16% of deal share, and Massachusetts comes in third with 9% of deal share. 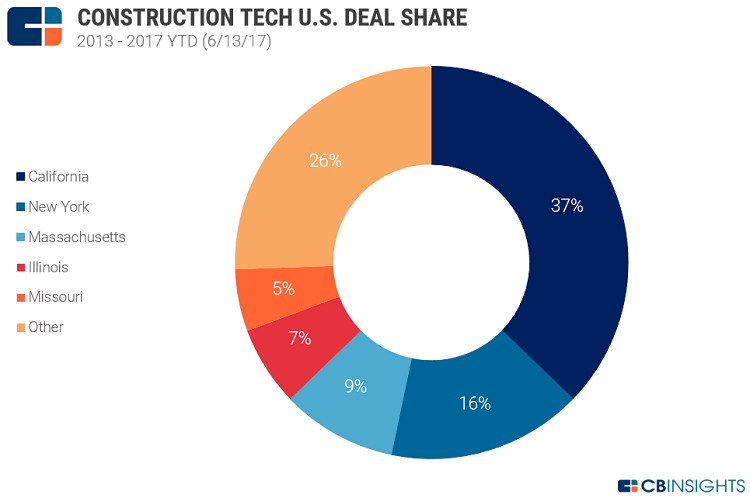 Want more data about construction tech startups? Log in to CB Insights or sign up for free below.