Research Brief
3095
Deal activity also declined, with Q2'16 seeing 8 deals to construction tech startups compared to a peak of 12 deals in the prior quarter.

To get a better sense of activity in the space we used CB Insights data and analytics to dig into quarterly investment trends as well as some of the most well-funded construction tech startups to date.

Construction tech startups are working on construction design, team collaboration, and project site-management while other startups are using drones and big data analytics to revolutionize the traditional mapping and surveying of construction sites.

In Q2’16, investment activity to construction tech dropped significantly quarter-on-quarter with startups raising $13M across 8 deals (compared to a peak of 12 deals in Q1’16). This broke a streak of 5 straight quarters with 11+ deals. In fact, Q2’16 represents the lowest quarterly deal count since Q4’14.

On a positive note, funding levels are still healthy when looking at the longer-term historical picture. The first half of 2016 has already surpassed 2014 in terms of funding. 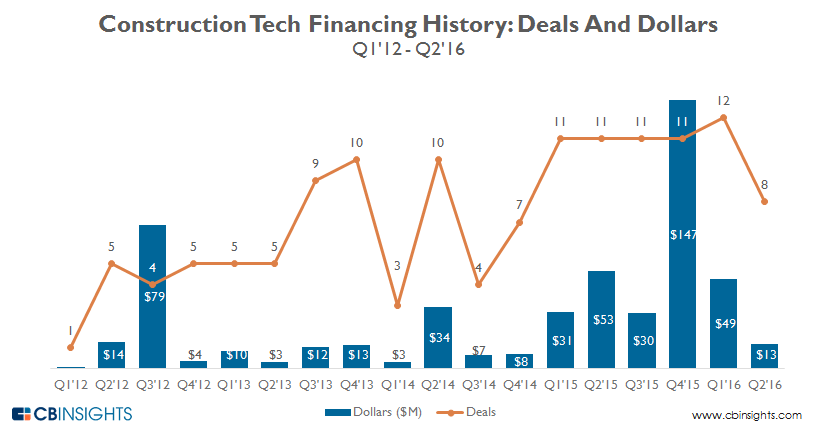 Despite being a nascent industry, two of the top 10 construction tech startups have raised more than $100M in total disclosed funding.

The most well-funded startups include PlanGrid, which raised one of the largest construction tech rounds in history — a $40M Series B in November 2015 from Tenaya Capital, Sequoia Capital, Founders Fund, Northgate Capital, and Y combinator.

Want more data about construction tech startups? Login to CB Insights or sign up for free below.