Construction tech startups saw an increase in annual VC deals from 2015 to 2018, but the pace of activity has since slowed. However, the integration of a slew of new frontier technologies is pushing a rebound in funding this year.

Construction tech startups are on track to see another yearly decline in deals this year following a peak in 2018. Despite the expected decline, however, funding appears to be bouncing back, driven by the integration of frontier technologies — such as AI, robotics, and 3D printing — into the construction process.

Below, we take a closer look at funding trends in construction tech.

25 Industries & Technologies That Will Shape The Post-Virus World

Get the free download to learn how industries are using tech to reimagine nearly every facet of their operations.

Our definition of “construction tech” includes companies that are leveraging software or robotics to digitize, automate, or orchestrate construction processes.

despite deal Decline, funding bounces back

Global deal activity in the space grew from 2015 to hit 130 deals in 2018. Funding notably spiked that year when prefabricated construction and project management startup Katerra raised nearly $1B in its Series D round. 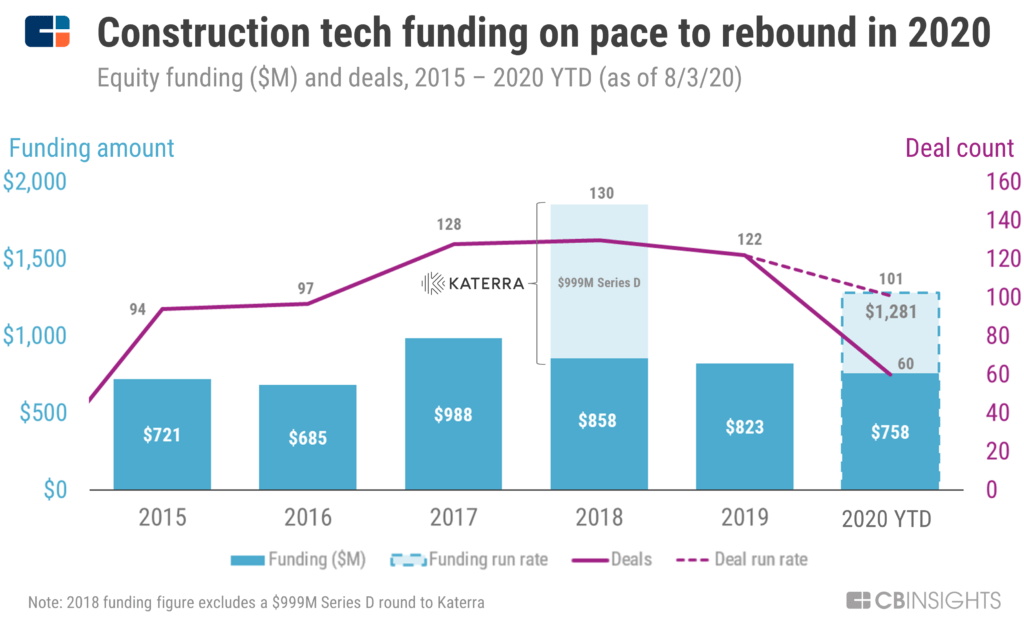 The uptick in funding has been driven by 2 mega-rounds (worth $100M+) this year:

Historically, construction tech startups have focused on developing Software-as-a-Service (SaaS) tools that digitize the project management, risk management, and procurement processes. But now, the space is seeing a greater emphasis on integrating AI, robotics, and other emerging technologies into the construction processes.

A number of startups developing these technologies have raised financing in 2020: