With its Series C financing, Clubhouse is now worth $4B and has catapulted social audio into one of tech’s hot new markets. Acquirers and investors are looking for ways to enter the social audio space. Here are the companies they should be looking at.

First, a little recap of how quickly the Clubhouse rocket ship has ascended:

When a company starts flying that quickly, it gets attention and also invites investors and companies, big and small, to join the fray.

For those of you looking to invest or acquire in the social audio space, we dug into the CB Insights platform to find 11 companies (mostly quite early-stage or even bootstrapped) that might be worth a look.

But first, let’s set the stage a bit. We’ll cover:

The birth of social audio as a technology market

Clubhouse has single-handedly birthed the “social audio” category. For 5 years, there was virtually no chatter about social audio, and then boom: as this news trend search on CB Insights reveals, social audio became a thing. 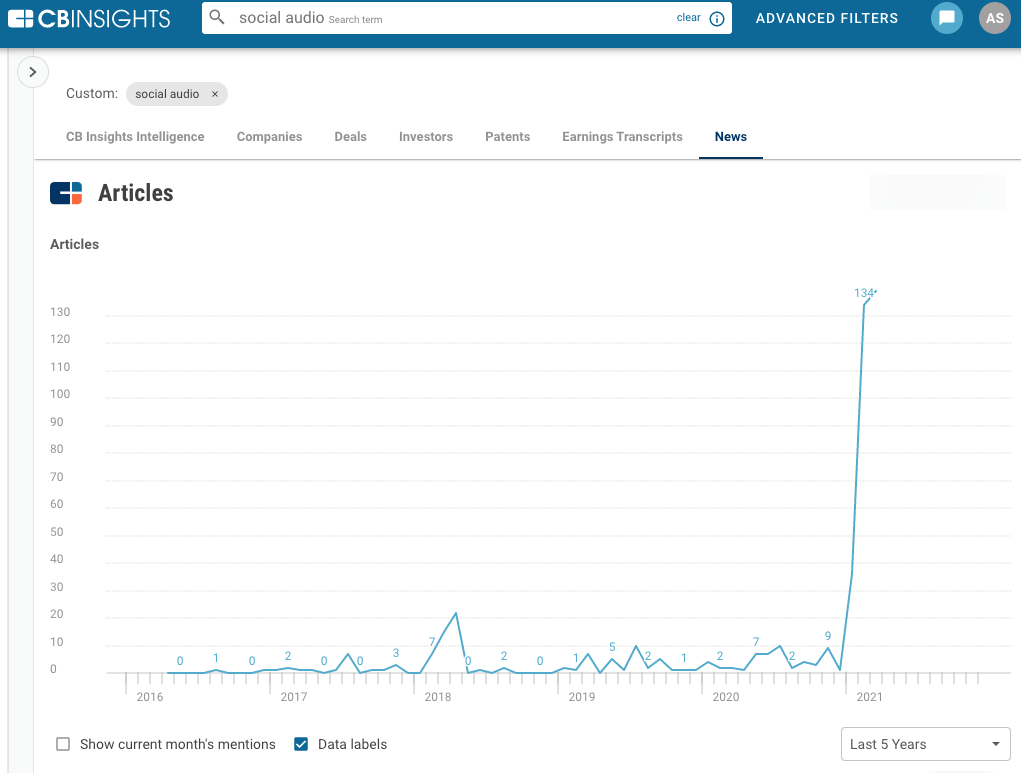 Why this crazy spike in news chatter?

Clubhouse has all the ingredients for a potent, buzz-generating cocktail.

Clubhouse financings & valuations are fast & furious — Clubhouse has top-tier backers in the likes of Andreessen Horowitz, Tiger Global, and DST. Just as buzzy has been its valuation climb and rapidity of financings, as you can see below from its profile on CB Insights.

Clubhouse user growth has soared — The platform had 2M users in January 2021 and grew to 10M by February 2021. And all this without an Android app.

It’s not derivative or niche — A lot of the innovation (or attempted innovation) in social has been incremental or niche. Think a social network for your 50 closest friends, or a vertical social network for like-minded people who care about a single topic (e.g., dogs, sneakers, mindfulness, fitness, etc.).

Clubhouse didn’t do either of those things.

Social needed a new entrant — It’s been a while since there has been a new social app that has captured the zeitgeist. Of course, it’s not all love, as the media often finds issues with Clubhouse. But at the end of the day, the media attention — good or bad — has helped Clubhouse get its name out there.

For years, enterprise, cloud, and SaaS companies have been the hot stuff, VCs have shied away from social, and seemingly nobody has been able to challenge the incumbent social networks of Facebook, Twitter, etc. Folks are interested to see a new kid on the block.

So with all that buzz and the threat of a new social network potentially putting incumbents at risk, various Clubhouse clones have been hinted at or launched.

Who is launching or has launched a Clubhouse clone?

There is a long list of tech companies that have either expressly indicated or hinted at their intentions to launch a Clubhouse-like product or feature.

Sidebar: We discussed how copying startups, which was once looked down upon, has become more common in a recent newsletter entitled “Great artists steal.”

11 Clubhouse alternatives investors and acquirers should look at

Buzz, big valuations, and a bunch of multi-billion dollar tech companies clamoring to get into social audio means the space will start to see a lot of investment and M&A in the coming months.

You can see all 11 companies on the Clubhouse profile here, each of which we break down below. As you can see, they are a global group, with headquarters in countries ranging from South Korea to the UAE to Switzerland, India and, of course, the US.

Below, we detail the following for each social audio company:

Founded in 2021 by Mark Cuban and Falon Fatemi, Fireside describes itself as a next-gen podcast platform that facilitates live audio between creators and their fans while also giving them the ability to record their conversations.