Big CPG companies need to step up M&A activity to stay relevant in the face of competition from smaller, younger brands.

The following is a guest post by Ryan Caldbeck (@CircleUp). Caldbeck is the CEO and cofounder of CircleUp, the platform providing capital and resources to innovative, early-stage consumer brands, and opportunities for sophisticated investors.

It’s no secret that the largest, oldest CPG brands haven’t innovated at the pace they should have. New CircleUp data released here illustrates how big brands have fallen behind. Pepsi soda, KitKat bars, and Clorox cleaner are decades, near-centuries old, and still have largely unchanged formulas. Just imagine if giants in other industries changed at a similarly slow rate—we might still be using clunky Newton computers and dial-up phones.

This is finally catching up to big CPGs brands, which now find themselves suddenly losing market share to fast-moving startups at an alarming rate. This is thanks to new market dynamics like cheaper marketing through online channels; sinking distribution costs through Amazon, startup-friendly retailers, and direct-to-consumer sales; and widespread consumer demand for more authentic, high-quality goods and services. Small brands are better set up to swiftly grow, and the Pepsis, Nestles and Cloroxes of the world are struggling to maintain their foothold. 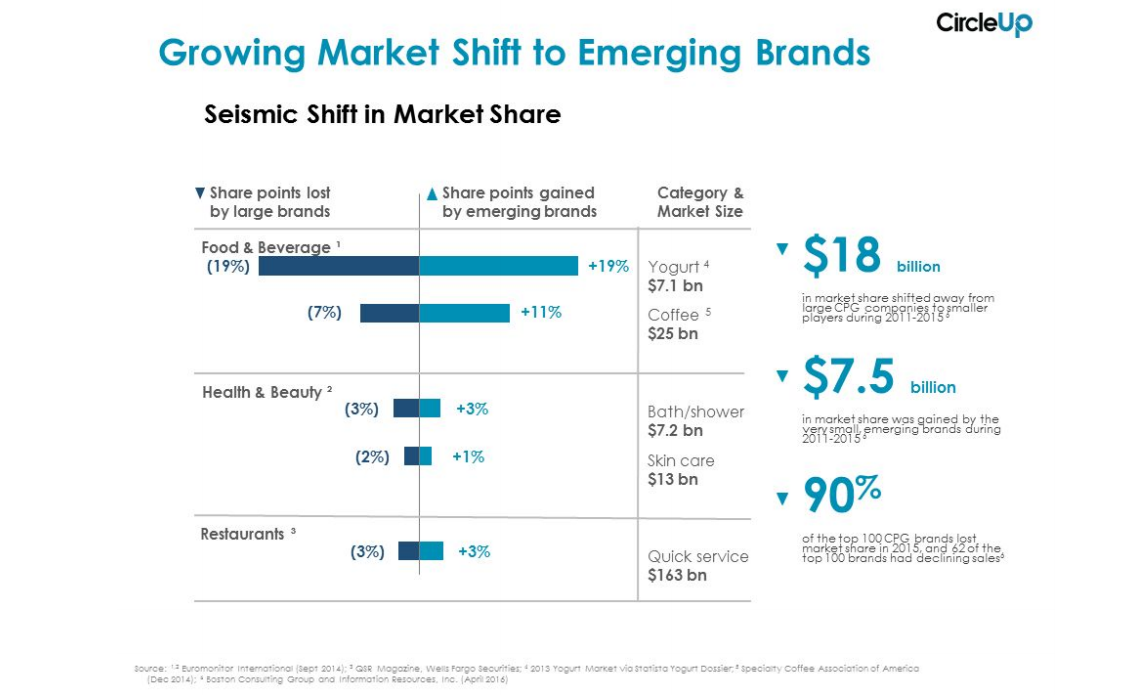 At the same time, the CPG private markets have been increasingly active. While the biggest public companies may be losing ground to smaller competitors, private CPG companies have raised over $8B from investors since 2012. 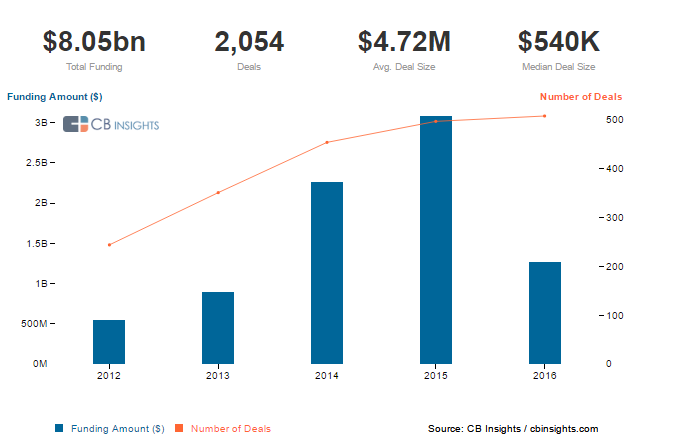 A Scramble For Shareholder Value

Cost cutting is a band-aid solution, providing temporary relief, but not addressing the root of the issue. It usually involves a merger between two big brands and consolidating operations. The problem is, after the consolidation is complete, the big (and now joined) businesses are still left with the same dilemma: people don’t want to buy what they’re selling.

The second strategy, product innovation, is smarter in intent, even if underwhelming in execution. CircleUp data shows the biggest CPGs invest an average of about 6x more in marketing and advertising than they do in R&D, with R&D accounting for a mere ~2% of revenue investments. In tech, where product innovation is front and center, the investment shares are nearly the opposite. 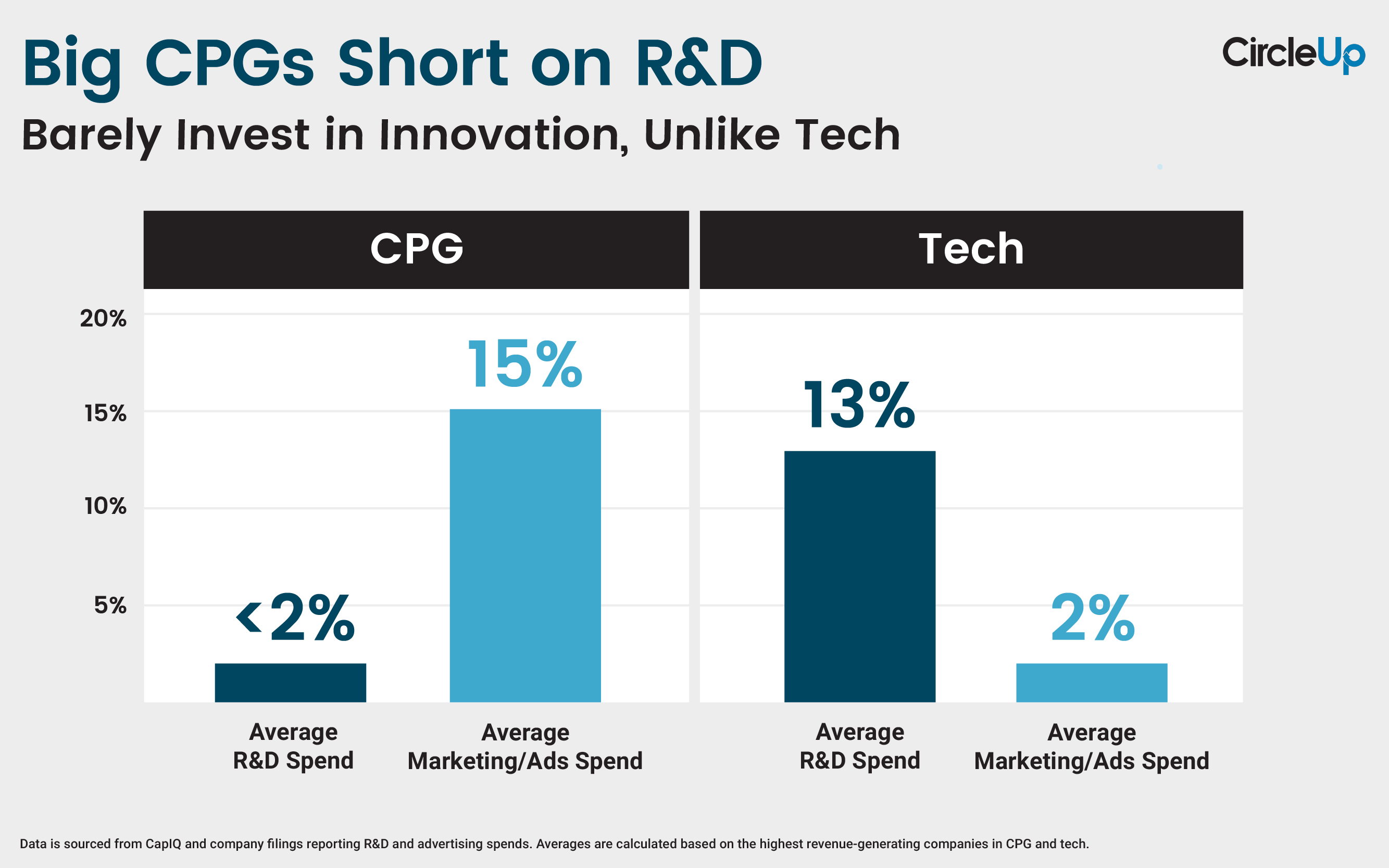 Since R&D has historically been an afterthought for big CPGs, it’s no surprise that even today, when facing severe external pressures, giant CPGs aren’t having the easiest time coming up with exciting new tricks. Innovation just isn’t in their DNA. In fact, new data from CircleUp and JooHo Yeo, Adam Ingber, and Jay Chia of the Cornell Venture Capital Club reveals a stark reality of what’s actually “new” in new product launches.

On average, among the biggest CPGs, only 39% of launches are actual new products. The other 61% of the time, the product launch is just an incremental change, such as new packaging, a new range extension, formulation or variety, or a relaunch. Indeed, a brighter orange color for the Frosted Flakes tiger, or the addition of a blue M&M in your candy, are likely to be the “new” products the biggest CPGs are launching. 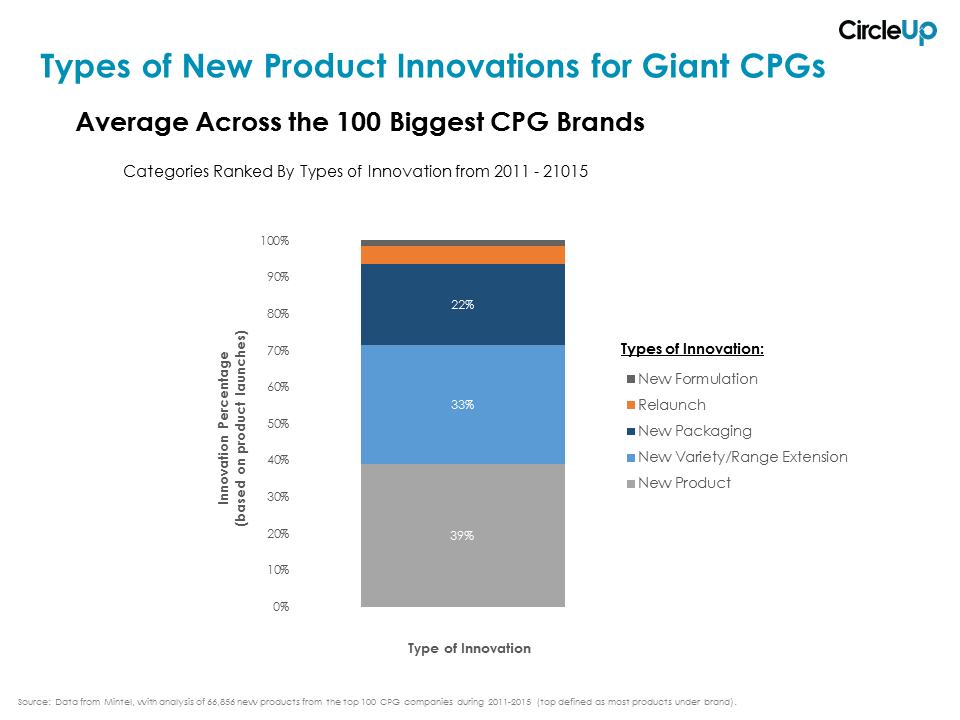 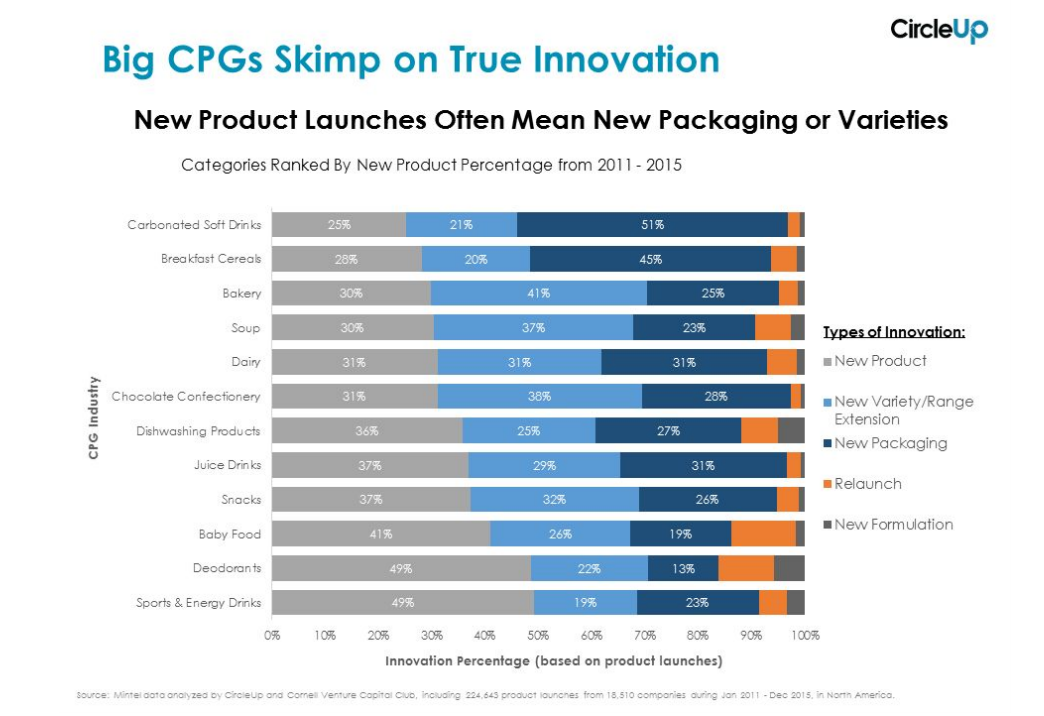 Get Ready for Consumer M&A

Where do big CPGs go from here? They know they need to be better, and to their credit, they are starting to take this seriously. We applaud Nestle for their recent sugar reformulation, and McDonald’s for their shift to cage-free eggs. But the widespread demand for authentic, high-quality products from small brands is too powerful for big CPGs’ rate of innovation to reverse their market share erosion.

That leaves a final, increasingly prevalent solution: M&A. Big CPGs are turning to small brands to bring in-house the innovation they’re failing to produce themselves, by buying brands once they’ve shown some traction and proven themselves in the market. Over the last few years, we’ve seen General Mills acquire the young meat bar brand in Texas, Pepsi acquire the natural Kombucha line Kevita, and Estee Lauder snatch up the millennial cult favorite Too Faced cosmetics. As PwC data shows, the volume of consumer and retail M&A has steadily grown over the past few years, with 2016 showing a sharp increase in small M&A deals, illustrated by a higher total number of deals done of lower dollar amounts. 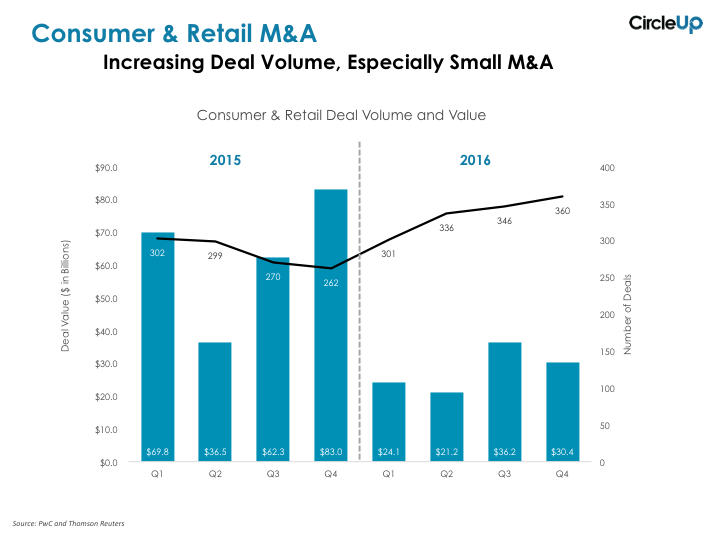 We expect the volume of small M&A deals in 2017, and throughout the following 5-10 years, to steadily climb. Big CPGs have no other choice.

In the consumer industry, the age old saying will be, “Those who can’t do, buy.” 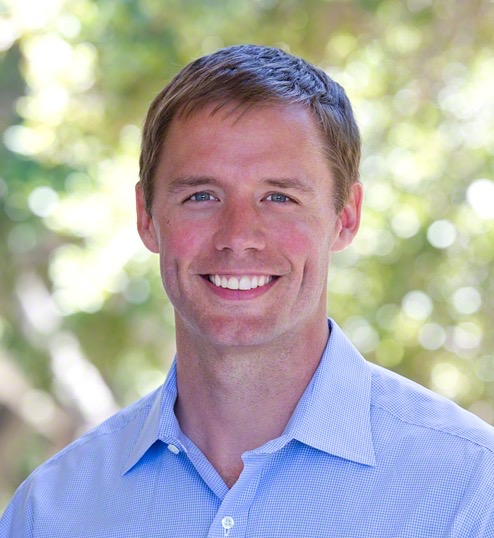 Ryan Caldbeck is the CEO and cofounder of CircleUp, the platform providing capital and resources to innovative, early-stage consumer brands, and opportunities for sophisticated investors. Prior to founding CircleUp, Ryan spent nearly seven years in consumer product and retail-focused private equity at TSG Consumer Partners and Encore Consumer Capital. Ryan has been recognized as a “Titan of Retail” by Bloomberg and “40 Under 40” by both M&A Advisors and the San Francisco Business Times.