Research Brief
2747
With Chinese corporates like Tencent and Alibaba on the hunt for US opportunities, 2015 saw more than 140 deals to US tech startups with Chinese investor participation. The pace has slowed this year, however.

US-based startups continue to attract foreign investment as international investors diversify their holding across geographies, and also as US startups themselves expand overseas into other markets.

In particular, China-based investors — many of them corporates — have participated in a growing number of deals into US tech companies, likely because they see opportunity to mine innovation in the US, or simply because Chinese investors have capital to deploy and the US offers a chance to place bets away from what has been a somewhat shaky home market.

We used CB Insights to look at the trend of deals into US companies that include Chinese investors.

Chinese-backed deals into US tech companies

When we look at the trend since 2010, the increase in investment from China-based investors becomes apparent between 2013 and 2014, when deals including Chinese investors more than doubled. 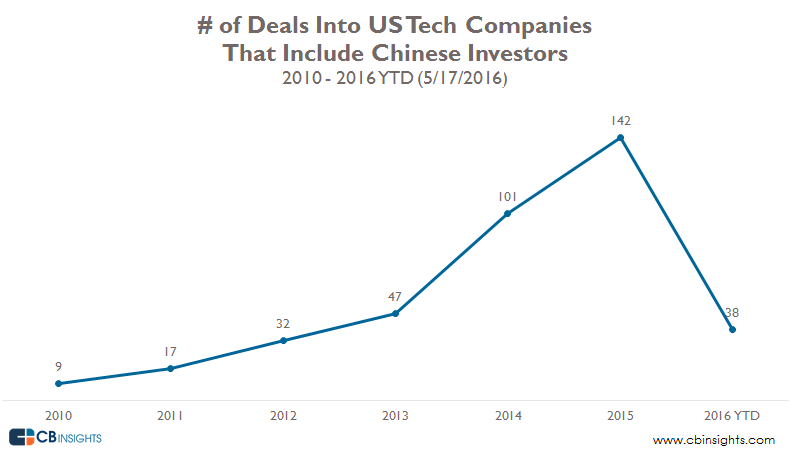 Chinese-backed deals to US tech by geography

California took by far the most deals with Chinese investors, with more than 280 deals into US tech companies since 2010. No other geography came close, with New York taking second place with less than 40 deals. Some non-major market startup deals that included Chinese investors include Kabbage (Atlanta, Georgia), FiscalNote (Washington DC), and TiKL (Provo, Utah). 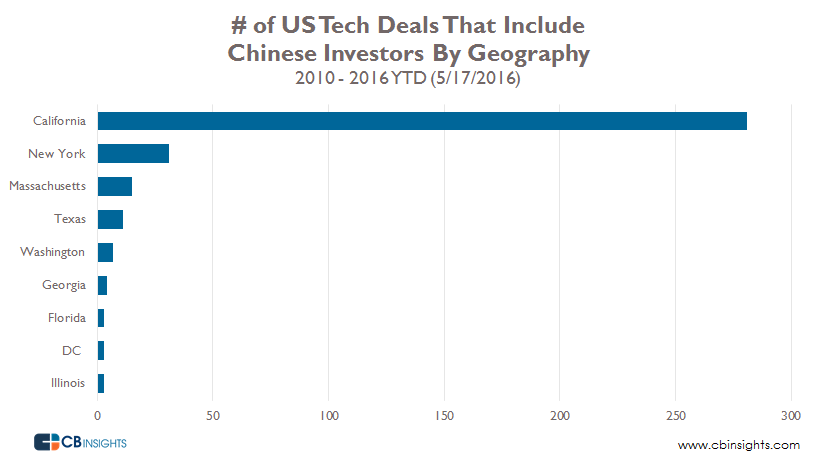 Most active Chinese investors into US tech

The most active Chinese investor into US tech companies is internet giant Tencent, with investments into more than 40 US-based tech companies since 2010, including unicorns like Lyft and Snapchat. Shenzhen-based hardware accelerator HAX took second place, putting more than 30 US-based companies through its program.

Other corporates like Alibaba and Renren also populated the list, with investments in Fanatics, Fundrise, and Yik Yak between them.

Want more information on Chinese investors? Check out our private market database or sign up below.