Research Brief
3634
A detailed look at the US startup investment trends of Baidu, Alibaba, Tencent, and JD.com.

After a wave of investments into prominent US-based companies ranging from Snap Inc. to Lyft to Jet.com, US-based financing deals by four of China’s largest internet giants are set to drop in 2016 at the current run rate, according to CB Insights data.

We used the CB insights database to analyze the US-based investments of Baidu, Alibaba & financial affiliate Ant Financial, Tencent, and JD (referred to hereafter as BATJ). In total, the four have participated in more than 90 deals totaling over $7.7B since the start of 2012. US-based deal activity and funding participation by BATJ hit all-time highs in 2015.

As the chart below highlights, the annual US-based deal total by the four rose nearly 5x between 2012 and 2015. 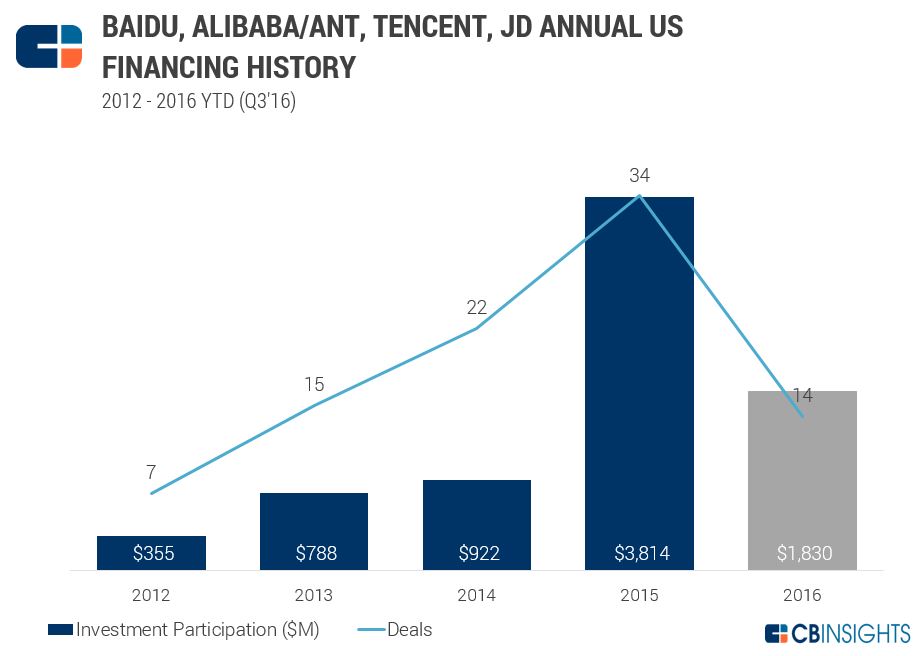 Breaking down the investment levels in the US by the individual Chinese internet giants, we see Tencent leading as the most active investor in each of the past four years. Tencent has also led the four by US investments made in 2016 YTD, though the WeChat developer has slowed its investment pace from its 2015 high.

Baidu and JD started investing in US-based companies later than Alibaba and Tencent and have completed fewer total deals over the period. Companies in their portfolios include Wish, CloudFlare, ZestFinance, and Circle Internet Financial. The pace may shift though and Baidu may become a more active investor, having recently announced a new $3B late-stage fund, Baidu Capital, and a $200M early-stage fund, Baidu Ventures, to invest in artificial intelligence and virtual reality companies. 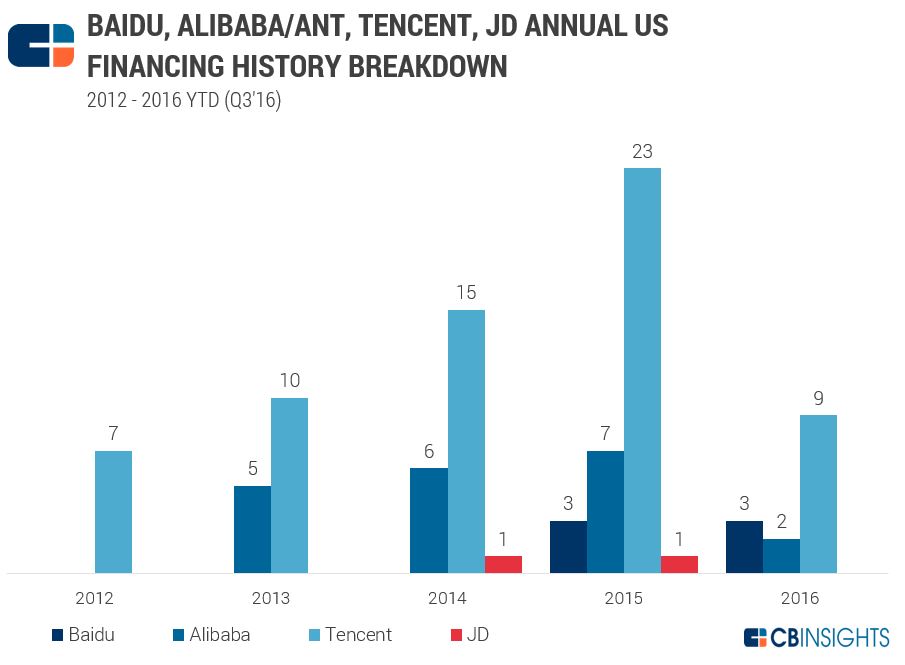 BATJ investments in the US diversifying geographically, but California dominates

Since 2012, California has made up 79% of the total US-based deals by BATJ though the four internet giants are increasingly looking beyond Silicon Valley as well.

Between 2012 and 2014, US investments by BATJ spanned just five states. Fast forward to Q3’16 and the four now count investments in 10 including Texas, Utah, and Florida where Alibaba invested in Magic Leap, Fanatics, and eApeiron. While not shown in the chart below, Ant Financial acquired biometric security tech firm EyeVerify, headquartered in Missouri, in September. 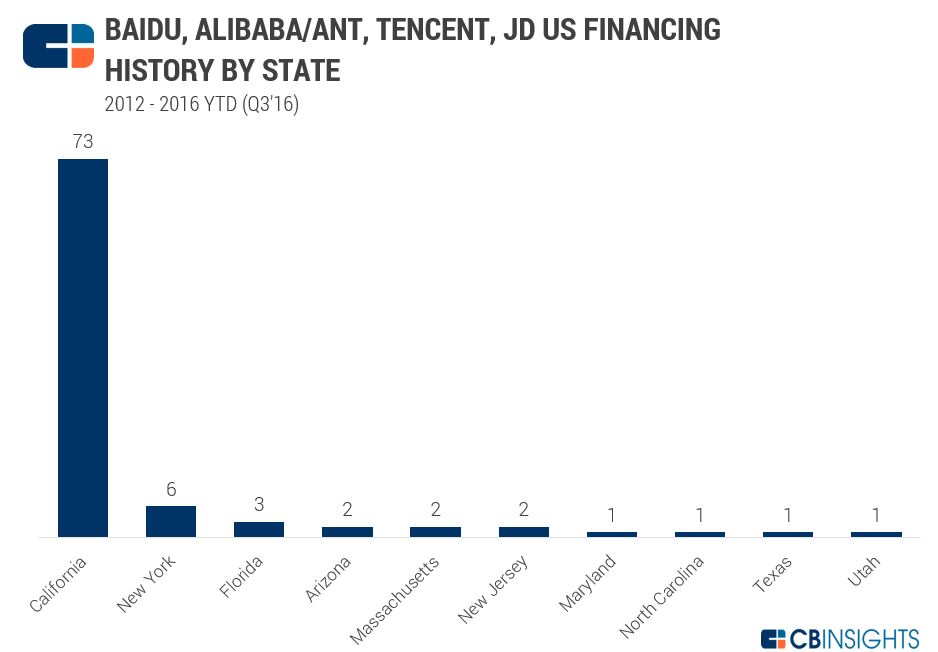 Minimal investment overlap among BATJ in US

Over the course of their investment histories in the US, there have been just three co-investments among Baidu, Alibaba, Tencent, and JD—Lyft, ZestFinance, and Snap Inc. ZestFinance partnered with JD to bring its data-driven underwriting service to China in June 2015 and then took an investment from Baidu in July 2016 to develop search-powered credit scoring in China. Lyft and Snap Inc. both count rivals Alibaba and Tencent on their term sheets.

The Business Social Graph below highlights Tencent’s prolific investment in the US since 2012, which include a number of gaming startups including Discord, Pocket Gems, and Playdots, and more recently, in health with deals since the start of 2015 including Scanadu, Circle Medical, and Clinicloud. 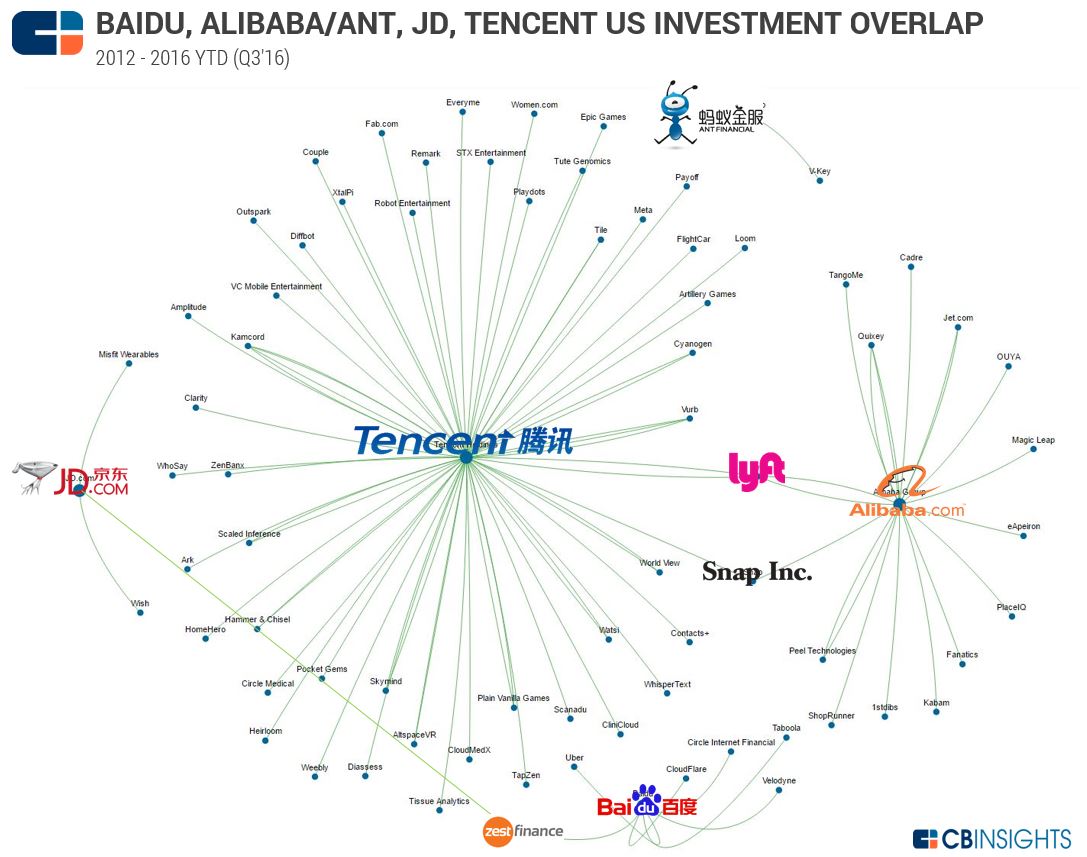