Does Softbank's recent push into India portend bigger things for the tech scene in the country? How does it stack up to China? We dig into the investment data.

Softbank is kicking off a $10 billion investment spree in India and recently disclosed mega-financings to both Snapdeal and ANI Technologies.  We’ve also seen $1B raised by Flipkart earlier this year. With all the attention India is getting from investors, is the technology balance of power shifting within Asia from China to India.

We used CB Insights data to see how China and India stack up and analyze these these markets and see where the deals and dollars are going.  Please note: This analysis covers through Q3’14 and so was completed prior to the disclosure of Softbank’s investments which occurred in Q4’14.

When comes to investment dollars, India has grown faster but off a much lower base. Propelled by the billion dollar Flipkart deal in 2014, India’s gap with China has lessened but still remains significant esp since a good portion of the funding was to one large atypical deal. In 2014, the funding gap was greatest in Q2’14 when investment in China more than tripled India. However, in Q3’14 YTD, the gap closed significantly and with Softbank’s recent deals, could Q4 be the quarter India overtakes China for tech investment? 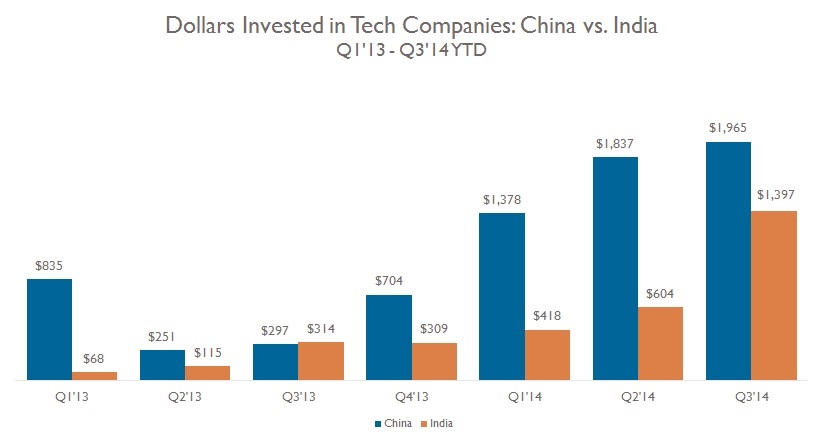 Number of Deals Made

Since Q2’13 China has consistently seen more deals in the tech sector than India. While both markets have been growing overall, China’s growth, while more erratic, has been greater. In just the last quarter, China saw 78% growth in deals. 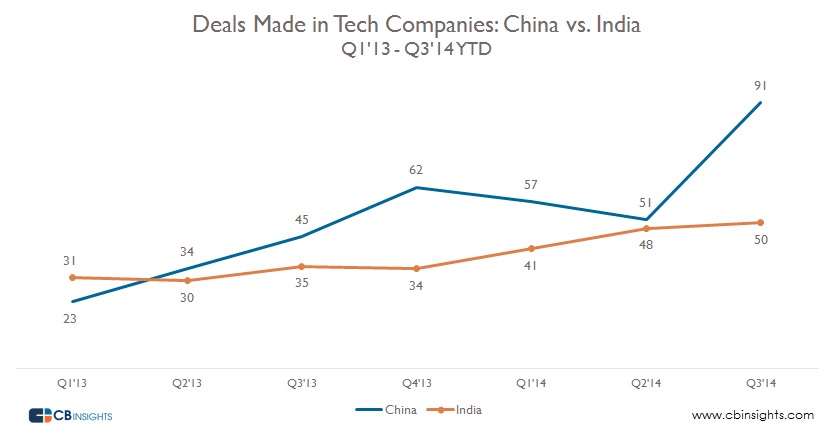 India dominates the Seed/Angel rounds, with 113 deals being made since Q1’13 compared to the 48 made in China. But otherwise, China largely dominates across the other rounds (Series A through mid-stage).  India has slightly more deals in Series E+ rounds, with notable deals including Myntra, Quikr, and Snapdeal. China maintains a comfortable lead in deals made in Series A, B, C, and D, having more than doubled the number of deals India has made in those same rounds.

While India’s very early stage activity is a good thing, there does appear to be a dearth of mid and later-stage investors. Typically, those investors have come from outside of India as well in the form of Softbank or Tiger Global. 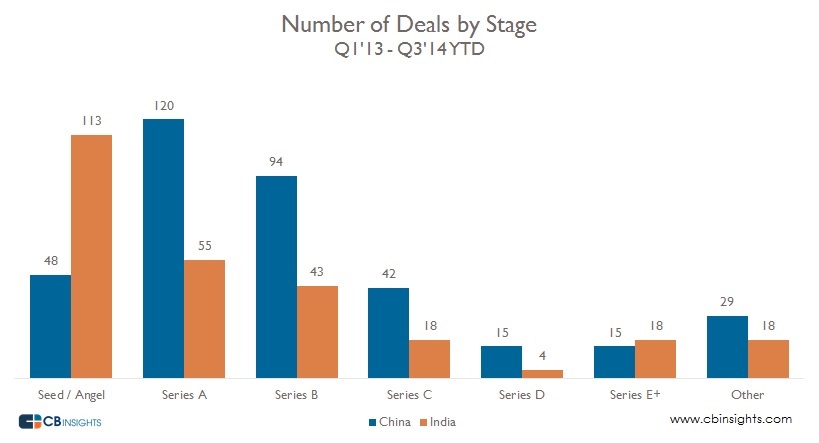 These startups raised the largest rounds since Q1’13 in each market:

Flipkart – Flipkart is a destination for online shopping in India. They raised a $1B round in a Series G financing from investors including Accel Partners, Tiger Global Management, and Digital Sky Technologies.

Snapdeal – Snapdeal is an India-based daily deal site featuring a wide range of products and services from thousands of national, international and regional brands. They raised a $133.7M Series D round with investors including Bessemer Venture Partners, Intel Capital, and eBay prior to their recent Softbank deal.

Meituan – Meituan is a China-based group discount platform. They recently raised a $300M Series C round with investors including General Atlantic, Sequoia Capital China, and the Alibaba Group.

Wandoujia – Wandoujia is a China-based Android app store that allows users to manage their personal data and digital contents from PC, mobile, and in the cloud. They recently raised a $120M Series B funding round which included Doll Capital Management, Goldman Sachs, and Softbank Corp.

To stalk private company financing and M&A deals within India and China, create a free account to the CB Insights venture capital database below.
*For the purposes of this data, Hong Kong was grouped with China. Data analyzed venture-capital backed tech companies and did not include debt or grant rounds.