Illinois is set to have a record year in deals and dollars invested, but where has the money been going, and who are investors involved?

After Groupon’s massive funding rounds starting in 2010 and subsequent IPO in 2011, the Illinois startup scene has been getting bigger.The majority of investments are concentrated in Chicago, where nearly $4.6B of investment has been made in 368 unique companies since 2009.

This analysis provides an in-depth look at the financing and exit landscape to tech companies in the Illinois region as well as the investors and companies fueling the startup ecosystem.

Chicago is the hub of VC funding in Illinois, and comprises of 59% of all deals and 61% of all dollars invested in the state. From 2009 the city has had a total of nearly $4.6B invested across 368 deals 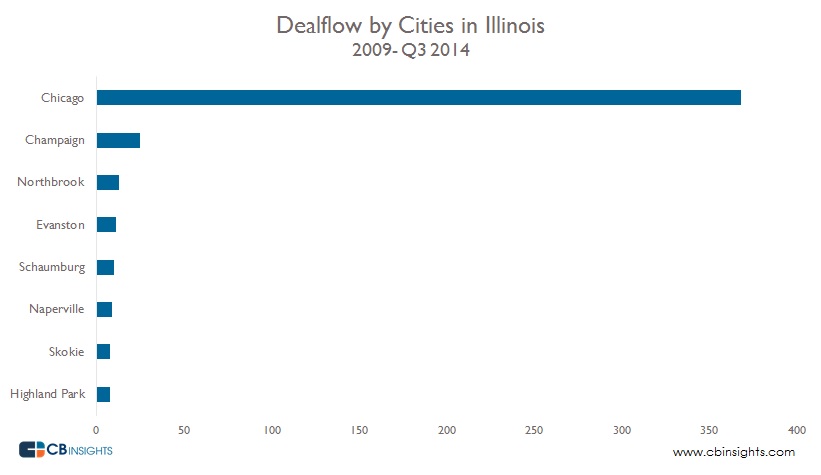 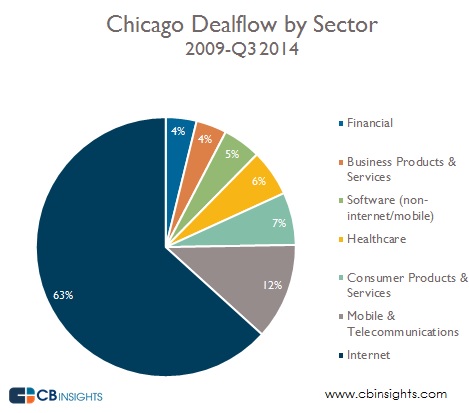 Funding in Illinois has had its good years and bad years. 2012 dropped by nearly 50% in funding after a high of $1.7B in 2011, but has since rebounded. While yearly funding has had ups and downs, dealflow has been consistently increasing since 2009. A record high of 247 deals were made in 2013, a 278% increase since 2009. 2014 is currently on track to having the most deals as well as the highest amount of funding if this trend continues. 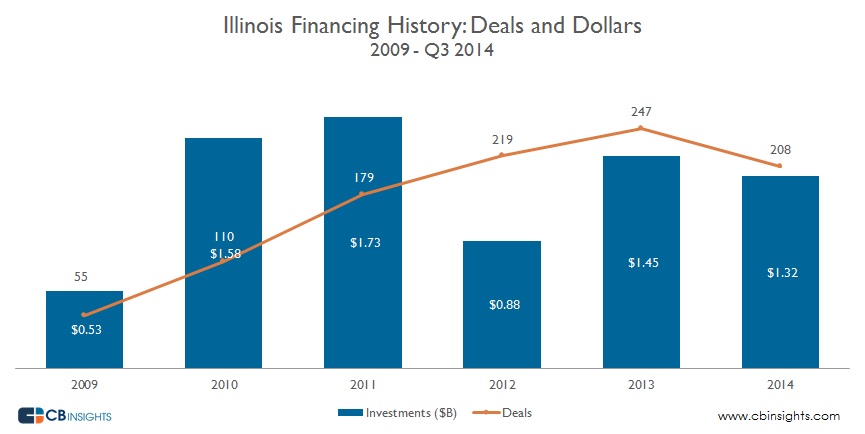 Looking at a quarterly trend, we see back-to-back strong funding quarters in Q4’10 and Q4’11 which were propelled by two massive funding rounds in Groupon for $500m and $450M respectively. Deals have experienced relatively consistent growth since Q4’11, with this past quarter reaching a record high of 74 deals including Tiger Global Management’s $75M Series C funding round in Chicago-based AvantCredit. 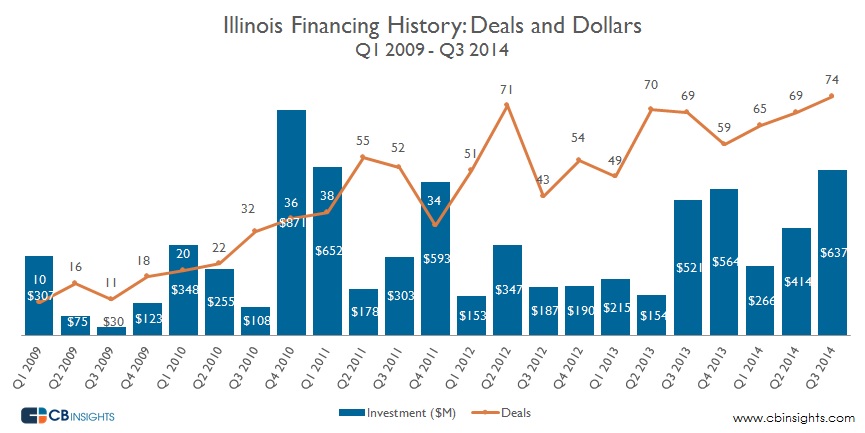 Though mid-stage has consistently received the most funding, year to year changes have been drastic typically being propelled by a handful of larger deals. 2010 and 2011 were dominated by Series D funding due mostly to funding Groupon, while 2013 saw nearly a third of dollars go to Series B financings led by a $45M funding round in SMS Assist. Series E+ funding, which was non-existent in 2013, took 1/5 of funding dollars in 2014 including a $36M round in Chromatin and a $30M round in Ifbyphone. Seed/Angel dollar share has slowly grown from 2% in 2010 to 10% in 2014, which included deals in I2R Holdings, GetSet Learning and G2 Crowd. Highlighting a nascent but growing early stage investment community in the Chicago area. 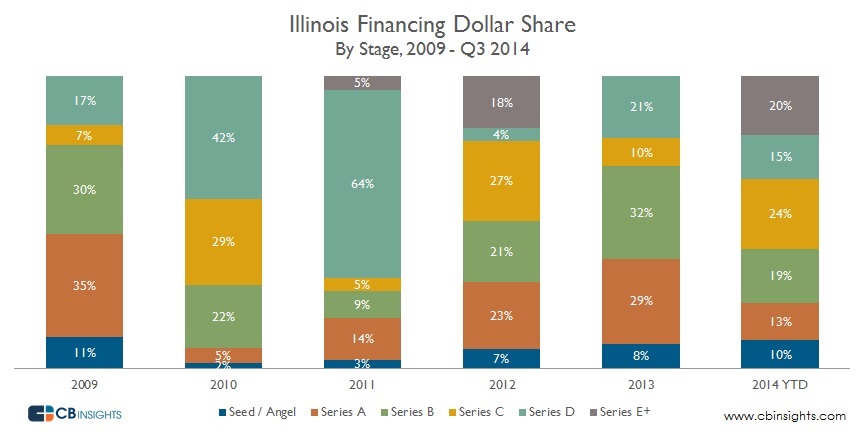 In terms of deal share, early-stage deals have consistently taken nearly 3/4 of total deal share each year. In 2014 so far, half of the deals have been Seed rounds, though Series E+ deal share has reached a 6 year high of 4%. Every other stage of investment has remained relatively range bound except for a spike in 2011 Series D deal share which included deals in Grubhub, PowerReviews, and SpringCM.

Looking at a sector breakdown of dollar share demonstrates just how dominant funding is in Internet companies. So far in 2014, more than 3 quarters of funding has gone into Internet companies, which was have seen more than $500M. 2014 has seen some growth in Software as well, reaching a six-year high of 10% dollar share which was led by a $30M investment in Ifbyphone that included Apex Venture Partners, Origin Ventures, and NewSpring Capital. 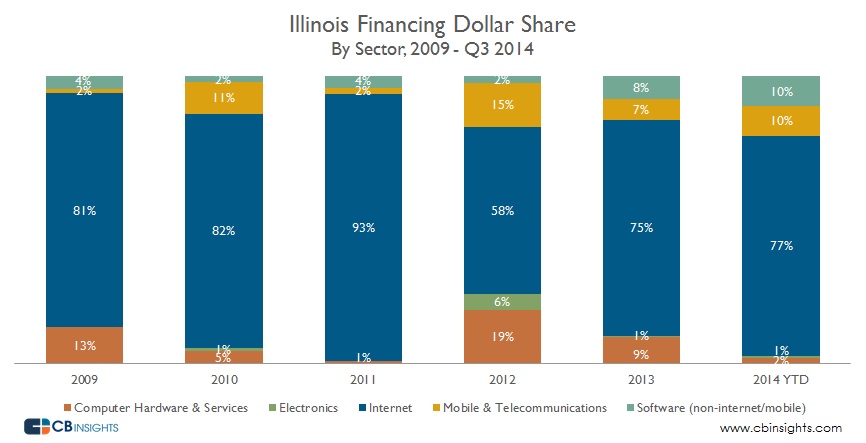 Since 2009 more than 420 deals have been made in the Internet sector, with 74 being made in 2014 so far. While 2014 has been one of the slower years for Internet deals, they still comprised nearly 2/3 of all deals. The Mobile scene in Illinois has also remained relatively popular, with nearly a fifth of all deals happening in this area. Healthcare software companies such as SA Ignite, Pharos Innovations, and Maestro Healthcare Technology have also been getting some traction. 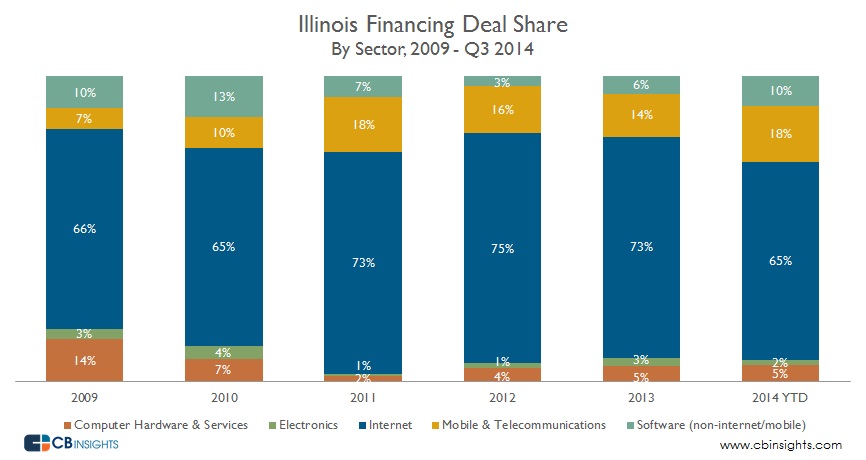 Cumulatively, the top 20 most well-funded private companies have raised nearly $4B in investment. Though Internet startups are 5 of the 20 companies, the list shows sector diversity including 3 Energy and Healthcare companies. AvantCredit and Invenergy top the list, with more than $500M total funding each.

Pritzker Group Venture Capital topped the list of active investors, with investments in more than 35 companies since 2009 focused on the tech sector. Some companies they’ve invested in include Cleversafe, Gogo (which had its IPO in 2013), and Sittercity. Lightbank and Chicago Ventures followed after, both having invested in more than 20 companies each.

With 7 investments, Pritzker was the most active mid-stage investor, making investments in SMS Assist, Sittercity, and Eved. They are followed closely by IllinoisVENTURE, New Enterprise Associates, and Hyde Park Angels.

Notable exits since 2011 include: 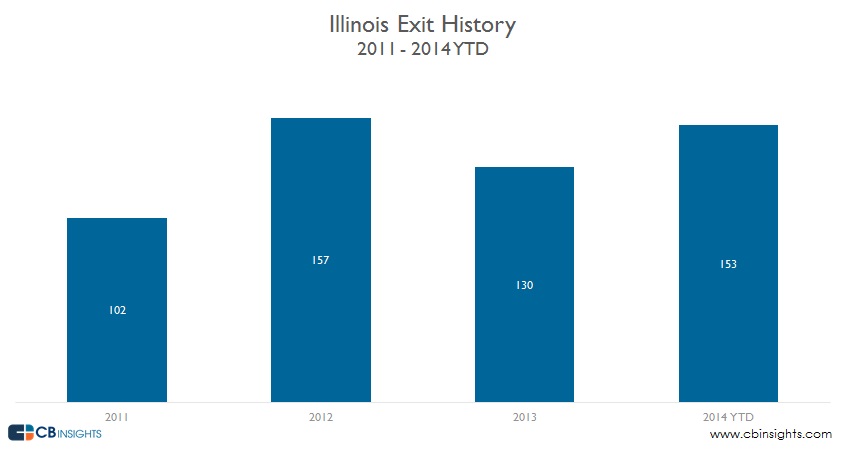 While M&A represents the majority of acquisitions, 2013 saw a high of 9 IPOs, which included Chicago-based companies like Potbelly and Levy Acquisition Corp. Wintrust Financial was the overall most acquisitive company, while Groupon was tech’s biggest acquirer. 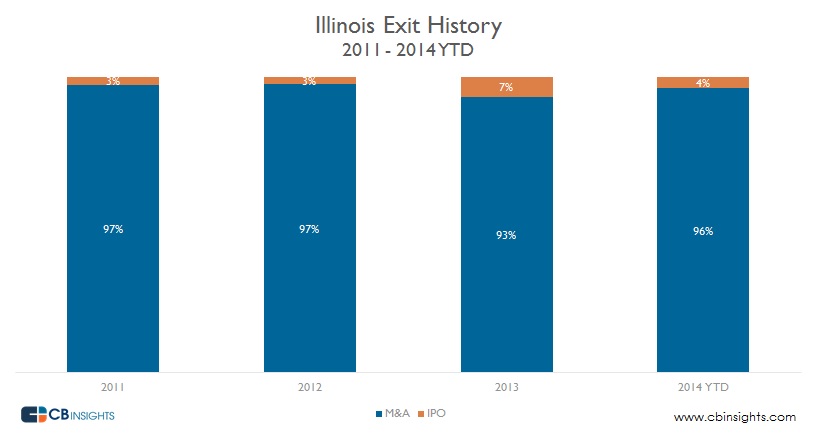 Lightbank and Pritzker, along with being the most active investors also have the most exits from their portfolios. Some of their acquired portfolio companies include Hyperquest, DraftDay, and Betterfly. Following closely behind are Hyde Park Angels and New Enterprise Associates, which each have 5 acquired companies.

All of the data underlying this analysis of Illinois is available as part of CB Insights private company database. Create a free account below.