Challenger banks. What are they? Who's who? And why have these startups raised hundreds of millions in venture capital to take on bank incumbents? We break down how these startups are reaching, converting, and engaging millions of customers.

Digital banking startups — or challenger banks — have gained traction over the past few years by bringing retail banking services mobile.

Europe has seen the first cohort of challenger banks (Atom Bank, Tandem Bank, Monzo, Starling Bank, Revolut, and N26) break out, collectively attracting $1B in funding and over 2.5M customers since 2014. 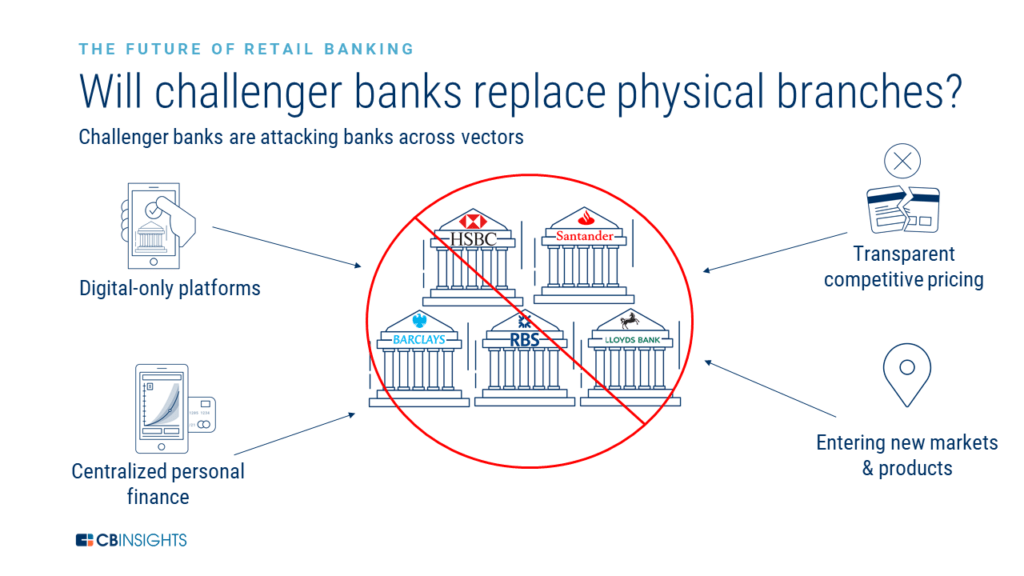 The UK, in particular, has seen the most challenger bank activity compared to other regions, as a result of progressive regulations enacted to promote competition and break up the banking monopoly.

In this brief, we explain what challenger banks are, dive into the playbooks of notable challenger banks, assess how different regulatory approaches have impacted growth, and highlight trends to watch through 2018.

In this brief we’ll cover:

What are challenger banks?

Challenger banks have targeted underserved and unserved demographics, like consumers in lower income bracket. They have also grown on the backs of improved user experience, appealing to those who want to be able to bank from their phones instead of visiting a retail location.

Now, as the most successful challenger banks look to scale, they are launching new products via API integrations with other fintechs and expanding into new markets.

How challenger banks have leveraged regulation

Over the past few years, the EU’s progressive regulators have made it easier for leading challenger banks Atom Bank, Tandem Bank, Monzo, Starling Bank, Revolut (all UK based), and N26 (based in Germany) to obtain the financial license necessary to operate.

In the case of Atom Bank, Tandem Bank, Monzo, Starling Bank, and N26 they obtained a full bank charter, which takes up to 2 years, but widens the services these banks can offer consumers. In pursuing this time-intesive process, these challengers bet that a charter would build trust with consumers and allow them greater flexibility in building their offerings.

Revolut’s strategy on the other hand has been to get an e-money license  which can be obtained much more quickly, though the scope of services that can be offered is more limited.

Challenger banks have also been able to expand within the EU by leveraging the European Economic Area (EEA) “passport.”  The passport enables a firm licensed in 1 of the 27 EU member states to provide financial products or services in another country without needing further authorization in each country. N26 has already leveraged a passport to expand its service to 17 other EEA countries.

Below we look at the license challenger banks obtained, the first product they launched, as well as select funding and investor data.

Traditional approach: Atom Bank, Tandem Bank, and Starling Bank prioritized having a bank charter prior to launch and built a suite of services that required a charter, believing it would create a moat around the platform. Atom Bank, for example, launched a savings account and SMB lending after regulatory approval. They also plan to launch current accounts but that roll out has so far been delayed.

The biggest drawback to this approach has been missing the first wave of early adoption. Despite having added regulatory protection and wider approval to launch products, they were behind on getting a product to market and didn’t launch until mid-2016, 18 months after registering with the Financial Conduct Authority (FCA).

Another drawback to the charter is that it can be revoked. Tandem lost its banking charter after failing to secure funding. It acquired Harrod’s bank division in December as a way to restore its charter, but that was a costly and time-intensive process.

Semi-traditional bank: Monzo and Germany-based N26 wanted to get customers onto the platform. To do so, Monzo launched a prepaid card instead of a full account product.

The benefits of this strategy include getting products to market faster, getting customer feedback, and fixing bugs during early product releases. But a drawback to this strategy is that it could potentially jeopardize growth.

Monzo was going through a period of rapid growth, adding a reported 60K users a month when the company was granted a charter. In December 2017, they stopped adding new customers and announced plans to focus on transitioning the 500K existing customers off of prepaid cards and onto Monzo’s own current accounts.

As of February 2018, the company has a waitlist for new current account registrations, which means it’s missing out on roughly 180K potential new customers (at the peak growth rate of 60K per month) as it focuses on transitioning its existing customers off of the prepaid cards.

Another drawback is having to partner with other corporates in the interim while waiting on a bank charter. N26, for example, partnered with Wirecard, and had to give them a cut from every transaction.

Revolut leveraged the EEA passport to expand across Europe and partnered with other fintechs to iterate quickly. It was able to launch this product without waiting on a charter, while quickly gaining access to a roster of potential clients for a broader eventual banking offering.

The most viral product Revolut has launched to-date is a cryptocurrency exchange. Following the announcement in November 2017, the company crossed 1 million users and was adding 3,500 users per day. As of February 2018, Revolut reports it has 1.5M customer. It is the first challenger bank to announce breaking even on a monthly basis. This means that the company is monetizing enough customers to offset the cost of acquiring new ones.

The fastest-growing challenger banks — Revolut, Monzo, and N26 —  have acquired 2.5M customers through viral growth strategies and without a bank charter.

The other 3 companies — Tandem, Starling, and Atom — waited to launch products until receiving their charters, which took 2 years. To date, they collectively have only 52,000 customers.

Interestingly, in 2016, Atom and Tandem, 2 of the challenger banks pursuing a bank charter, burned more cash than Revolut, which was able to acquire customers faster. 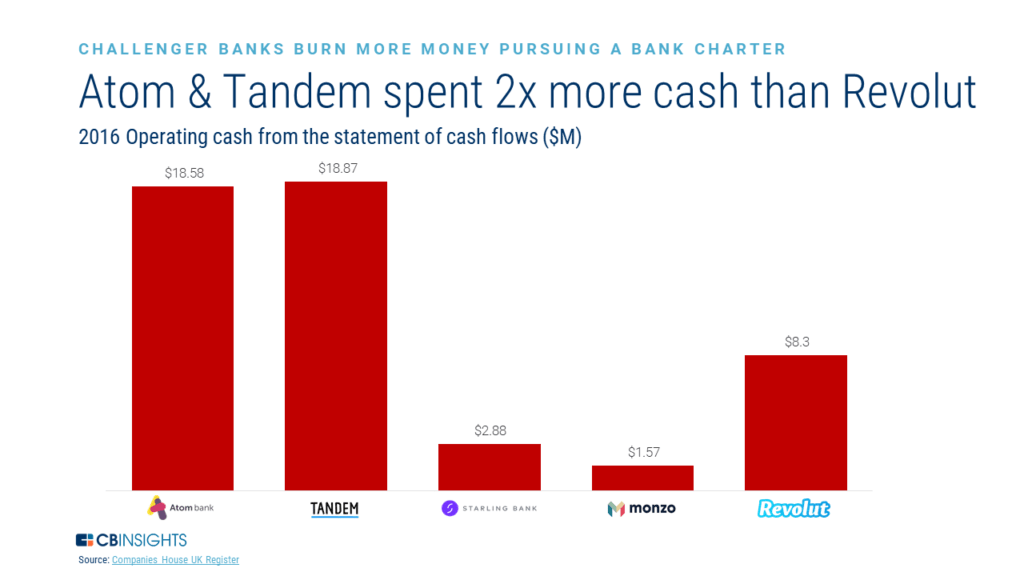 Revolut has grown its customer base much faster than the challenger banks pursuing a bank license by focusing resources on rapidly launching products and bringing customers on board quickly. 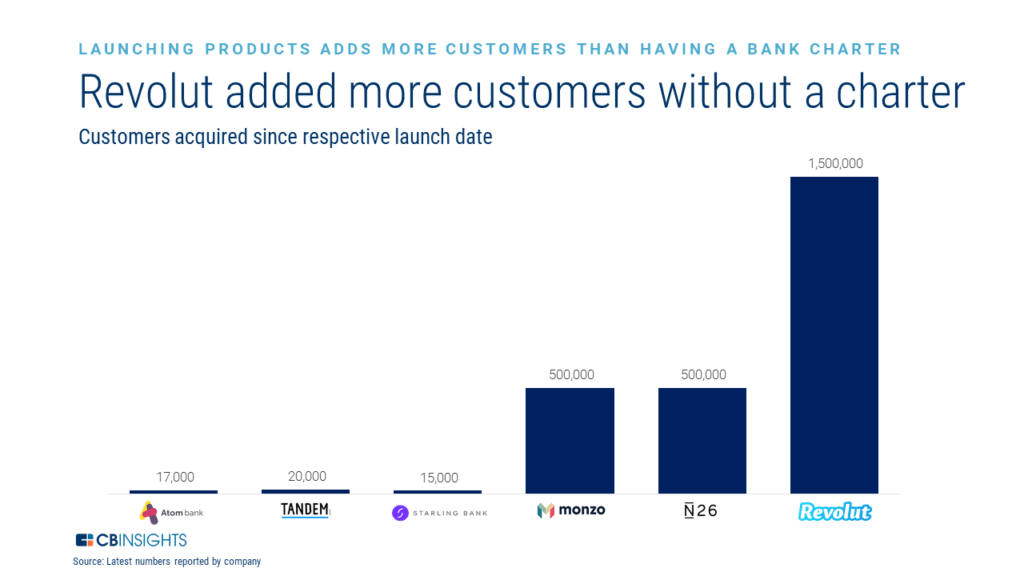 In 2011, customers still relied heavily on branches and were just starting to embrace internet banking. But challenger banks bet that mobile would be the next platform for retail banking distribution. That has proven prescient. As of 2016, mobile interactions have quickly grown to account for 56% of customer’s banking engagements in Europe. 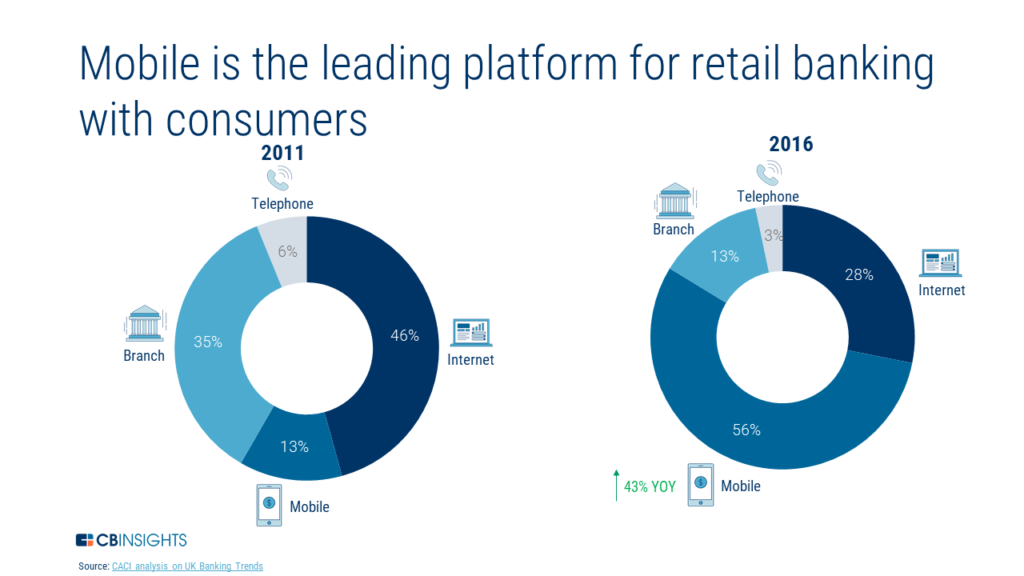 Challenger banks continue to benefit from the transition to mobile, as incumbents maintain a branch-centric business model. In the last 2 years, banks have shed approximately 1,000 branches across Europe, but it seems as if this still isn’t enough. Branch operating costs (OPEX) now exceed the revenue they generate.

Regulators in the EU are still very active in enabling challenger banks by implementing rules that give challenger banks room to grow. This includes regulations like the UK’s open banking standards and the EU’s Revised Payments Services Directive (PSD2), which both went live with phased rollouts in January 2018.

Open banking and PSD2 standards allow third parties to safely and securely access customers’ current account data at their request. This means there’s a big opportunity for more fintechs to plug into traditional banks and build new services for consumers.

Challenger banks are focused on rebundling retail banking services in 2018 and creating one platform for underbanked customers.

Firms that partnered with other fintechs like Revolut and N26 have been quick to add new services, which has helped them drive down costs and begin breaking even.

Following this, other challenger banks may ramp up partnerships, especially now that the UK’s open banking standards and the EU’s PSD2 are live. Starling Bank is already taking advantage of the new standards and is aggressively pursuing partnerships with other fintechs. In 2018, the company launched an API marketplace and is aiming to integrate with 25 fintech startups.

Moneybox, for example, was one of Starling Bank’s earliest partnerships. Moneybox is a digital wealth management startup that makes fractional investments for customers with spare change that is siphoned off of every purchase and automatically invested in a savings account. Moneybox leveraged Starling’s API to improve the investment allocation time from once a week to real-time.

One drawback to this partnership approach however is it’s easy to replicate. In fact, Moneybox is also planning to partner with Monzo and has an existing partnership with Revolut. Other challenger banks like Atom Bank and Tandem will also likely increase partnerships to achieve cheaper customer acquisition, increase speed to market with new services, and contain upfront infrastructure costs. 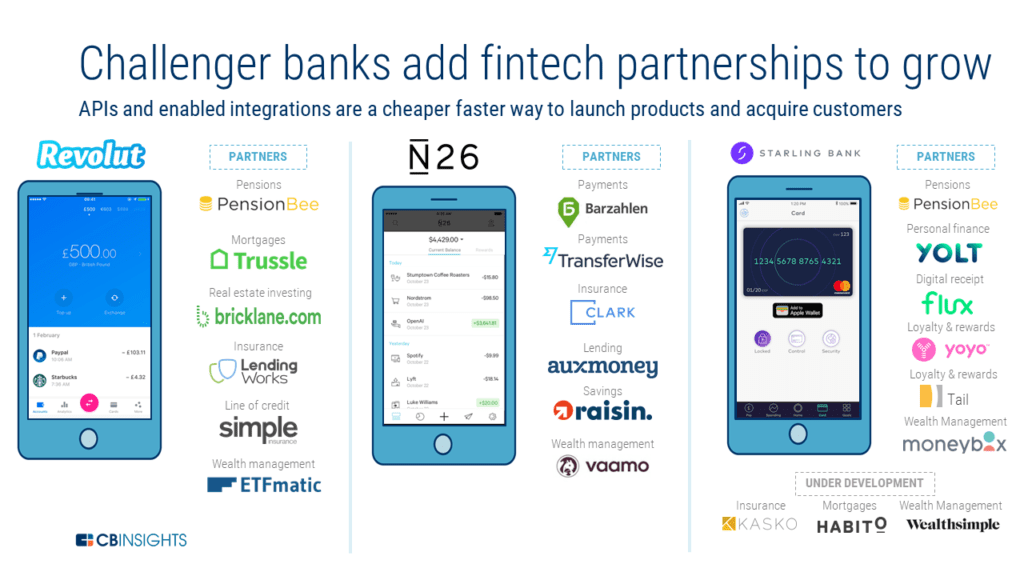 Challenger banks may also look to partner with bulge bracket banks they set out to disrupt in order to take advantage of new open banking requirements, facilitate network speed, and ensure information security. Tandem and Atom Bank may look for larger institutional partners as they launch more products like alternative credit cards and alternative mortgages respectively.

Beyond Revolut’s 2018 roadmap, if the company gets approved for a charter, it will be interesting to see which new products and markets the company prioritizes. The conventional approach would be to launch a fully licensed current account product in the UK or in a passport country that has less competition from chartered challenger banks.

But challenger banks are innovating quickly and may pursue other opportunities first. Revolut already established an investing arm (Revolut Wealth) licensed to support pensions, ETFs, and mortgages. Stock trading is also a logical next product and follows the company’s trailblazing mentality.

In addition to adding products, challenger banks looking to grow are betting on new markets beyond the EEA member states. N26, Monzo, and Revolut are all hiring in the US but face significantly higher barriers to entry and competition. The US regulatory landscape is fractured across state lines and the US Office of the Comptroller of the  Currency (OCC’s) fintech charter has been tabled.

Challenger banks that do try to expand in the US face potential competition from existing fintechs like Square, which applied for an industrial charter in 2017 and launched direct deposits in March 2018, and European unicorns Klarna and TransferWise, which are both operational in the US, have EU bank charters, and have announced plans of launching a current account product in Europe.

While neither Klarna nor Transferwise have said that they are going after the challenger bank market, both have considerable financial resources and established distribution that make them viable competitors. 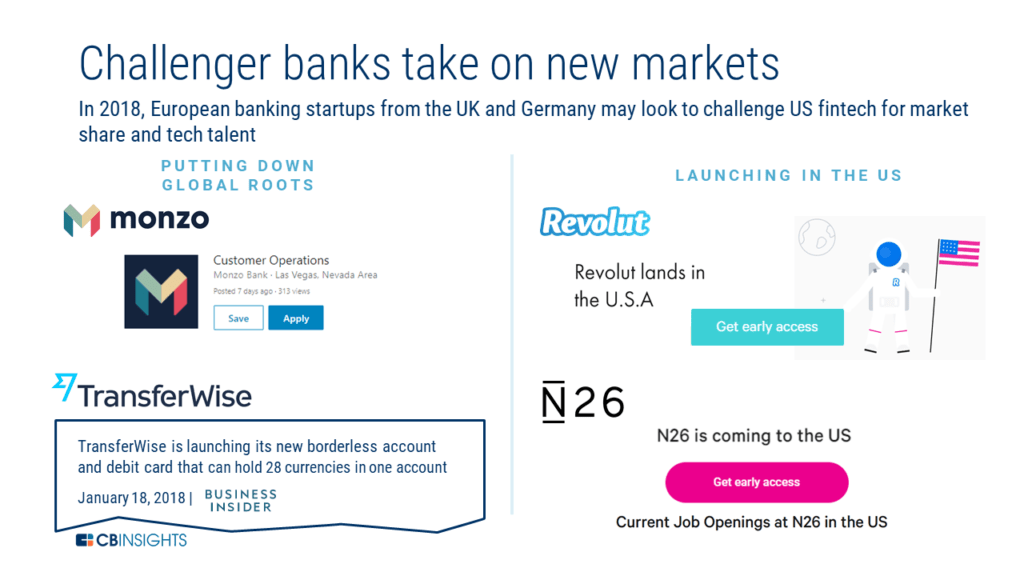 As these fintechs expand their reach, it’s evident that no product or market is off the table for challenger banks.