Research Brief
2219
On the two-year anniversary of Aileen Lee's famous unicorns post that coined the term for $1B startups, we crunch the numbers to see how much we've written about unicorns and list all our unicorn posts.

Two years ago, on November 2, 2013, Aileen Lee published her now-famous post about private company unicorns titled “Welcome to the Unicorn Club,” coining the term that would stick for referring to $1B+ valuation startups. A lot has changed since, and we’ve written quite a lot about the supposedly rare beasts along the way, not to mention launching a real-time unicorn tracker to list all the current unicorns, predicting 50 future unicorns with The New York Times, and hosting a tournament of startup unicorns.

To mark the two-year anniversary, we collected a few data points from the CB Insights unicorn archives:

The full trend in unicorn posts, below. 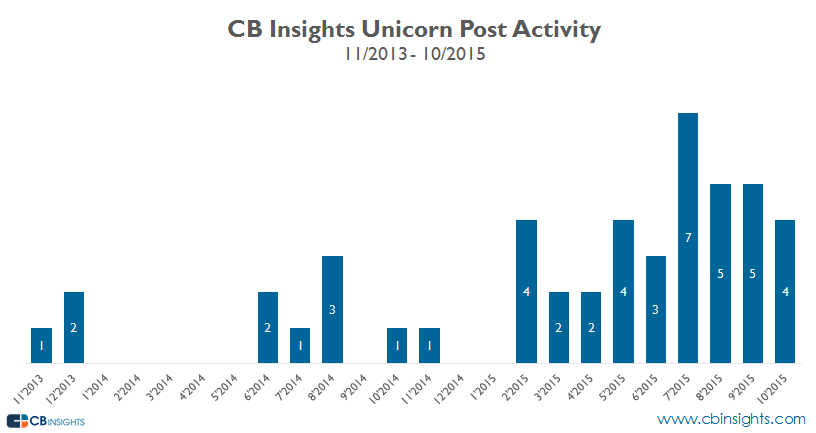 Below, in reverse chronological order, is the bulk of our research on unicorns since November 2013.

The Increasingly Crowded Unicorn Club In One Infographic – 10/26/2015

Wounded Unicorn: Sentiment Analysis Highlights How Badly Theranos Has Been Destroyed In The Press – 10/16/2015

How Would Kleiner Perkins’ Internet Leaderboard Look With Unicorns Included? – 10/13/2015

Among Corporate VCs, Salesforce Ventures Counts The Most Unicorns – 7/22/2015

Which Venture Capital Firms are Best at Spotting Unicorns Early? – 3/2/2015

Want more Unicorn data? Login to CB Insights or sign up for free below.