Carbon nanomaterials could replace silicon in computer chips and transform multiple other industries — so why are they held up in the pre-commercialization phase?

Breakthroughs in carbon nanomaterials — substances made up of single units sized between 1 to 100 nanometers — in the last two decades have opened up vast possibilities, from nano-computing to smart medical implants. Because of their unique strength and conductivity, carbon nanomaterials have the potential to replace silicon in computer chips.

However, commercializing new materials is notoriously difficult. Taking lab results to mass production is a long and risky process similar to bringing a new drug to market. Technical hurdles and the high costs of lab time and production cause many “game-changing” materials to fail early on.

This is the first in a series of posts on cutting-edge materials currently in development in startups, R&D departments, and university labs. In the series, we will look at the technical and market obstacles in commercializing advanced materials, starting with graphene and carbon nanotubes.

Because of their small unit size, nanomaterials have properties that conventional bulk materials cannot match, including high strength-to-weight ratios (i.e. they are strong, but lightweight) and superior electrical connectivity.

Carbon-based nanomaterials — particularly graphene and carbon nanotubes — have shown enormous potential as substitutes for materials in a variety of industries. 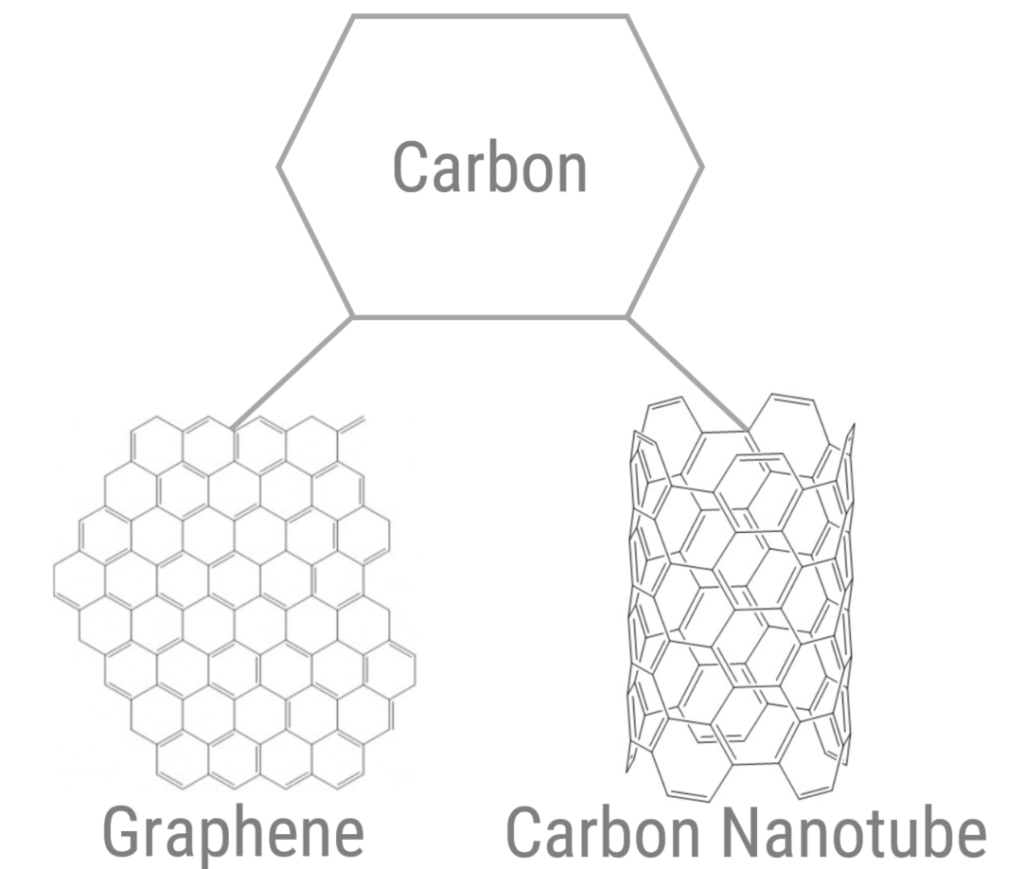 CNTs were first discovered in the early 1990s, but graphene wasn’t isolated until 2004 by scientists at the University of Manchester.

Graphene and CNTs have seen different development paths over the years, though they have similar properties and applications.

Graphene is the strongest material ever measured. It has a superior strength-to-weight ratio, conducts electricity approaching the performance of a superconductor, and is nearly transparent. From aerospace to semiconductors to sports equipment, industries are investigating ways to use graphene to improve performance. 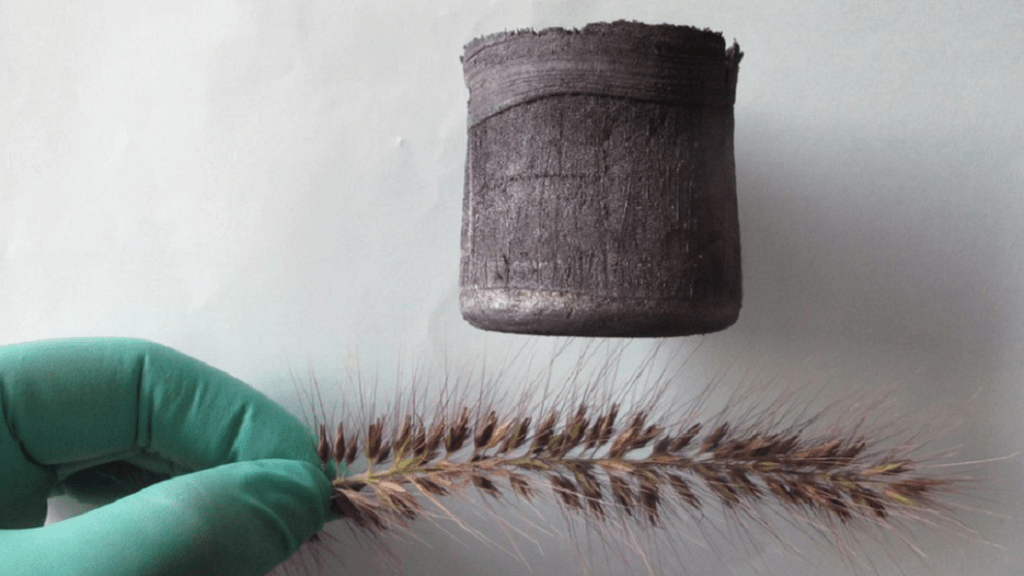 Graphene aerogel, one of the world’s lightest materials

CNT research has been more focused, driven by the semiconductor industry. IBM in particular has devoted considerable resources to developing CNTs for use in computer chips.

VCs haven’t ignored carbon nanomaterials — funding to graphene-focused startups steadily increased from 2007 to 2015. However, deals and funding dropped in 2016 and haven’t quite recovered.

The drop reflects a loss of traction typical in advanced materials development, where technology gets bogged down between breakthrough and commercialization. 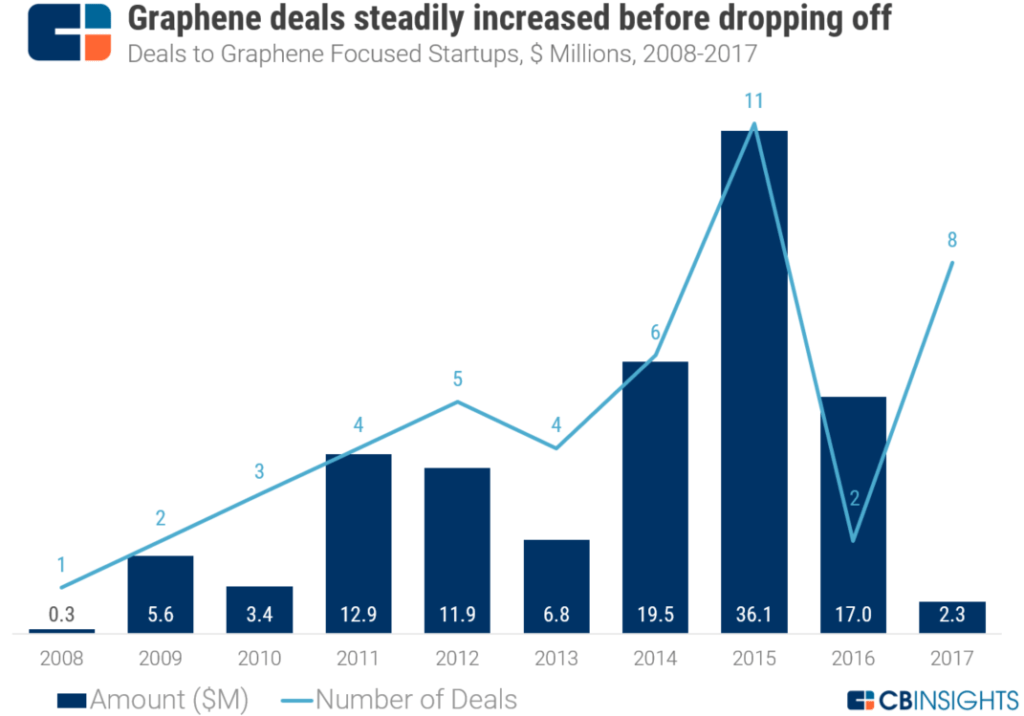 Startups in this space are either working to develop specific graphene-enabled products — such as batteries, medical devices, and electronics — or are finding ways to efficiently produce the material for general use.

For example, Vorbeck Materials is developing graphene-based inks and coatings for the printed electronics market. The company’s graphene products can be used in wearable electronics, RFIDs (radio-frequency identification), sensors, and other applications.

On the production side, XG Sciences, which has raised funding from Dow Venture Capital and Samsung Ventures, manufactures and sells graphene materials. The company’s proprietary process makes short stacks of graphene sheets known as “nanoplatelets” for use as an additive in a variety of applications.

Startups are also developing CNT technology, though fewer companies have entered this space.

CNT-focused startups also saw a drop in funding after 2015, likely for the same reasons that graphene funding plummeted. CNTs have hit technical hurdles after years of R&D investment. Two decades after the initial breakthrough, they still haven’t been widely adopted.

Nantero believes that CNT technology can be used to make chips with much denser circuits than conventional semiconductor materials, drastically increasing speed and memory.

Nantero has licensed its technology to Fujitsu, taking a step towards commercialization. However, there are still technical and market hurdles that have to be overcome before CNTs can be widely used in computing.

Corporates focus on internal R&D rather than startup investment

All of the major semiconductor companies are looking at graphene for use in chips and batteries. Samsung, the largest semiconductor fabricator by volume, has over 200 graphene-related patents, per our patents search engine. In late 2017, the company announced its development of a graphene-enabled battery material with a charging speed 5x faster than conventional batteries.

CNTs have received significant R&D investment by the semiconductor industry and large technology companies. IBM owns over 200 patents related to CNTs, and has invested heavily to develop the material.

In aerospace, graphene has shown excellent results as an additive in composite materials such as carbon fiber. A 2010 study by Rensselaer Polytechnic Institute found that graphene outperforms CNTs in making composites stronger, stiffer, and less defect-prone.

Airbus has invested in graphene research, and has 6 graphene-related patents.

Graphene and CNTs demonstrate the difficulty of transferring unique material properties from the lab to mass production.

Graphene, for example, conducts electricity better than silicon or copper. Combined with its strength, weight, and transparency, graphene’s conductivity gives it the potential to displace silicon-based computer chips and improve everyday electronics.

There’s a catch, though — graphene is a “gapless” semiconductor, meaning that the flow of electrons through the material cannot be stopped. Computer chip makers have to introduce “band gaps” to silicon chips, which allow users to turn off devices by stopping the flow of electrons. The difficulty of this process is a critical obstacle to commercialization. 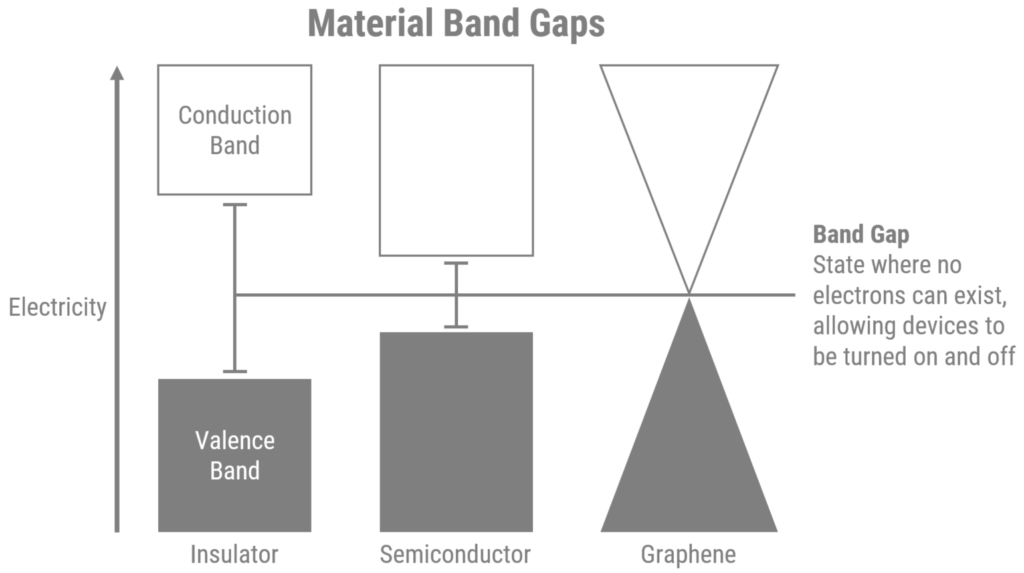 Until recently, methods to introduce band gaps into graphene have been inefficient, or have altered the material to the point of eliminating the benefits.

In April 2018, scientists led by the Catalan Institute of Nanoscience and Nanotechnology introduced a way to grow “graphenelike” material with a band gap. This significant step in developing graphene-based chips comes almost 15 years after graphene’s initial breakthrough in 2004, demonstrating the difficulty and long timeline of new material development.

CNTs have band gaps, making their introduction into computer chips easier — but mass production is a crucial issue.

Manipulating billions of tiny structures in CNTs is extremely difficult as the orientation of the nanotubes must be controlled to take advantage of their unique properties. Production methods will need to be improved to provide uniform, defect-free CNTs before widespread adoption can occur.

Market hurdles to carbon nanomaterial adoption are perhaps even more challenging than technical ones. New materials face suspicions and stasis as they try to integrate into existing supply chains.

As Amanda Barnard, a physicist who heads Australia’s Commonwealth Scientific and Industrial Research Organization, told the New Yorker in 2014, “We’ve got global investment on the order of trillions of dollars in silicon, and we’re not going to walk away from that.”

Incumbent players will improve existing products or simply ignore new materials before abandoning or significantly altering production assets. Full substitution of existing materials by graphene will most likely come after a long period of working in tandem with materials like silicon.

Another barrier is standardization. A review of 60 graphene products by the Graphene Council recently revealed that no one single material characteristic was shared by more than 75% of the products. If manufacturers are going to effectively market graphene, standardization will need to be introduced.

Additionally, graphene’s price will have to plummet if the material is to ramp up as a substitute. Graphene is scarce and expensive today, but it will need to transition to a commodity-like material to become a viable alternative to silicon-based semiconductors.

Once this happens, graphene-focused startups could be unable to compete on price. Smaller graphene startups could go out of business or face acquisition by semiconductor manufacturers or materials companies like Dow Chemical who might be looking to add graphene capacity.