Companies in this category provide tools that range from alternative trading systems to financial modeling and analysis software.

Since the financial crisis of 2008/2009, global capital markets have seen considerable change. Economic pressure, increasing regulatory scrutiny, and evolving client needs are a few of the conditions that have made capital markets ripe for disruption. In response, fintech companies are attacking all parts of the capital markets value chain hoping to increase efficiency and reduce opacity in financial services.

We define “capital markets tech” broadly to include software and technology companies that are augmenting or replacing securities issuance, trading, clearance and settlement, and operations. Companies in this category provide tools that range from alternative trading systems to financial modeling and analysis software. We will be exploring these categories in a later post.

So far, 2017 has seen approximately 112 deals worth $1B, already beating 2013’s annual total by 2 deals. At the current run-rate, deals are projected to hit a new record of 274 deals worth approximately $2.45B in funding.

Between 2013 through 2016, investors have consistently increased investments in capital markets technology. Deals hit a record of 216 in 2016 worth approximately $1.89B in funding.

Both deals and funding to capital markets tech have been generally on an upward trend since 2013, though funding did see a 2% dip in 2016.

One of the top investments so far in 2017 went to Symphony Communication Services Holdings, or Symphony, a communications and collaboration platform for financial services firms backed by a number of top financial and technology firms. Symphony raised a $63M Series C in Q2’17 that included participation from BNP Paribas, Goldman Sachs, and Google. The investment valued the company at $1B and made Symphony the latest fintech unicorn ($1B+ valuation). 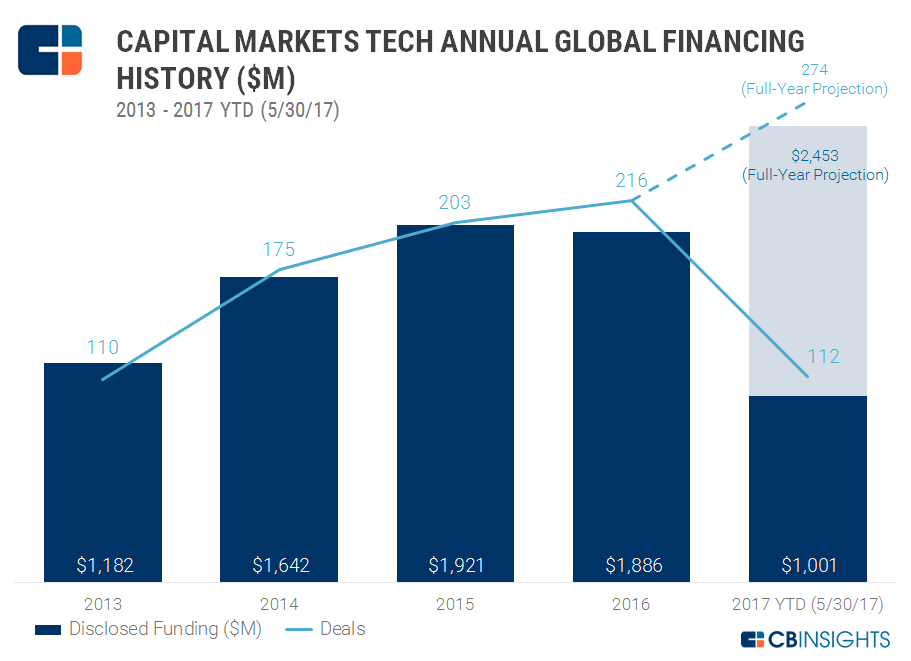 Fintech companies are disrupting all parts of the capital markets value chain. Look for Capital Markets Tech in the Collections tab.

Digging into the quarterly data, Q1’17 saw 66 deals to tie with the record set in Q3’15. The top deal in Q1’17 went to Confluent, a data analytics platform that is leveraged by traders to track portfolio performance. Confluent raised a $50M Series C that included smart money investors Benchmark, Index Ventures, and Sequoia Capital.

Deals trended up between Q3’13 through Q4’14 and dipped slightly before hitting a peak of 66 deals in Q3’15. After some back and forth in deal activity, deals have been trending up again since Q3’16.

Q2’13 saw a record surge in funding, up 1217% from Q1’13. The one-off spike was driven by a $500M mega-round private equity investment to market data and analytics platform Markit, led by Temasek Holding. Markit went public in 2014 and merged with competitor IHS in 2016. 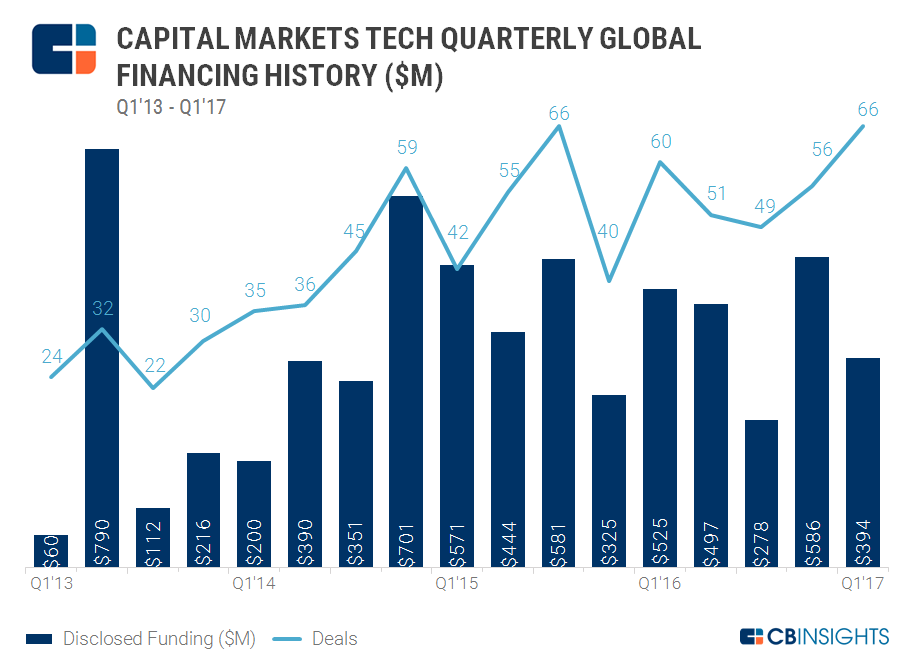 The top early-stage deal in 2017 YTD was a $31.1M Series A investment to ClearBank. The investment included PPF Group and a series of angel investors. ClearBank is a cloud-based clearing bank that is leveraging technology to replace dated infrastructure. Of note, ClearBank was recently approved as the UK’s fifth clearing bank. Incumbent banks Barclays, HSBC, Lloyds Group, and RBS are the other 4 UK clearing banks.

Late-stage (including Series D, Series E, Growth Equity, and Private Equity) deal share declined from 8% 2016, to 6% so far this year, while deals falling into our “Other” category (including corporate minority, convertible notes, and other venture capital rounds) decreased from 25% to 20%. 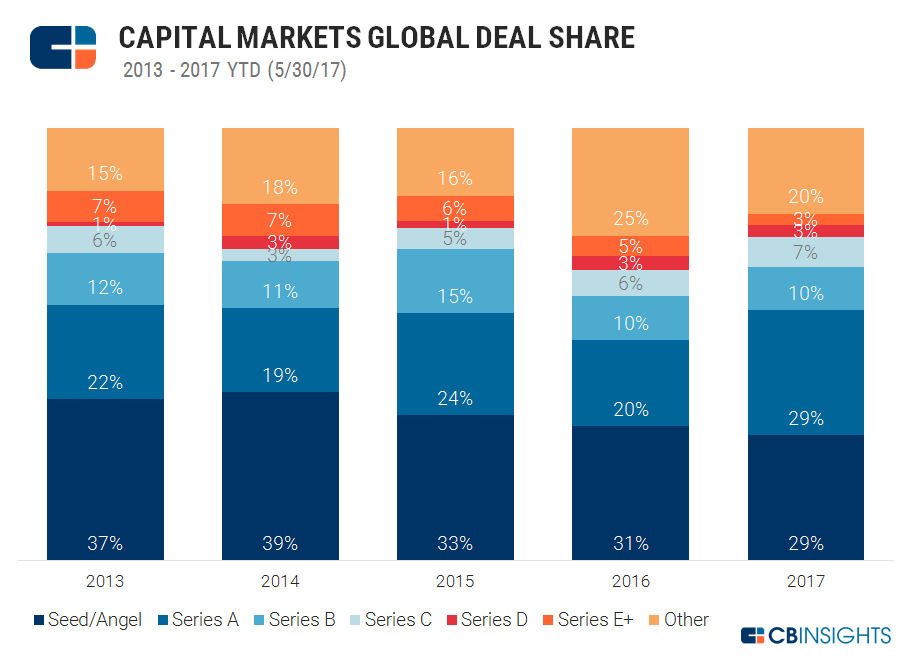