Research Brief
1521
From WhatsApp to Twitch, the 15 tech exits of 2014 that exited for the most with the least investment. These 15 companies exited at an aggregate valuation of $35.9B after having raised total funding of $638M.

We analyzed CB Insights’ IPO and M&A data to identify the 15 most capital efficient exits of 2014. In order to be considered, the company had to have a disclosed exit valuation of at least $100M based on their valuation at the time of exit. We then divided by the amount of financing they’d received prior to exit.  The resulting ratio gives us a sense for capital efficiency or what we also call value creation.

The most efficient exits of 2014 raised just over $42 million on average. Clearly, these were companies who didn’t raise mega-financing rounds. In many ways, they stand in contrast to many of today’s tech high flyers which are raising $100 million financings quite regularly. There were 24 U.S. venture-backed tech startups which raised $100 million financing rounds in just the first half of 2014. 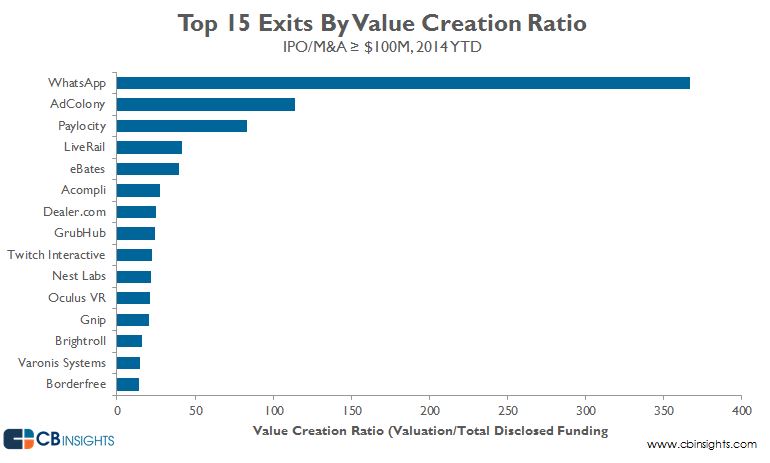 The data and trends on 2014’s top exits by value creation below.  If interested, here are details on 2013’s most capital efficient exits which were headed up by Veeva Systems and Tableau Software.

WhatsApp number #1 by a long shot

The 15 most capital efficient exits by value creation in 2014 racked up an aggregate valuation at time of exit of $35.9B on total funding of $638M. By comparison, 2013’s top valuation exits netted an aggregate valuation of $18.57B on $471.5M. The jump can be attributed to mobile messaging app WhatsApp‘s acquisition by Facebook for $22B after raising just $60 million in financing from sole investor Sequoia Capital. Interestingly, Facebook acquired multiple companies who appear on the most capital efficient exits of 2014 list.

WhatsApp’s capital efficiency or value creation ratio was lower than last year’s winner though – cloud-based life sciences software firm Veeva Systems which was valued at $4B in its IPO on just $4M of financing from Emergence Capital Partners.

Smaller exits that made it on the list this year include email app Acompli, recently acquiredby Microsoft for $200M, as well as Gnip, which sold to Twitter for $134M, but took under $7M from investors including SoftTech VC, Foundry Group and First Round Capital.

California-based companies dominate on the VC funding front, and the Golden State is also home to the majority of 2014’s most capital efficient exits as well. In fact, Silicon Valley-based and SoCal-based firms made up 2/3rds of the exits. Colorado (Gnip) and Vermont (Dealer.com) also made the list. 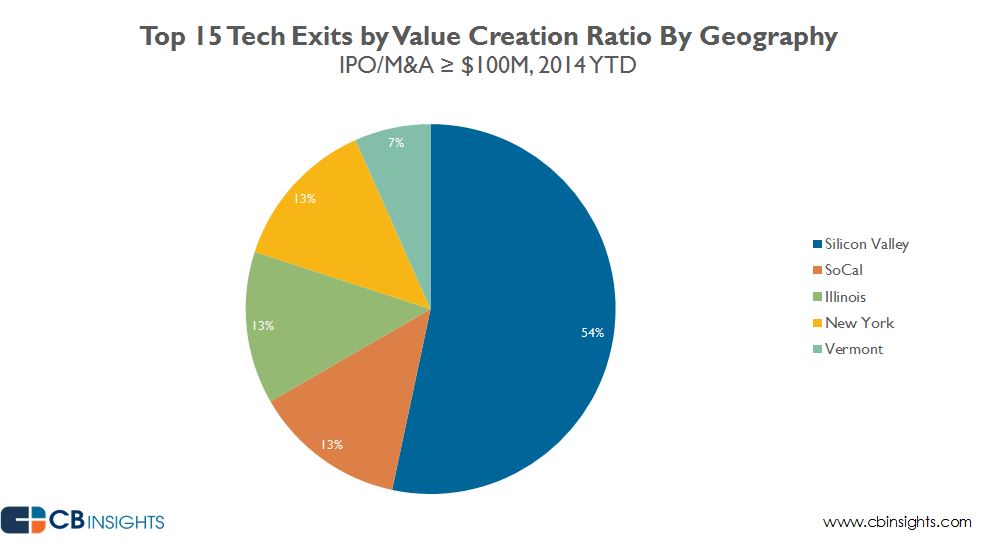 Who got in early? Felicis Ventures most prominent

When we peel back the VC investors who got in to these capital-efficient exits at the early-stage (seed/Series A), Felicis Ventures stands out for getting into several including BrightRoll, Acompli and Twitch. Jeff Clavier’s SoftTech VC and Israel-based firm Pitango VC also counted multiple exits on the list. Interestingly, getting in ‘early’ sometimes also means you wait for longer. Ebates, acquired by Rakuten for $1B, first took funding from VCs including Canaan Partners, Redpoint Ventures and Foundation Capital during the last dot com boom.

Note: Data is as of December 5, 2014. If M&A valuation included earnout incentives, those were included in the total valuation of the exits.

Want to dive into VC-backed exit data? Login to your CB Insights account or create a free one below.