Research Brief
3489
The top deal of Q3'16 was a $3.8M round to CannaKorp, based in Massachusetts, which is developing a Keurig-like single-use vaporizer system.

Last year saw a huge bump in financing to US-based cannabis startups, but so far this year, investors seem to be pulling back, as regulatory issues remain in flux and the presidential election creates uncertainty about how a new administration will handle varying state laws.

The trends in deal activity and dollar funding have tended to follow different directions. Q1’16 saw a huge sequential drop off in dollars invested but only a slight decline in deals. In Q2’16, deals dropped significantly, while dollars bounced back.

Deals have held steady in Q3 while dollars have fallen to their lowest level since Q3’15.

US-based cannabis startups saw 16 deals last quarter, on par with deal count in Q2. But those two quarters’ deal counts were way down compared to Q4’15 and Q1’16, which saw 32 and 27 deals, respectively, the two highest quarters for deal count to date.

The top deal of Q3’16 was a $3.8M round to CannaKorp, based in Massachusetts, which is developing a Keurig-like single-use vaporizer system. There was only one other deal for more than $1M last quarter, a $1.6M seed round to Colorado-based Baker, a marketing platform aimed specifically at dispensaries.

Dollars invested have fluctuated significantly over the past seven quarters. After a steady rise in funding from 2013 through Q1’15, dollars invested have been erratic on a quarterly basis. The most recent quarter saw the lowest total disclosed funding since Q3’15.

Q1’16 saw plenty of deals but for smaller amounts, with only one disclosed raise above $5M, the $5.14M round to cannabis growing infrastructure company GrowCo. No other startup raised more than $2M in the quarter.

Q2’16’s funding uptick to over $40M was helped along by deals to MedMen, a $15M financing, and Eaze Solutions, which received $8.3M in funding in a Series B round.

Q3 saw no disclosed deals above $5M and only the one deal to CannaKorp above $3M. 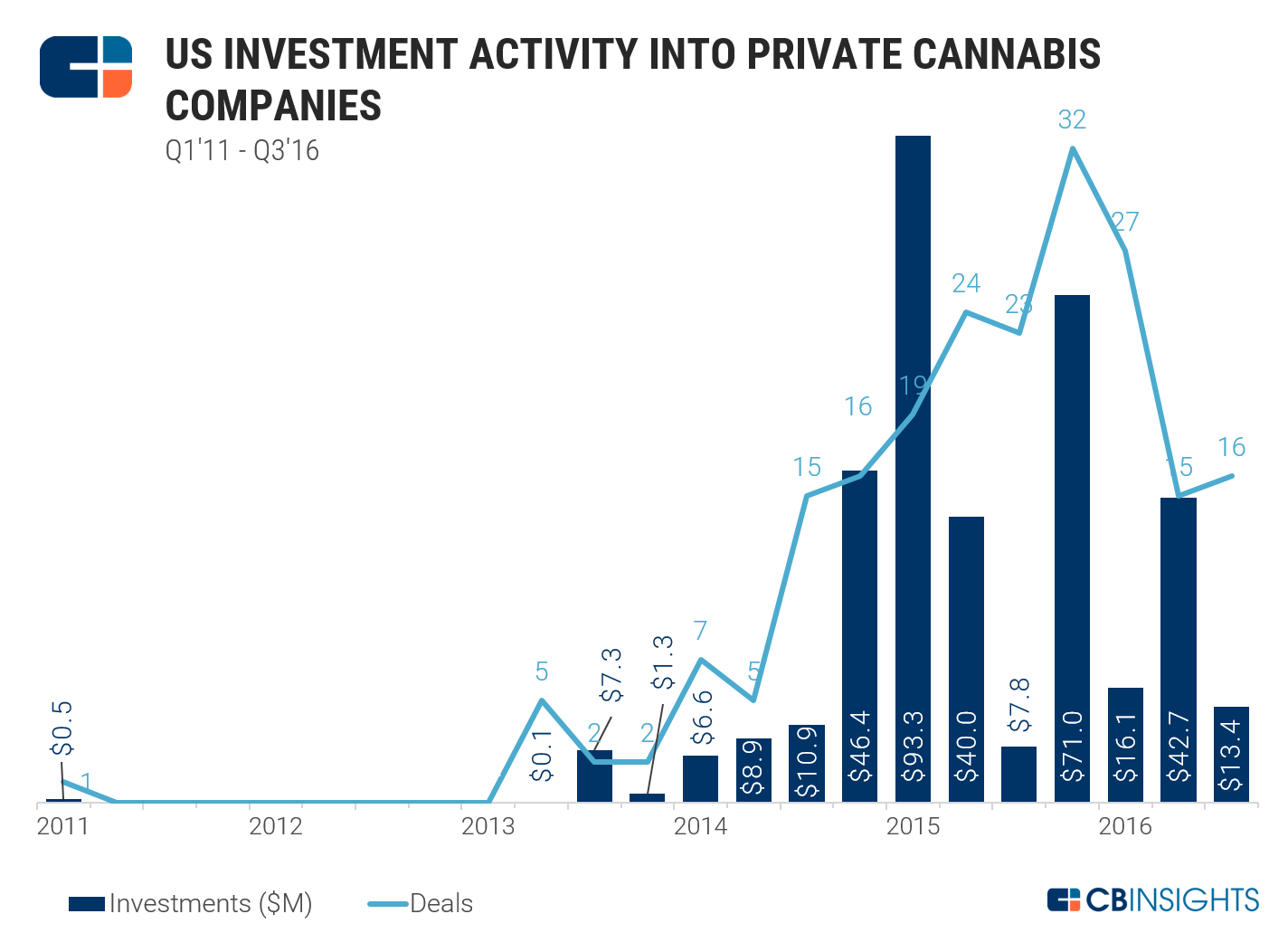 This year is on track for significantly lower totals, though still above 2014 funding levels. So far in 2016 through 10/13/16, there have been 62 deals to private US-based cannabis startups. If trends continue at their current pace, the total deal count for the year will come in at just fewer than 80 deals, 25% lower than the previous year, while funding is on track to come in at $95M, less than half of 2015’s total. 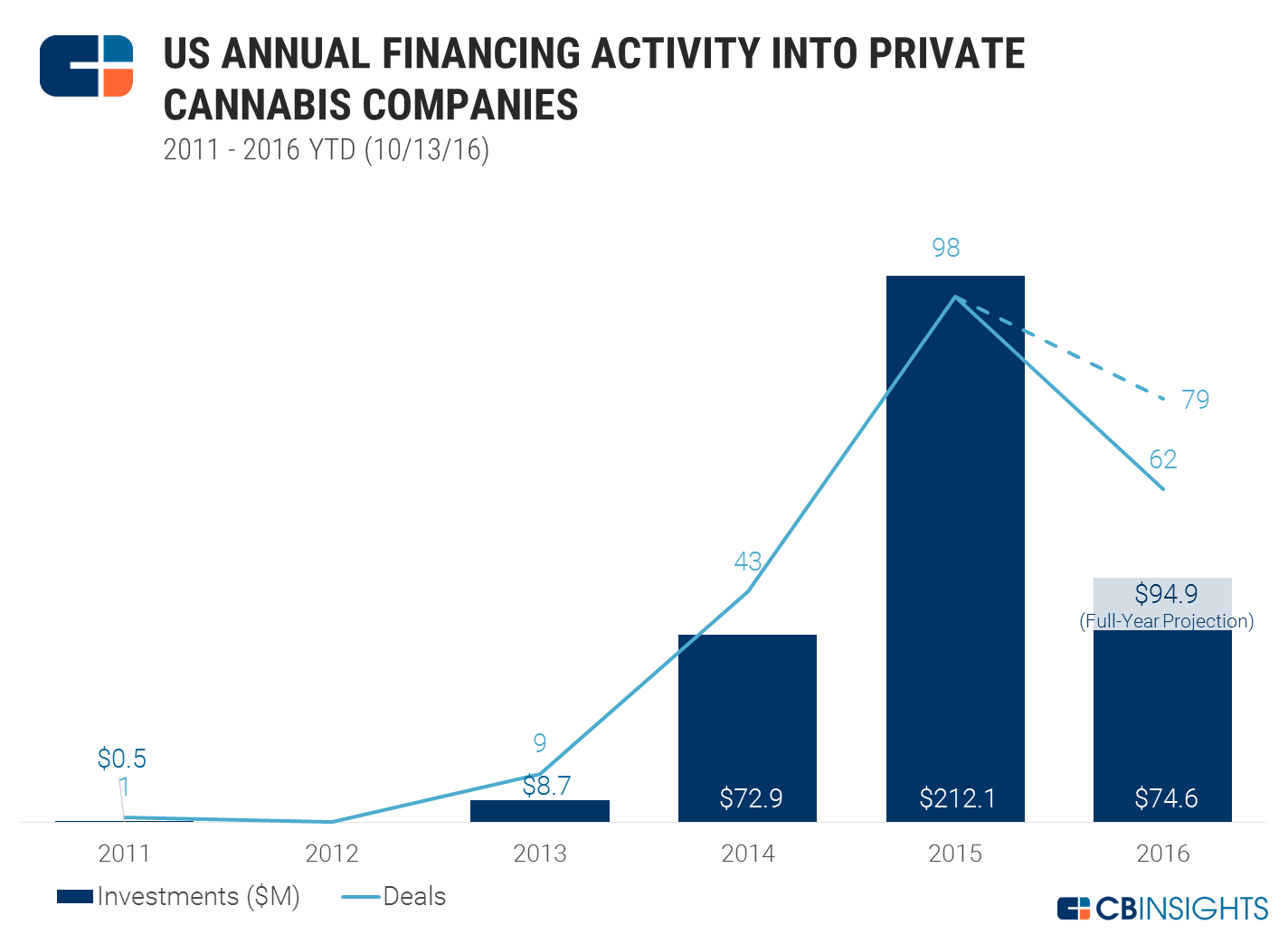 The top three states in the US for private cannabis funding deals are California, Colorado, and Washington, in keeping with the permissive legal status of cannabis in these three states compared to many others, as well as California’s typical place as the center of much startup activity.

Colorado is just behind California for cannabis deals from 2011 through 2016 year-to-date (through 10/13/16). California has seen 65 deals in that time frame, while Colorado has seen 60. Washington, in third place, has been home to only 17 deals since 2011.

However, Washington leads for total disclosed dollars invested, at $89M. Among the large rounds to cannabis startups was a $25M raise in Q4’15 by PharmaCannis, based in Illinois.

Want more data on the cannabis industry? Check out our venture capital database below.