Research Brief
2494
Momentum is picking up for cannabis-focused startups, which are seeing all-time highs in deal numbers as the space continues to mature.

Despite being an industry in regulatory flux, investors continue to ramp up their activity in the legal cannabis industry. Q4’15 was a record for deals to startups in the space, with nearly 30 in the quarter. This is up from just 2 deals in the same quarter just two years ago. Funding also passed $65M, the second-highest funding quarter since the peak of $94M in Q1’15, which included the giant $75M financing into Privateer Holdings, which is a private equity firm focused on legal cannabis.

While early financing into the space was focused more on the operations and product, we’re starting to see funding in some of the other parts of the infrastructure, including cannabis industry-focused blockchain applications (SericaPay), packaging (FunkSac), and compliance (Compliant Cannabis). 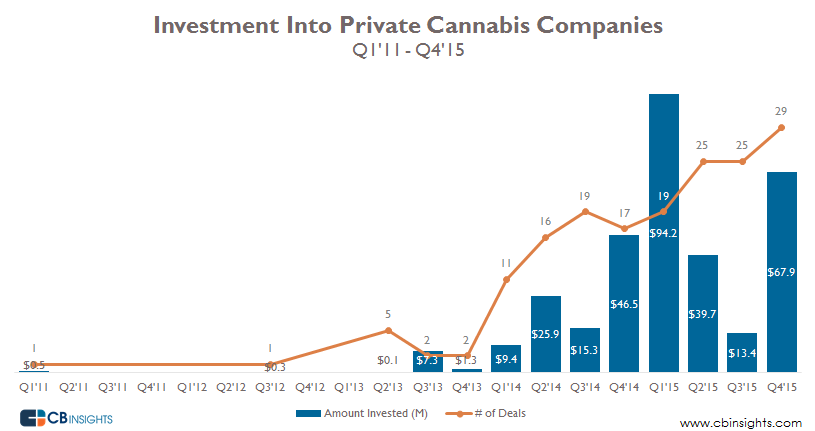 Though the industry is still growing (like a weed), there aren’t many active investors in the space currently. So, not surprisingly, the top 3 most active investors are all focused specifically on investing in the cannabis space.  CanopyBoulder, a cannabis focused accelerator, is by far the most active with investments in more than 15 companies since 2011. ArcView Group, and Casa Verde capital, also focused on cannabis, rounded out the top 3.

Want more data on the cannabis industry? Check out our venture capital database below.