Research Brief
2525
Equity funding to private cancer therapeutics companies was up 153% in the year. The current quarter has already set a deal record.

We recently highlighted how cancer drugs were an area of high interest for pharmaceutical corporates, with one-fifth of their deals to private companies since 2013 going to cancer drugs and therapies. These included deals to ADC Therapeutics, IPO-bound Corvus Pharmaceuticals, and Unum Therapeutics.

With this in mind, we used our database to analyze funding to private biotechnology and drug discovery companies globally focused on cancer treatment, including the use of immuno-oncology (therapies that target the immune system to help fight cancer), oncolytic viruses (viruses that kill cancer cells), antibodies, and drugs that target the cancer stem cells thought to lead to tumors.

Together, these companies have raised more than $6.7B in aggregate funding since 2011, with deal count nearly doubling from 2011 to 2015. Our analysis includes all equity funding as well as convertible note rounds.

This report contains the following information:

Apart from a 22% increase in deals from the previous year, 2015 also had 5 $100M+ mega-rounds, with the largest being a $320M Series A round raised by UK-based immuno-oncology company, Immunocore.

Both deals and dollars have been rising steadily since 2011, except for a drop in funding in 2012.

Annual growth in deals was significantly higher after 2013 (with 22% or higher growth in deal activity in both 2014 and 2015) compared to the two earlier years (when deal growth was 11% and 2% respectively). 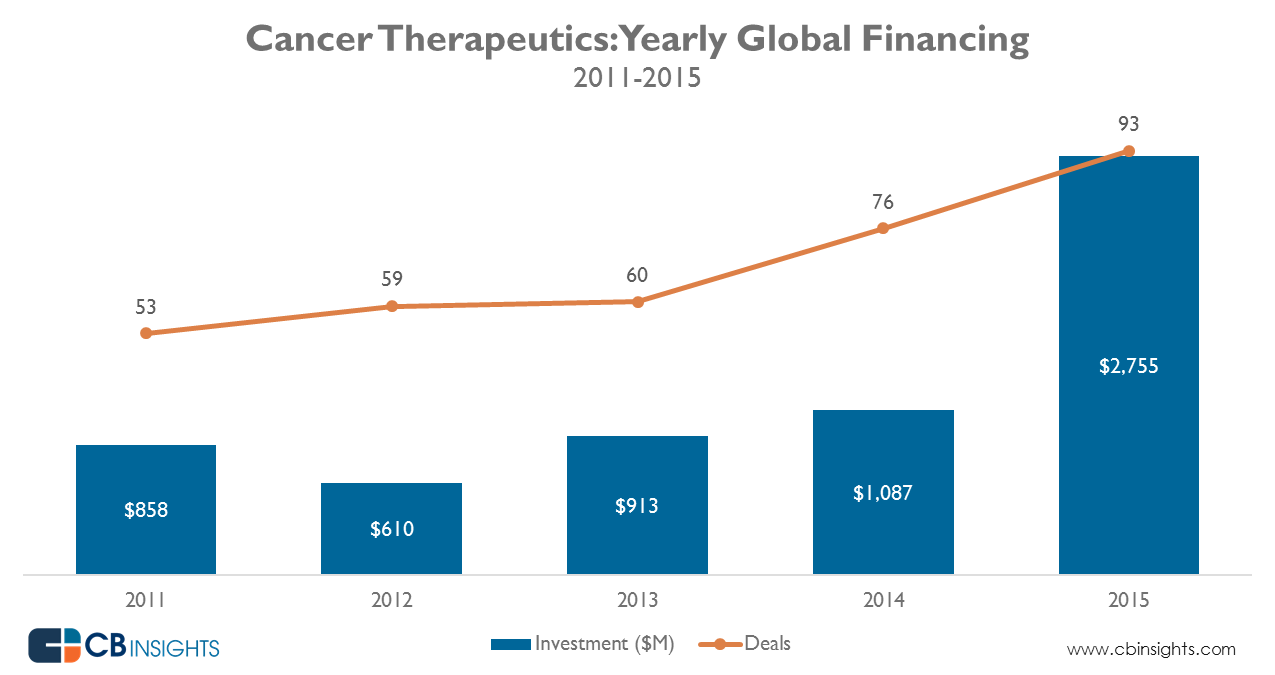 Dollar funding reached a 5-year quarterly high in Q3’15, led by a $102M Series A round raised by California-based Gritstone Oncology. The average deal size that quarter was $52M.

The current quarter, Q1’16, has already reached a five-year quarterly high in deals. More than 25 companies have raised rounds this quarter, for an amount exceeding $550M in aggregate funding. This includes a $75M Series A round raised by Palo Alto, California-based Forty Seven — backed by investors including Google Ventures and Lightspeed Venture Partners — and a $67M Series A round raised by NextCure, backed by investors including OrbiMed Advisors, Pfizer Venture Investments, and Sofinnova Ventures. Both Forty Seven and NextCure are immuno-oncology startups. 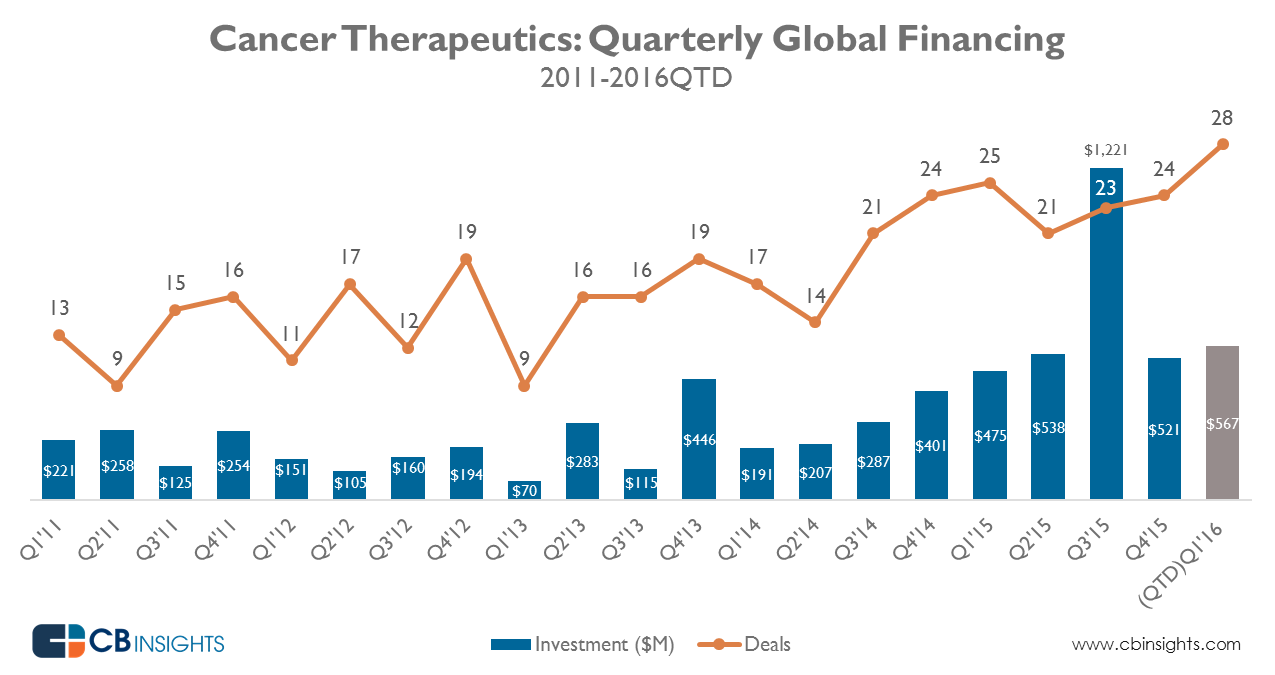 The largest deal volumes went to early-stage startups across all five years, with 43% of disclosed deals going to seed and Series A cancer therapeutics companies in 2015.

The “other” category includes rounds where the stage was not disclosed, corporate minority deals, and convertible notes. 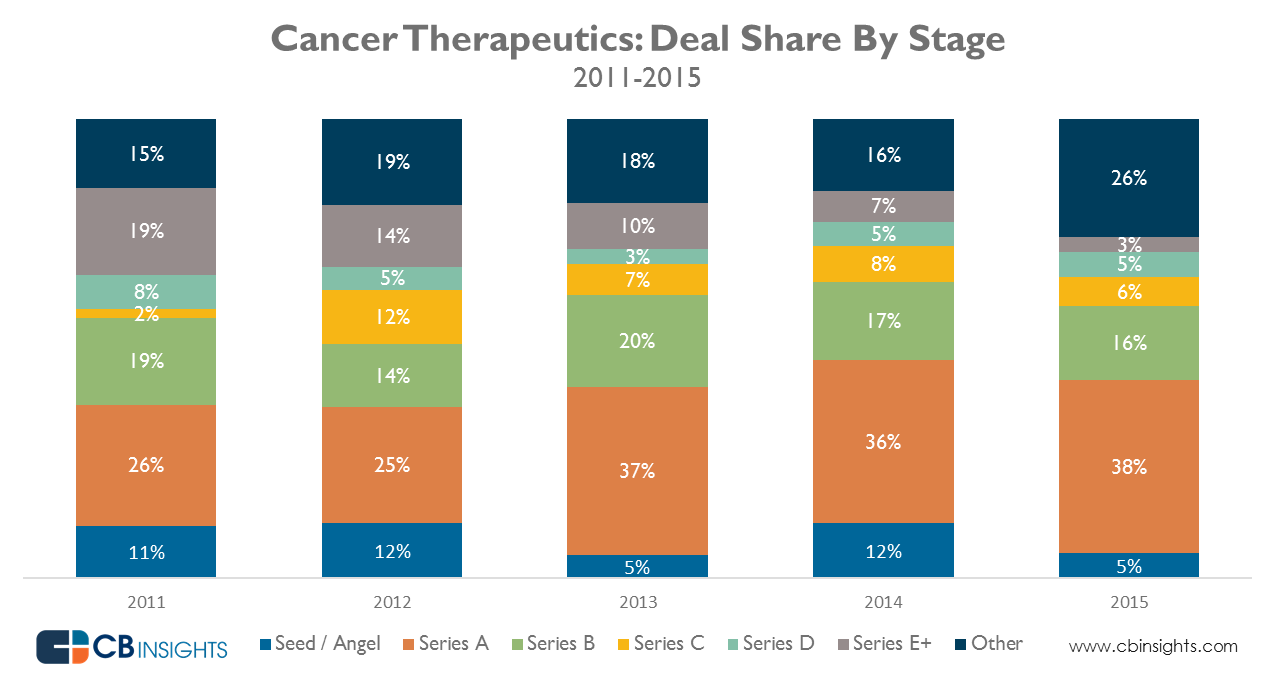 The second-most active VC on the list, Massachusetts-based MPM Capital, announced on its website that it has partnered with wealth management firm, UBS, to create an oncology fund “focused exclusively on oncology that will invest in both private and public equities.” Its most recent investment includes participation in a $43M Series B round raised by Tizona Therapeutics.

The most well-funded company on the list is Stemcentrx, which joined the unicorn club last year. The company is backed by investors including Founders Fund, Artis Ventures, and Sequoia Capital. Stemcentrx is focusing on targeting and destroying cancer stem cells.

Antibody therapeutics company Symphogen — the second highest-funded company on the list — raised a $75M convertible note round in 2015.

The rankings are based on equity funding rounds raised (including convertible notes). One of the companies on the list, Corvus Pharmaceuticals, is planning to IPO late this month.

Sign up for our venture capital database below for more information on healthcare companies.