Research Brief
3611
Immunotherapy accounts for 50% or more of the deals to cancer startups. The approach is considered a key advance in cancer treatment.

Earlier this year, Stemcentrx, a company developing oncology therapeutics that use the body’s immune system to fight cancer, was acquired for upwards of $10B by pharmaceutical giant AbbVie in one of the largest ever exits of a VC-backed company. Deals to similar immuno-oncology startups have been increasing year-over-year and so far occupy half of all deals to private oncology therapeutics companies this year.

Traditional chemotherapy broadly targets all rapidly dividing cells. Many of the side effects of traditional chemotherapy such as hair loss, organ damage, and immunosuppression are a direct result of its indiscriminate targeting mechanism. Immunotherapy, in contrast, refers to a set of treatment options that stimulate the body’s own immune system to fight against cancer cells. Because immunotherapies are not poison to non-cancerous cells, treatments are generally well-tolerated. For this reason, immunotherapy has been increasingly adopted by physicians and investors alike and is widely considered the future of cancer treatment.

We used CB Insights data and the CB Insights Trends tool to look at investment activity and media attention on the cancer therapeutics industry, especially immunotherapy.

This brief is broken down as follows:

CB Insights Trends is software that analyzes millions of media articles to identify and understand emerging technologies and innovations.

In October, the National Cancer Institute listed immunotherapy research as one of its “transformative research topics” that would significantly advance cancer treatment. And recently, attention paid to immunotherapy or immuno-oncology has surpassed media attention on chemotherapy as a whole. In addition, targeted therapy, another relatively new area of cancer therapy in which drugs act on precise targets associated with cancer cells, has also experienced growth in media attention. 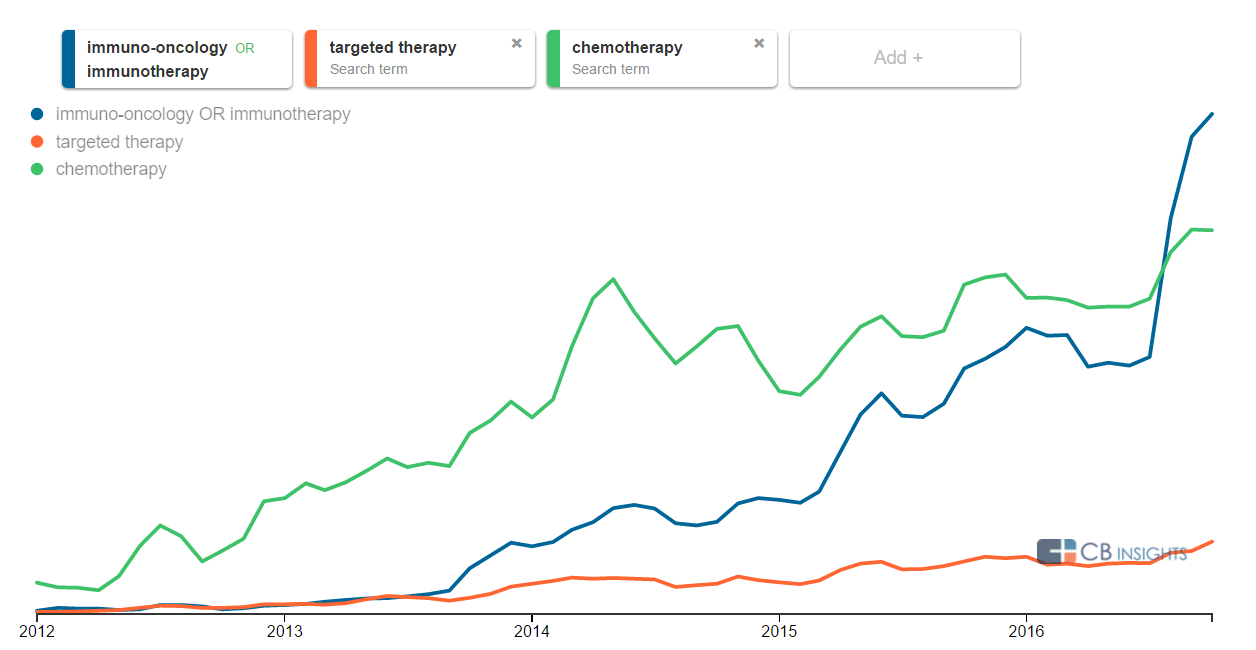 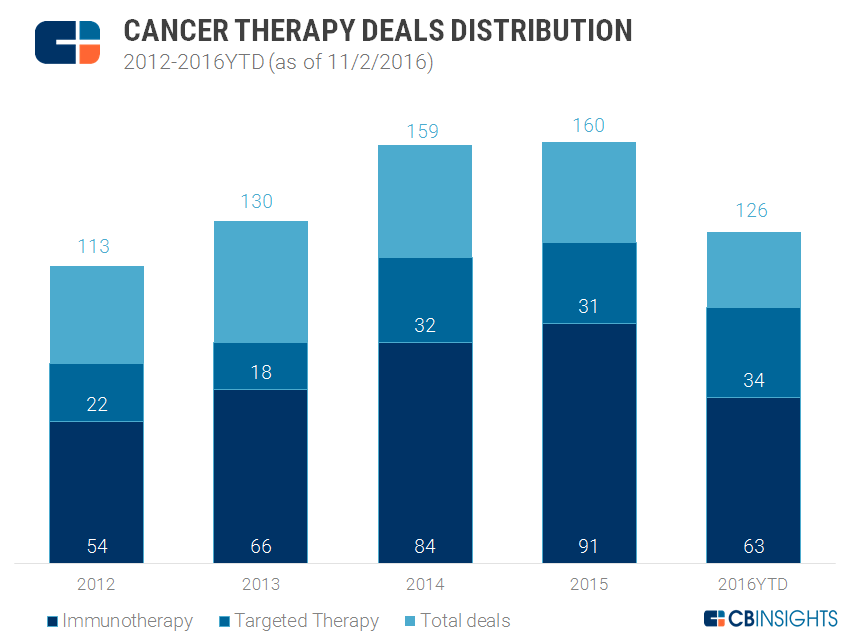 There have been 14 $100M+ megarounds to immuno-oncology startups since 2012, 9 of which occurred after January 2015. The most well-funded private cancer immunotherapy company is Denmark-based Symphogen which raised almost $360M over the last 12 years. Symphogen develops antibody-based therapies initially targeting colorectal cancer and glioblastoma, a common form of brain cancer.

In second is CureVac, with funding from the Bill & Melinda Gates Foundation. The company is developing a vaccine for prostate cancer and immunotherapy treatments for lung cancer.

The venture capital firm with the most investments to unique immunotherapy startups since 2012 is New York-based OrbiMed Advisors. OrbiMed recently participated in the $67M Series A of Maryland-based NextCure, with co-investments from Lilly Asia Ventures and Pfizer Venture Investments, among others. As a sign of confidence in the immunotherapy sector, this investment was made despite NextCure being in the nascent stages of the drug development process.

Want more data on oncology startups? Log in to CB Insights or sign up for free below.