Early-stage and fintech startups in the UK are also seeing significant upticks in financing activity.

Following Britain’s vote to exit the European Union in Q2’16, there was immediate reaction among investors and analysts speculating on how Brexit would impact financing activity in the UK.

Tech-industry leaders and VCs had been some of the most vocal opponents of the “vote leave” campaign, with many fearing that the economic uncertainty (and loss of EU-backed capital) resulting from a Brexit vote would create a “Doomsday scenario” for the UK’s booming startup scene.

So far, though, CB Insights data shows that annual financing to VC-backed companies in the UK is on pace to reach a six-year high in terms of both deals and dollars, with no sign of a Brexit private markets slowdown in sight. 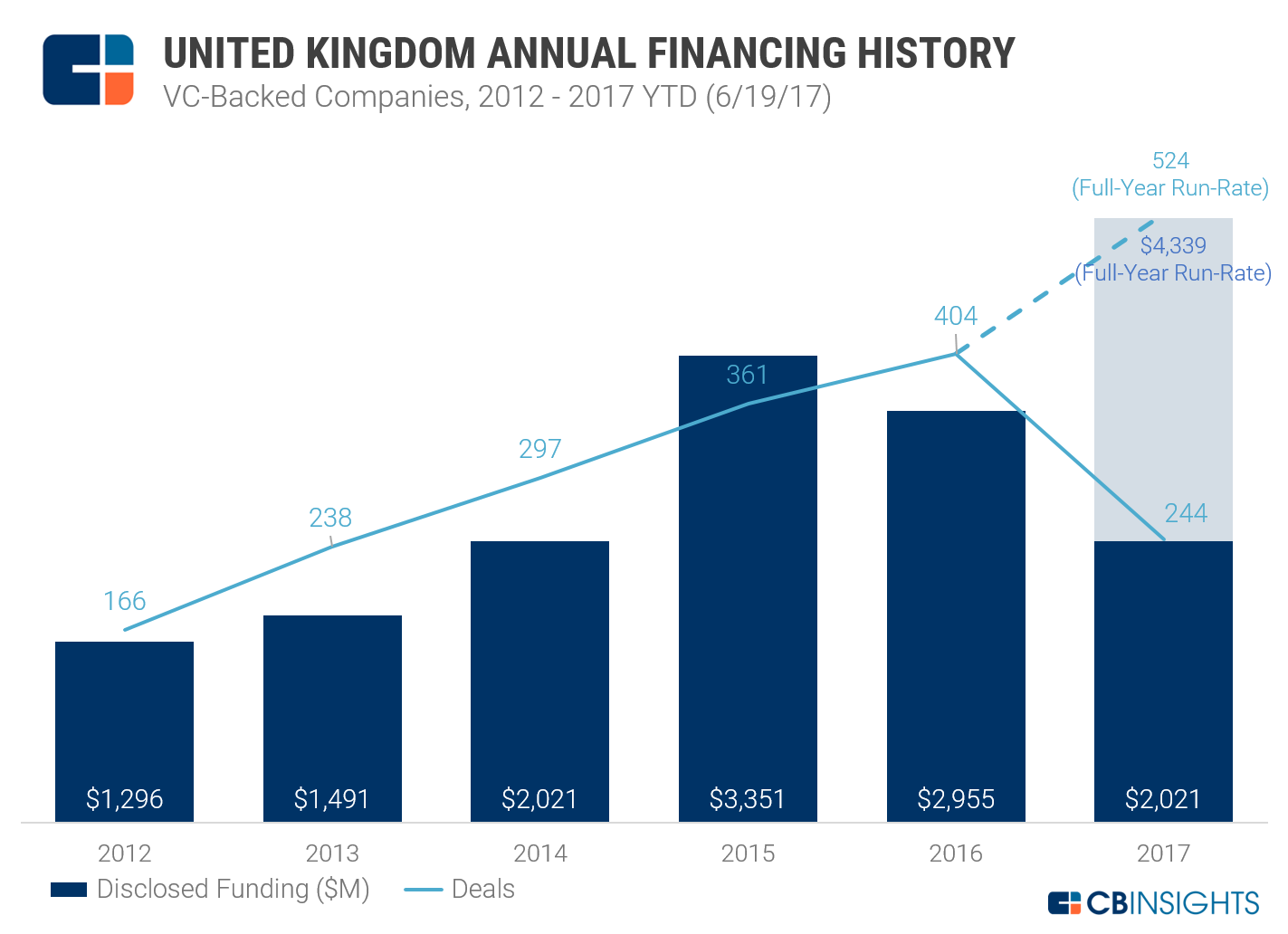 In fact, deal numbers have been steadily increasing over the last five quarters, to reach a high of 138 deals in Q1’17, marking a 64% year-over-year increase compared to Q1’16. And, while quarterly financing totals fluctuated over the course of 2016, Q1’17 saw $956M invested, the best quarterly funding total in the last year. 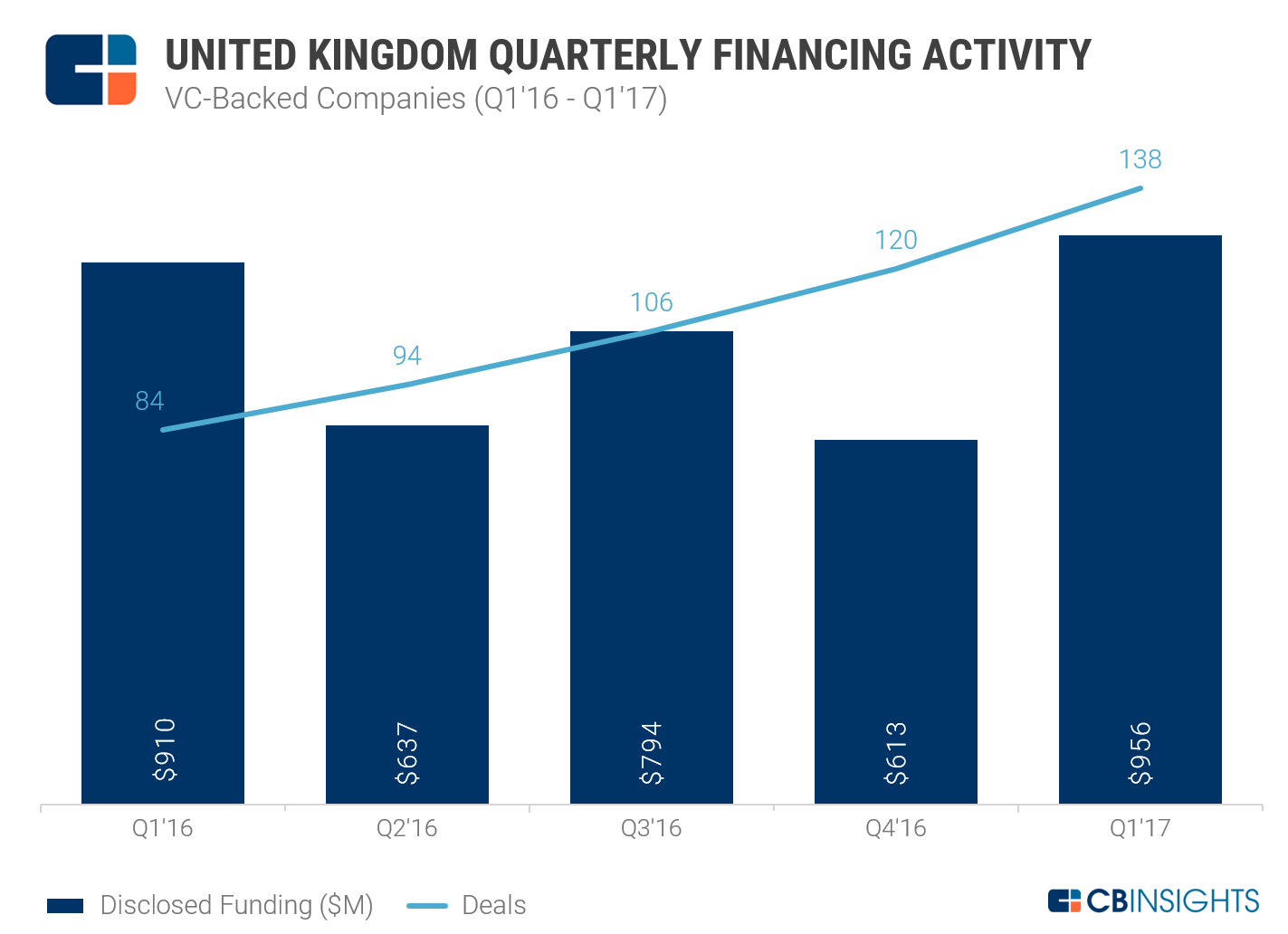 Early-stage VC-backed companies in the UK have seen the lion’s share of activity since the Brexit vote, with deals and dollars up in each of the last four quarters. There were 91 financings to VC-backed early-stage startups and $291M in disclosed funding in Q1’17, totaling nearly 66% of quarterly deal activity and 30% of total Q1 funding.

Top Q1’17 early-stage deals in the UK included a $10M Series A to Monese, a fintech startup working to provide banking services for European immigrants and expats, and a $17.2M seed round to Starship Technologies, which is building a fleet of self-driving delivery robots. 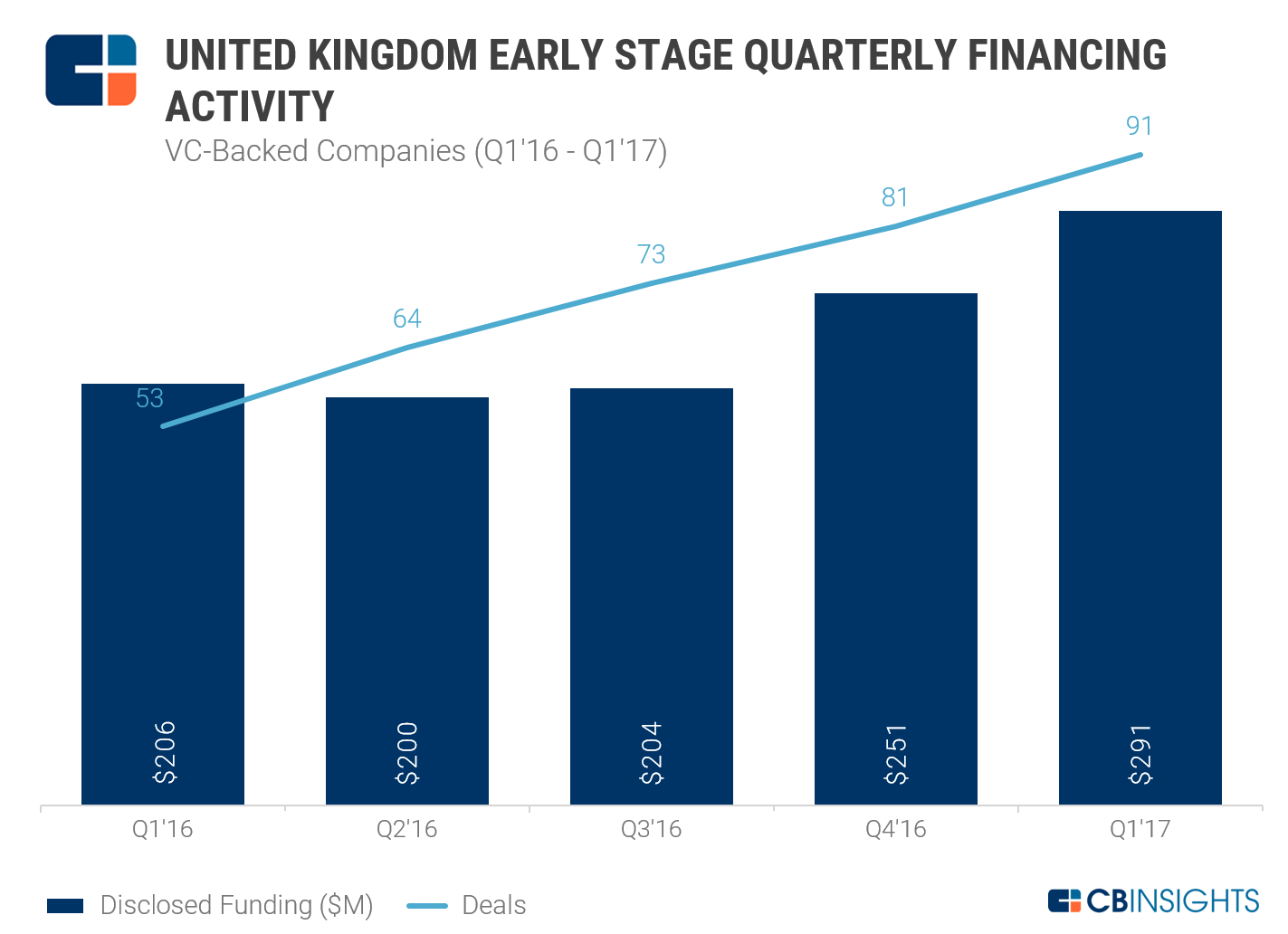 UK-based fintech startups have also seen upticks in activity over the last couple quarters, after a slight decline in early to mid 2016. Amid a number of regulatory initiatives including a “sandbox” dedicated to early-stage fintech startups in the UK, funding to VC-backed UK fintech startups saw a major bump in Q1’17.

This year’s first-quarter spike marks a 43% YoY increase in UK fintech deals from the pre-Brexit quarterly total in Q1’16, which was followed by two consecutive quarters of slower activity. 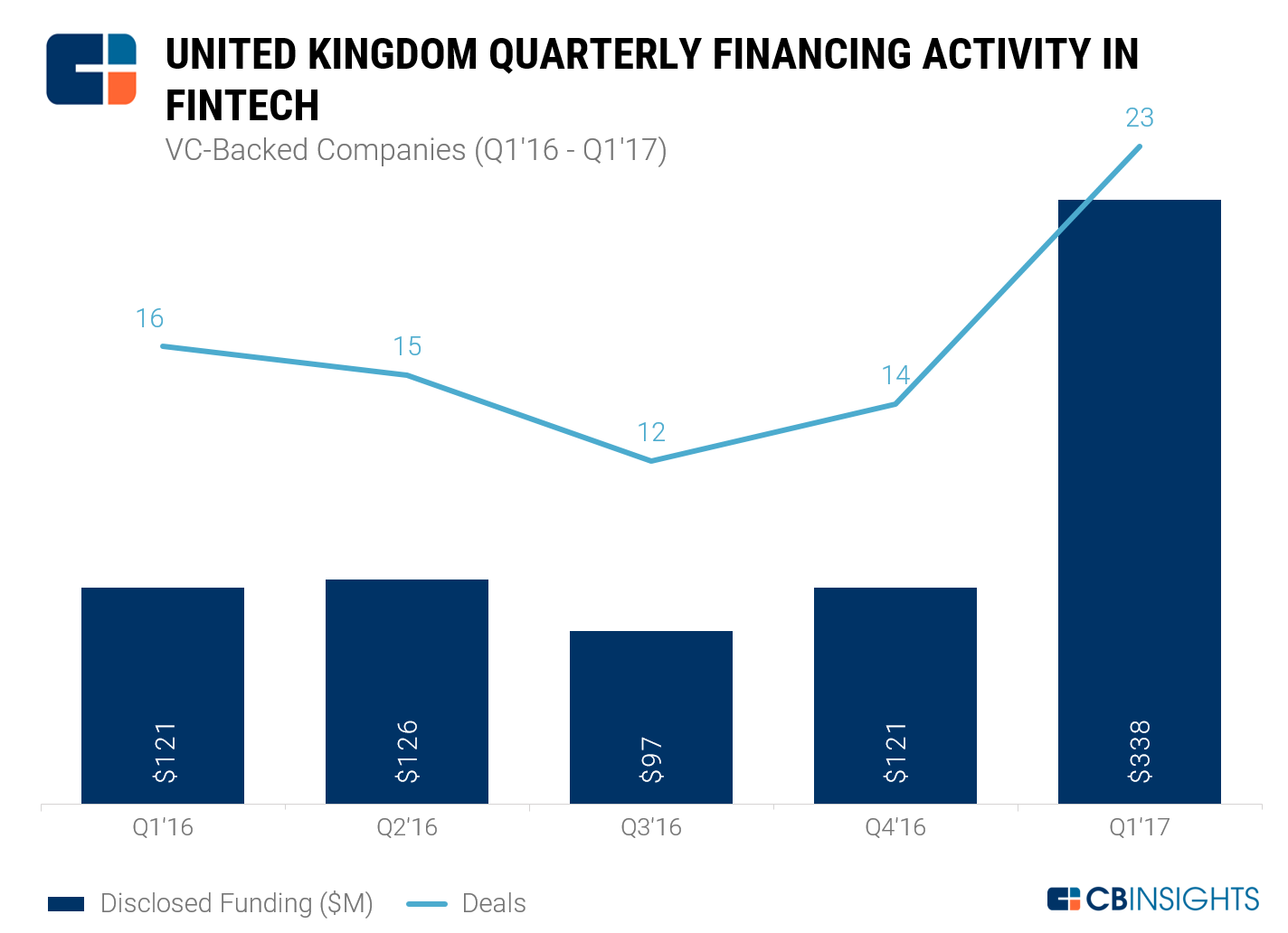 Looking at financings in France, there’s also no indication that Brexit concerns are stalling funding activity to other high-profile European tech hubs.

Deal activity in France has increased significantly of late. Q1’17 saw 104 deals to VC-backed companies in France compared to just 61 in Q1’16. 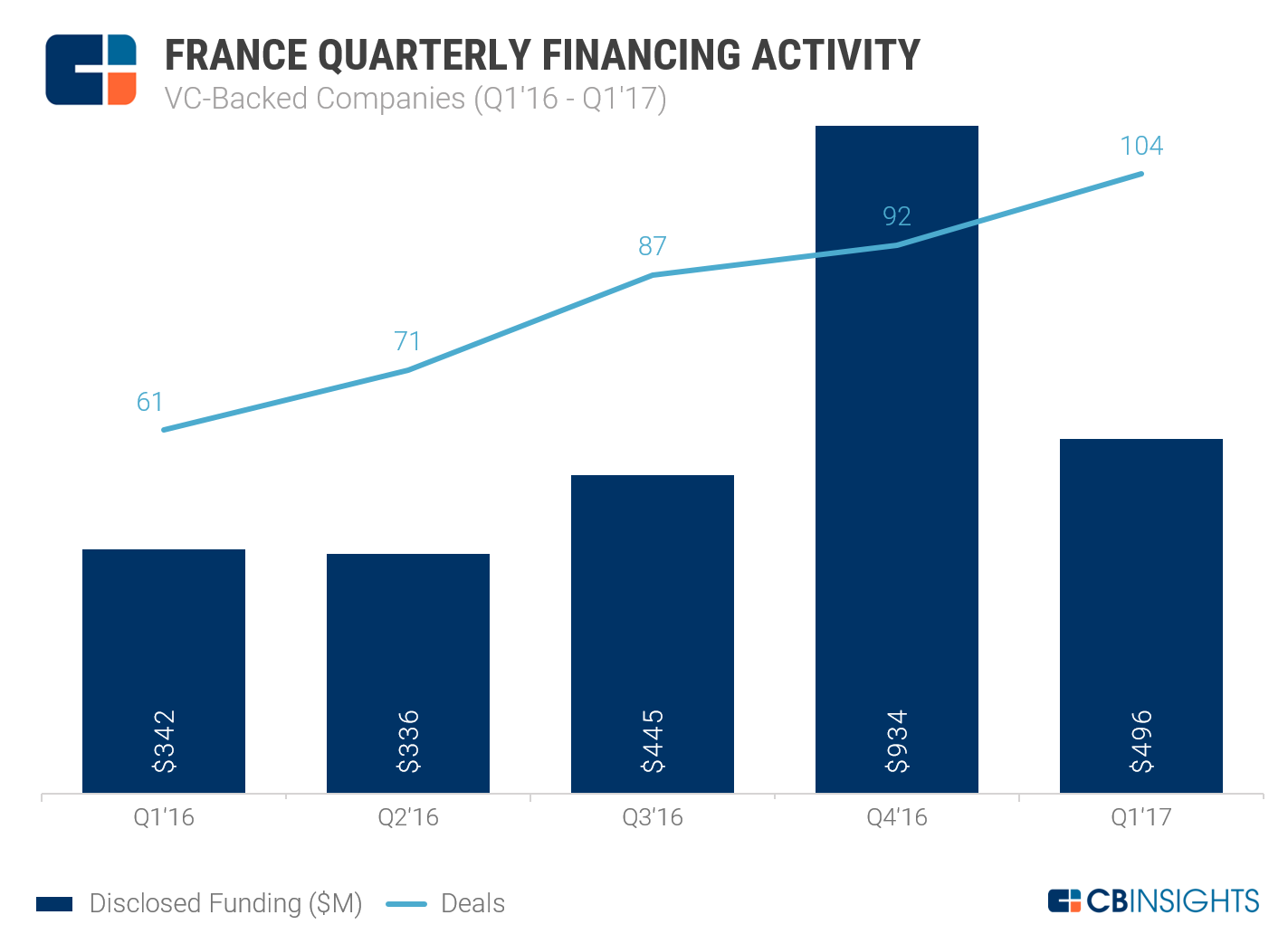 Want more data about top UK startups? Log in to CB Insights or sign up for free below.