15 VC-backed bot startups have raised their first VC rounds so far this year.

Advances in artificial intelligence algorithms have put chatbots and voice assistants in the spotlight, with investor interest in the space increasing in recent months.

Previously, General Catalyst had funded Digit — a bot that tracks your spending — and Angel.ai (f.k.a. GoButler) in 2015.

Horizon Ventures backed Viv Labs, which recently demoed its Siri-like intelligent voice interface, and Meekan, a smart-scheduling assistant which was acquired by Doodle last quarter (not shown on the timeline below as it does not include exited companies).

Digit, which raised a Series B round this month from investors including Baseline Ventures, General Catalyst Partners, and Google Ventures, is the most well-funded startup on the timeline below, which includes 30 bot startups to receive VC backing since 2014. Scheduling assistant X.ai ranked second in terms of funding, and is backed by investors including Lerer Hippeau Ventures, FirstMark Capital, Pritzker Group Venture Capital, and Two Sigma Ventures.

The timeline below only includes companies primarily focused on a bot. It also excludes APIs and bot development platforms like Myra Labs and GupShup. 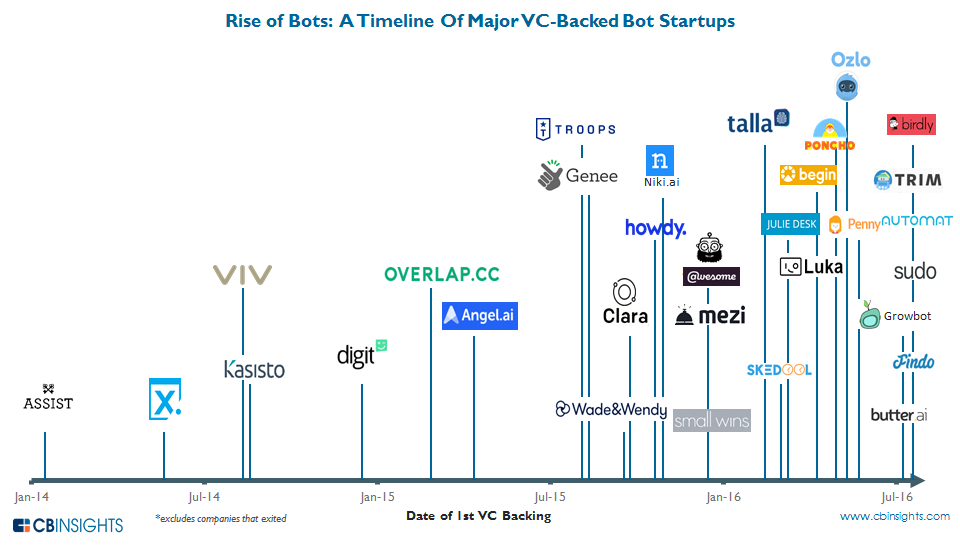 Want more data on bot startups? Login to CB Insights or sign up for free below.