Blue Apron has just priced its IPO at a price per share much lower than originally expected. The company opened at $10 per share when it began trading on 6/29/17, well below its initial estimated range of $15 to $17.

The lower price gave the meal kit startup an IPO valuation of approximately $1.9B, marking the IPO as a down exit for the company after it was previously valued at $2.6B.

While Blue Apron is among the most prominent players in the meal kit and wider food delivery spaces, the $13.7B acquisition of Whole Foods by Amazon no doubt influenced investors’ appetite for the Blue Apron IPO. In addition, although the startup has experienced a huge amount of growth over the last several years, profitability has remained elusive, churn has been a problem, and competition overall remains fierce in the space.

We used CB Insights’ Enhanced Valuation capability to track the historical value rise (and fall) of Blue Apron against another food delivery startup, HelloFresh. We also compare Blue Apron’s private market metrics relative to its valuation on a price-to-sales basis against larger supermarket comparables such as  Kroger and Whole Foods, as well as HelloFresh.

Below, we compare the private market valuation histories of Blue Apron and HelloFresh.

However, it should be noted that this round of funding actually represented a downround in which the startup’s price per share dropped from $16.66 to $13.33. Often a company’s post-money valuation can still rise amidst a drop in share price due to an infusion of cash from the round and other factors.

Subsequently, Blue Apron’s valuation rose to $2.6B in May 2017 due to a recent stock option issuance at a price approximately 20% higher than the price-per-share of $13.33, which was determined during the Series D round. However, the higher valuation was short-lived as the company’s value dropped to approximately $1.9B during its IPO today, marking a down exit for the company. As discussed above, Blue Apron was planning on pricing its IPO in the $15 to $17 per share range, but ultimately had to set the price at $10 per share in the wake of Amazon’s acquisition of Whole Foods, and amid heightened general competition in the grocery and food delivery space.

Comparatively, HelloFresh’s valuation history has taken a different path. The startup’s value increased dramatically from $680M to $2.9B after an $84.7M Series F round of funding in Q3’15. However in Q4’16, the company’s value declined to $2.09B after the company received $88.5M as part of a Series G down round.

HelloFresh’s recent down round is a reminder that the food delivery space has continued to struggle with unit economics, as well as a number of high-profile shutdowns, including Maple and Sprig most recently.

We chose to compare Blue Apron to Whole Foods and Kroger, as they represent some of the closest comparable public companies. 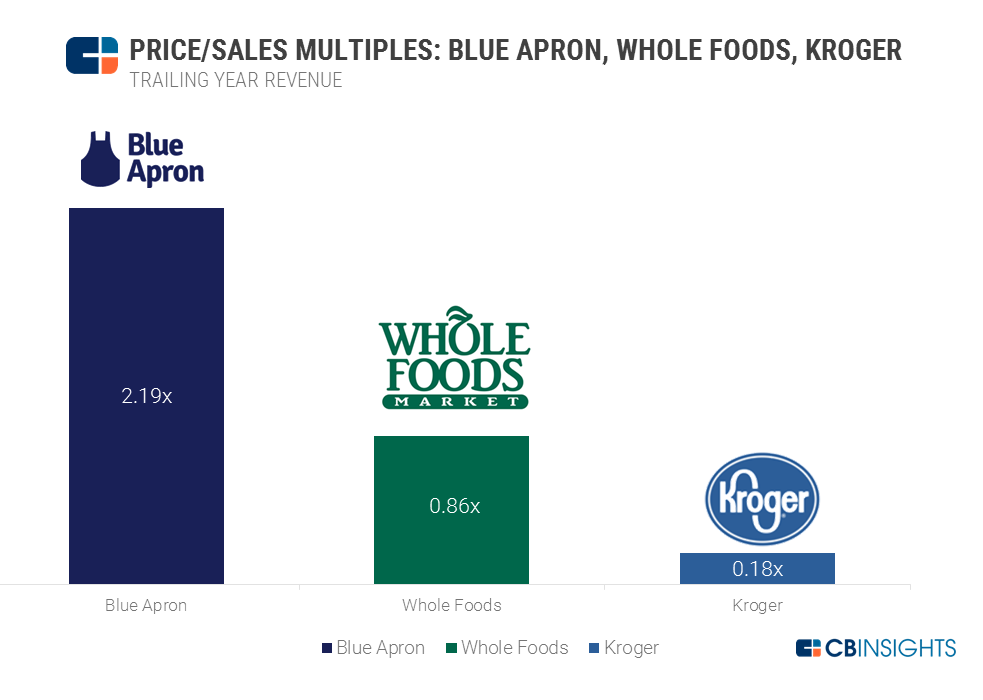 Because Blue Apron’s earnings show a net loss of $54.8M for 2016, we did not compare the companies on a price-to-earnings basis, and instead relied on trailing year price-to-sales. For Blue Apron, we calculated its multiple using its IPO valuation of $1.9B; for Whole Foods, we used its acquisition price paid by Amazon of $13.7B; and for Kroger, we used its most recent market capitalization of approximately $21.3B.

Looking at Blue Apron’s price-to-sales multiple, we can see that both Whole Foods and Kroger still offer a much cheaper ratio, even amidst Blue Apron’s drop in valuation.

We also chose to compare Blue Apron to HelloFresh on a price-sales basis due to similarities in terms of business model and product offering; both companies offer subscription-based meal kits which they deliver to their customers. 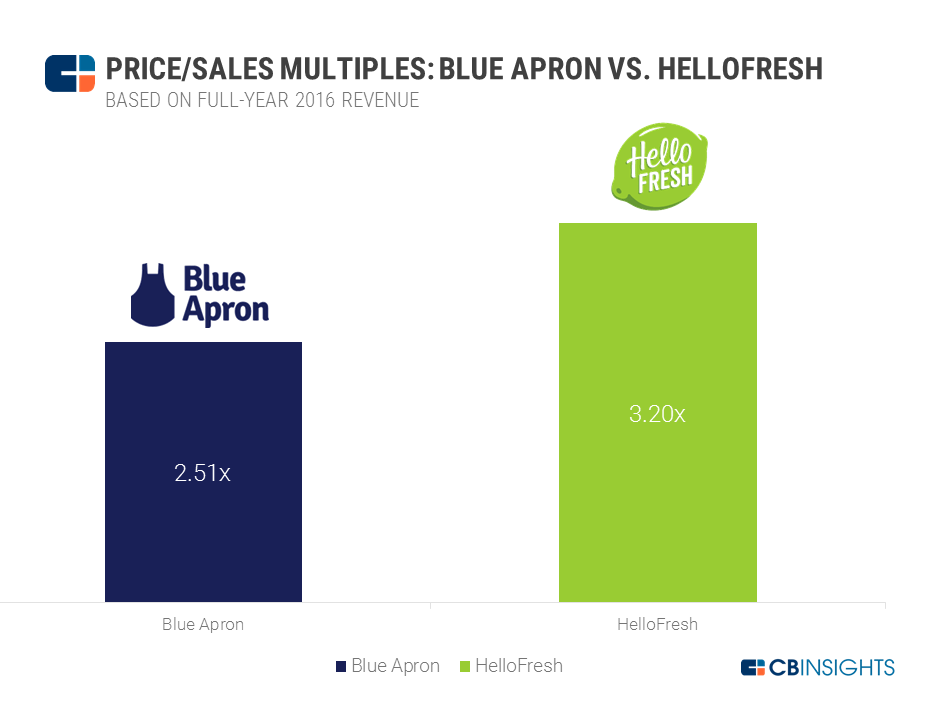 In this case we used 2016 revenue for Blue Apron and Hello Fresh to allow for a direct comparison. With a valuation of approximately $2B based on a mid-2015 round of financing, we calculated a 2.51x price-to-sales multiple for Blue Apron. $2B was its last private market valuation ahead of the end of 2016.

Blue Apron was cheaper than HelloFresh’s price-to-sales multiple of 3.20x, which is based on the company’s contemporaneous $2.09B valuation. For Blue Apron, 2016 revenue was $795.4M, an impressive 133% year-over-year increase from 2015 $340.8M. The company has significant costs however, including increasing marketing costs and discounting in the face of customer churn. Total operating expenses increased from $387.7M in 2015 to $850.2M in 2016.