Deal activity in 2014 YTD by 20 top VC firms including Sequoia, Greylock and Andreessen Horowitz has already surpassed the yearly totals of each of the past six years. We break down where the smart money is going.

According to CB Insights data, funding to digital health/health IT companies has already topped $2.2B in the first half of 2014.

With the space becoming increasingly crowded and well-funded, one effective way innovation trackers can understand which areas (and likely companies) will play a key role in future of the digital health space is by following the smart money.

Analyzing the digital health/health IT investment activity of 12 of the top venture firms as identified by our tech unicorn VC analysis and 8 other top tier firms based on our Investor Mosaic models, we analyzed where the smart money is going in digital health / health IT. Specifically, the VC firms whose digital health investments are analyzed include:

The data on their health IT / digital health bets is below.

Peeling back deal activity within the digital health/health IT market since 2008 by these 20 VC firms highlights that deal activity in 2014 YTD has already surpassed the yearly totals of each of the past six years. There have been 42 deals by the 20 firms through Aug. 26, 2014. Total deals by the 20 firms grew 167% in 2013 compared to 2010. It’s clear that smart money sees massive opportunity in the sector.

Select digital health and health IT companies that have raised funding from these firms so far in 2014 include Comprehend Systems, Better Doctor, Mango Health and Big Health. 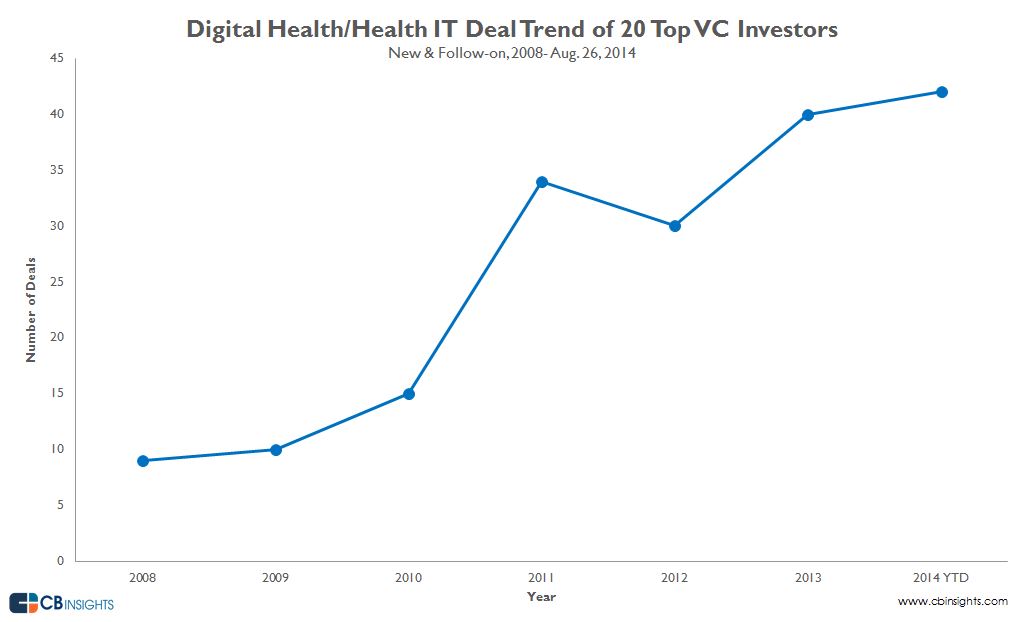 To better visualize the connections and specific areas the 20 VCs are investing within the digital health and health IT universe, we used the CB Insights’ Business Social Graph. Of the select investors, Kleiner Perkins, Founders Fund and Khosla Ventures have been most active in the ecosystem over the period.  Of the smart money VCs, Redpoint Ventures has not invested in the space. Despite the boom in NY digital health, Union Square Ventures has done just two deals in the space – the latest being Toronto-based medical photo sharing startup Figure 1 although based on recent posts by the firm’s partners, it appears the firm may get more active. 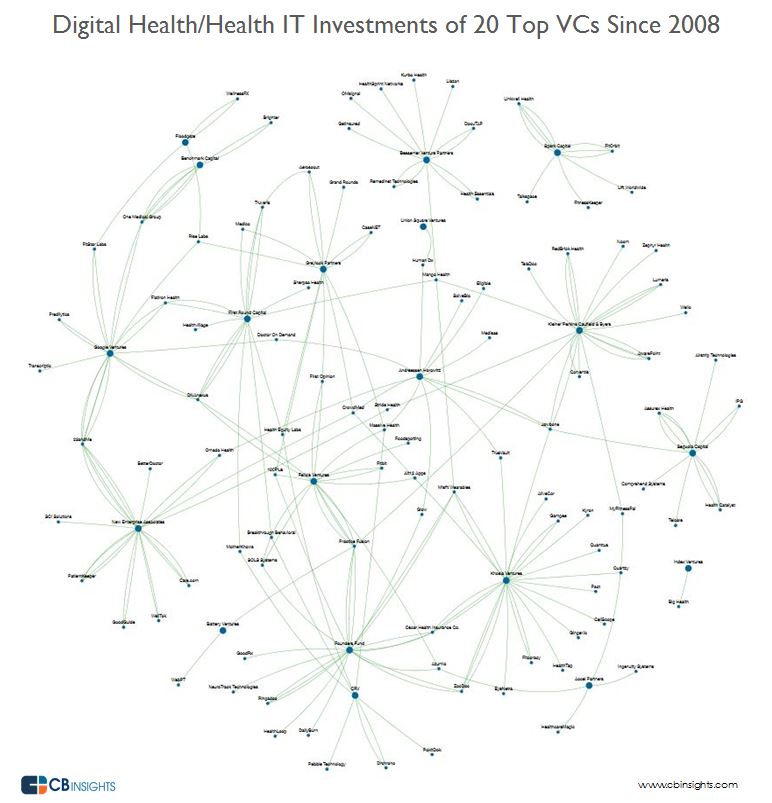 Within the digital health / health IT space, there are a few key areas where these brand-name venture firms appear to see the most opportunity for disruption. Analyzing the Business Social Graph, we found four markets that smart money VCs seem particularly keen on. These include

As both tech and healthcare corporations track the fast-changing landscape of digital health, following the markets and companies where smart money investors are focusing their attention is a great way to really see where disruptive technologies and business models are taking shape.

A list of the digital health/health IT companies in this analysis is available on the ‘Research’ tab, after logging in to CB Insights. Note: This research is only available to paid subscribers with access to CB Insider.

Want more data and analytics on the digital health space? Check out the CB Insights Venture Capital Database. Sign up free below.