New applications for blockchain, the distributed ledger tech that  underpins bitcoin, keep on to springing up across banking insurance, cybersecurity, and legal contracts.

(One recent legal innovation was the use of blockchain to create The DAO, an autonomous, crowd-funded, and decentralized corporation managed through blockchain, where stakeholders collectively vote on decisions, such as investments from its $100M in assets.)

With potential for transform industries ranging from education to auto sales to music, bitcoin and blockchain startups are proliferating. Using the CB Insights database, we looked at funding trends within the space.

The annual trends indicate a big 218% surge in funding in 2014 that was followed up by a more modest run-up in 2015. An all-time record in deals and dollars, 2015 represented 46% growth in funding and a 9% growth in deal volume over the previous year. 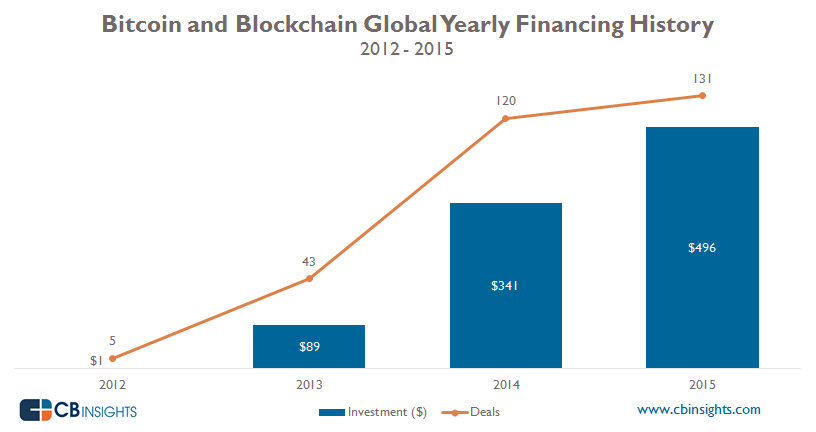 Drilling into the quarterly trends, we see that funding dropped off three quarters in a row right after peaking in Q1’15 at $224M (a quarter mainly boosted by 21 Inc‘s $111M Series C round). Funding plummeted to just $36M in Q4’15, but bounced back in Q1’16 in both deal and dollar terms.

Notable deals in Q1’16 included a $26M Series C to bitcoin exchange bitFlyer, the $55M Series A for smart contracts developer Blockstream, and a sizable $60M Series A round to Digital Asset Holdings, the bitcoin startup helmed by ex-J.P. Morgan banker Blythe Masters. 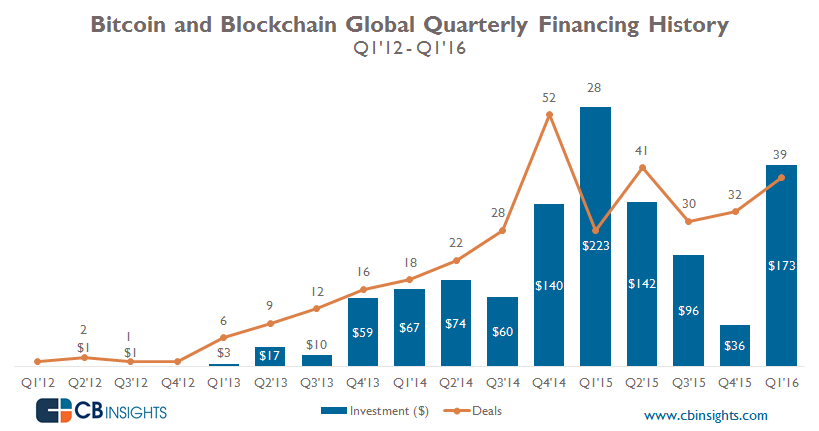 Want more data on bitcoin or blockchain startups? Log in to CB Insights, or sign up below.