Today, we’re talking about the most active investors in blockchain, the Otto Mafia, digital fitness, and more, including:

Peloton’s competitors are not who you think

The round values the company at $4.2B, up from $1.3B in May 2017. Peloton has now raised over $1B in funding. The company will use the capital to expand internationally to the UK and Canada, as well as to launch a new product: a $4K treadmill called the “Peloton Tread” that integrates on-demand workouts onto the treadmill screen, much like with the Peloton Bike, according to Fortune. 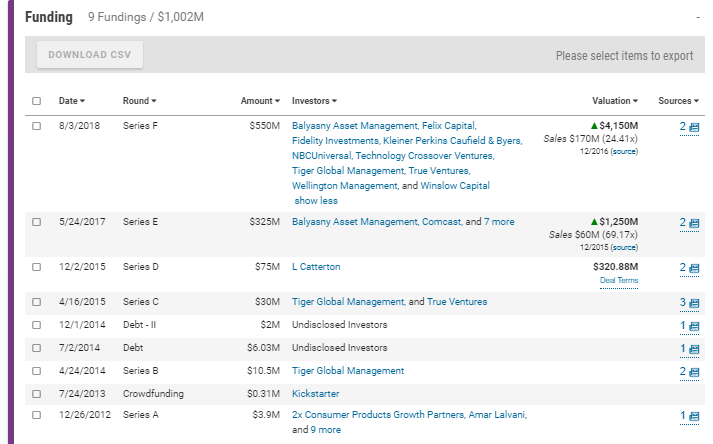 The company’s price/sales ratio remains a lofty 24.4x, but this is down significantly from the 69.2x multiple at the time of its last raise. The company expects to generate $700M in revenue this year, which would bring the forward multiple down to an even more reasonable 5.9x. Given its revenue growth and subscription business model, it doesn’t look insanely valued (relative to other unicorns).

With Peloton’s success, there are now a host of players trying to figure out a similar fitness-machine-meets-subscription-content play. Scooter Braun (who manages performers like Justin Bieber and Ariana Grande) announced a partnership with Rumble Boxing last week for a new JV called At-Home 360, to create fitness equipment that will stream Rumble digital training content.

Understandably, the competition for Peloton tends to focus on two types of players: