It’s no secret that everyone from small startups to major corporations is jumping on the blockchain trend.

As tech giants like Facebook explore blockchain as a means to reinvent themselves, startups are working on blockchain projects that could displace services like AWS (as with Filecoin) or loosen tech companies’ hold on personal information.

Now, in addition to transforming areas like data and payments, blockchain is shaking up traditional corporate structures. Through blockchain, companies could fundraise without stocks, operate without bank accounts, or pay employees without even knowing their names.

Could we soon see the creation of a completely ownerless company?

Below, we dig into how the blockchain-based company of tomorrow might take shape, from anonymous workforces to shared physical assets.

incorporating a company without stocks

Conventional wisdom dictates that startups should incorporate with taxes and stock options in mind. However, tomorrow’s companies might abandon this philosophy altogether.

“Blockchain companies, to build a community, only need an internet connection and a good regulatory environment… They’re open source groups that [manage internal funds in] straight crypto and might not even have traditional, terrestrial bank accounts.”

In other words, blockchain companies don’t need to adhere to a conventional management or financial infrastructure.

Ethereum, for example, raised funds through a public crowdsale, backs a free-floating token, and operates the Ethereum Foundation as a Swiss non-profit corporation. This means most of its value comes from sources that operate outside the legal bounds of traditional corporate structure.

Blockchain projects like Aragon are already specializing in this concept of digital incorporation. Aragon aims to create digital jurisdictions, where a community will act like an online court system for resolving disputes — effectively giving borderless projects a borderless legal system. 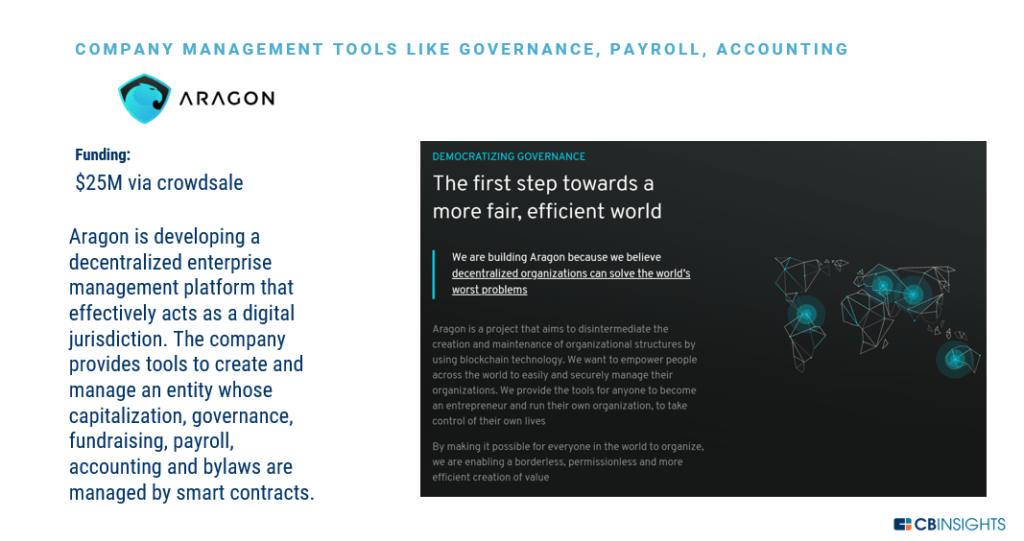 Given these early indications, tomorrow’s cryptonetworks might look more like a trust, which has no owner and simply provides a set of instructions for how to split up money.

Future blockchain-based companies might operate in a similar fashion, using a special legal system and denominating everything in their native token.

Clocking in at a centralized office is increasingly a outdated concept — and one that blockchain companies may easily get rid of.

“Blockchain companies are the most distributed companies in the world… Their developers are spread out, in some cases they’re fully anonymous, like even the team members don’t know who other team members are… There’s one that’s coming up [called Mimblewimble] where the developers use Harry Potter characters as names.”

This trend toward anonymity can be bolstered by geographic trends for blockchain companies. Many major projects have employees spread across the globe, or are headquartered in regulation-friendly financial zones like Switzerland or Singapore. Anonymity can be especially desirable for employees located in more strictly regulated locations.

Being anonymous and geographically dispersed can change the unspoken rules of corporations. Norms like decision-making based on seniority and other internal politics will not necessarily be intuitive. New rules may have to be written into companies’ software, rather than ingrained in their culture.

Blockchain companies like Colony are already thinking about solutions to help “open organizations” codify their voting, politics, and employee rewards. 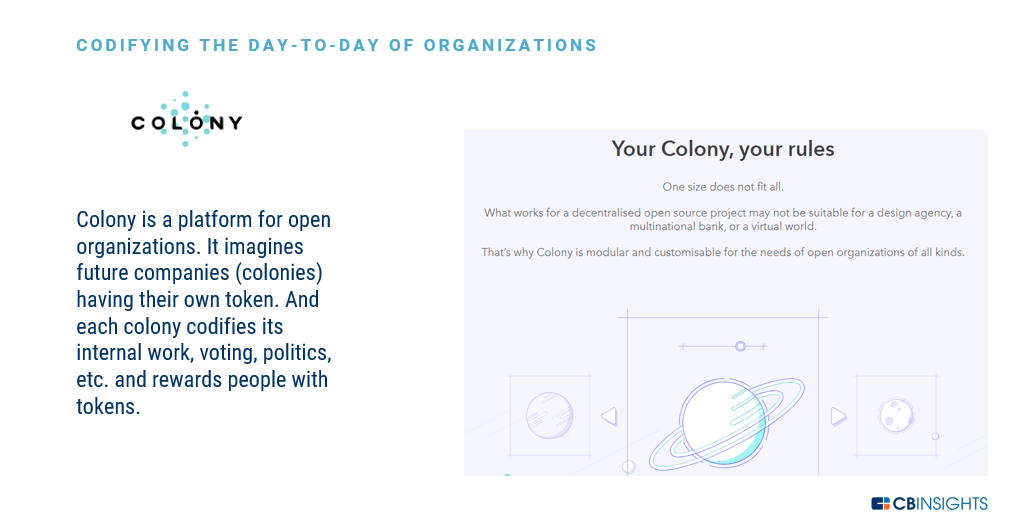 Today’s cryptonetworks are already modeling themselves after the sharing economy. For example, Filecoin and Golem offer peer-to-peer networks that incentivize users to lend out their computing hardware.

While at their current scale these companies pose a small threat, in theory Amazon’s AWS has blockchain-based competitors that lack the burdens of real estate, labor, and a profit motive for high margins.

Many cryptonetworks are already riffing on sharing economy-type business models that are “asset-light.” Soon, we could see more examples of this with hardware products.

Helium is pioneering a hardware device that provides wireless coverage. Users who buy the device can earn tokens for keeping it plugged in. Though widespread adoption, Helium could effectively kickstart a decentralized telecom, bypassing the need for capital-intensive mobile towers.

There may be even more ambitious projects down the line. Future cryptonetworks could crowdsource purchases of machines, real estate, labor, and more.

Twenty years ago, few people might have predicted that open-source code would be the basis of some of the most valuable projects in the world.

Today, startups like code manager GitHub or Databricks’ Spark platform have shown that open-source can see widespread adoption. And new cryptonetworks are using open-source code as a basis for mass-coordination and unprecedented new business models.