In the energy industry, blockchain applications are growing increasingly common. The blockchain ledger is being used to reduce transaction costs, pinpoint origins of energy, and increase the efficiency of exchanges.

We used CB Insights data to identify the small – but growing – cohort of startups applying blockchain to the energy industry. We’ve also outlined initiatives taken on by large companies and governments. 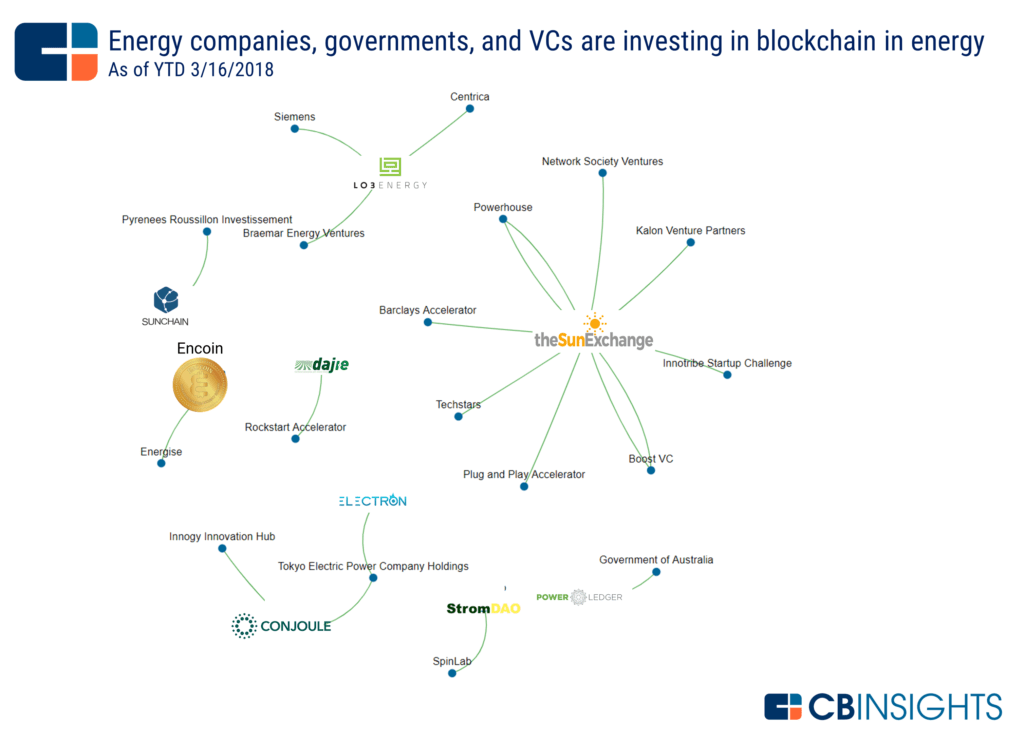 The majority of blockchain energy projects are focused on peer-to-peer (P2P) energy marketplaces.

In Brooklyn, a partnership between LO3 Energy and Siemens has established the Brooklyn Microgrid, which allows customers to buy and sell energy to their neighbors via the blockchain. This means they don’t need to go through the utility, which is the central grid that provides electricity to most American communities. Instead, those with energy-producing sources, like solar panels, can sell their unused energy to their community.

P2P energy sales have a few advantages. They can be cheaper than buying electricity from the grid.

In NY, utility charges include several fees — property and sales taxes, the maintenance of wires and substations, covering costs that your provider may have paid for the electricity in wholesale markets. Consumers who are producing energy — like those who have solar panels on their roofs — are required to sell any energy that they haven’t used back to the grid.

P2P energy sales also open up the possibility of distinguishing where energy is coming from — renewables, coal, oil, and gas — which allows consumers to choose renewable energy, for example. Traditionally, grids generally measure electricity as net amounts and don’t allow consumers to pick and choose.

Customers can support renewable energy even if they don’t have the technology to produce it. If a neighbor is using solar panels, for example, the Brooklyn Microgrid provides a way to buy off their surplus electricity.

Conjoule, which has raised funding from Tokyo Electric Power Company Holdings (TEPCO) and Innogy Innovation Hub — a subsidiary of German energy and gas provider RWE — allows users to sell off unused solar energy on its platform. Transactions will be recorded on the company’s blockchain platform.

The Sun Exchange expands the P2P marketplace model beyond local communities, allowing users to buy solar panels in sunny parts of the world and lease them out to customers. One of its projects is in Knsyna Elephant Park in South Africa, where it’s already sold out 60kW of solar panels. It only begins installing solar panels once it’s sold out everything involved in its project.

The company has raised several rounds of early-stage investment, including accelerator backing from Plug and Play Accelerator, Techstars, and Barclays Accelerator.

Other companies are utilizing blockchain to improve on antiquated technology in the industry.

Electron is developing a blockchain platform that will improve flexibility in the energy industry. For example, it’s pioneering a product that lets consumers switch easily between providers, a process that is currently expensive and time-consuming.

Power Ledger tokenizes the P2P energy marketplace, allowing global customers to pay each other via its coin. It has raised $34M separately in its initial coin offering and has also received an $8M grant from the government of Australia.

However, many cryptocurrencies are taking it a step further, attempting to offset the environmental impacts of mining tokens by incentivizing energy production.

Encoin, for example, provides rewards for generating distributed energy and storing it. The company has received traditional backing from Energise, KPMG’s accelerator for Australian energy and natural resources.

Not displayed in our business social graph above are several cryptocurrency companies that have either not raised money or raised it through non-traditional sources of financing, like initial coin offerings (ICOs). Many of these operate within the energy industry.

SolarCoin rewards solar energy production with cryptocurrency. It can be converted into Bitcoin as well as fiat cash like dollars. In 2017, the company estimated that there were roughly 20 to 30 years of solar production left before the coin was entirely mined. As of 3/16/18, SolarCoin was worth ~$0.36

South Africa’s Bankymoon allows customers to fill prepaid meters through a cryptocurrency and only access energy when it’s filled. All transactions are recorded with smart contracts.

Other notable USE CASES

Grid Singularity is a blockchain developer. It has partnered with Colorado-based Rocky Mountain Institute to develop blockchain projects in the energy sector that can have commercial applications.

Together, the duo have started the Energy Web Foundation. It is a non-profit organization that has partnered with multiple energy companies, including Duke Energy, Centrica, Shell, TEPCO, and Germany’s Innogy. In November 2017, EWF rolled out its open source blockchain to allow developers to create tokens on. It has identified four places where it hopes to see blockchain inovation:  billing utilities, determining the origin of energy, meeting the demand of DERs (distributed energy resources that add power to or pull from grids, like solar panels or electric vehicles), and real-time price negotiation on grids.

Innogy, a subsidiary of German energy and gas provider RWE, has launched charging stations across Germany that connect to ethereum’s public blockchain. Once a user registers his car, he can transfer regular cash into his wallet. From there, any time he hooks up to a charging station, ethereum’s blockchain will move value to the owner of the charging station and record the transaction.

There’s still some friction before this method of charging gains popularity. Cars will ideally be “blockchain-ized,” meaning that drivers can just move into the charging station and immediately have their wallets charged. That part of the technology isn’t there yet — but for those who wish to pay for their charging transactions in Germany, the ethereum wallet is an option.

In March 2018, Chile’s government made news for allegedly announcing its intentions to utilize blockchain in its national grid. The technology will help check that energy sources are compliant with renewable energy laws and will measure energy prices against average market prices.