We analyzed mentions of bitcoin on Techmeme, Techcrunch, Re/code, GigaOm and other media outlets to see how coverage has trended with bitcoin's price.

Former hedge fund manager, Andy Kessler, penned a post last week with the provocative title “Amid Bitcoin’s Bloodbath, Silence from Silicon Valley Press”. The crypto-currency peaked at $1242 in Nov 2013 to around $201 recently, and according to Kessler , there was a lot of media attention on the way up but relative silence since.   He takes issue with this, writing:

Barry Silbert’s stake is now worth $10 million – down 43% in a rotation of the moon. My point is less about the epic FAIL of their at the time hyped Bitcoin investing prowess. Jeez, we all make mistakes. No, my beef is more about the coverage.

So we wanted to test Kessler’s claims. A little data analysis using python with scipy and our news archive shows that there is definitely less coverage of bitcoin.  It is also highly correlated with Bitcoin’s price (Pearson’s r = 0.9).

First, we plotted bitcoin’s price vs Techmeme mentions of bitcoin. Techmeme, for those unfamiliar, is a news aggregation site that curates (algorithmically and with a team of editors) the biggest tech related stories of the day. It is a good proxy for overall tech coverage of a topic.  As the graph below illustrates, Techmeme mentions of bitcoin have followed pricing very closely. (note: bitcoin pricing was from Coindesk’s Bitcoin Price Index)

The correlation coefficient which measures strength of variables’ linear relationship stands at 0.78 with a p-value well under 0.05, indicating a strong positive relationship between the price of bitcoin and its overall coverage in the tech press. The relationship is is highly unlikely to be coincidental. 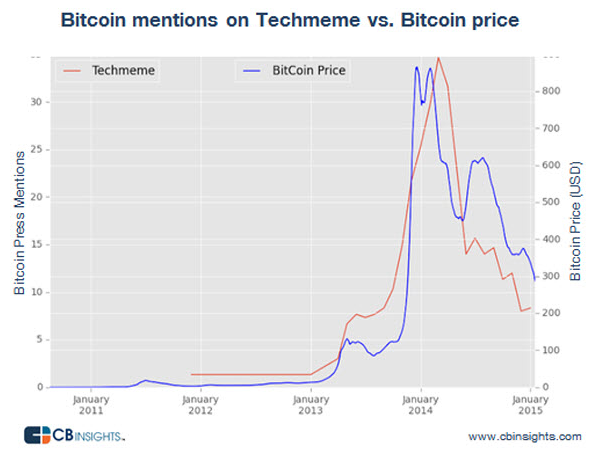 We then looked at some of the most popular media outlets for tech coverage, including several that Kessler highlighted in his article as well as a few others.  These includes Pando, TechCrunch, Re/Code, Venturebeat, Business Insider, GigaOm and Forbes.

The graph below highlights the bitcoin mentions by individual media outlet vs bitcoin price.

Among these outlets, there are various degrees of correlation as detailed by the coefficients below, all of which have statistically significant p-values. Some outlets’ coverage have shown a strong positive relationship with price (TechCrunch and Forbes notably).  At the opposite end of the spectrum is Re/Code whose coverage of bitcoin is uncorrelated with bitcoin’s price.

Some thoughts on what it all means

Kessler’s argument that bitcoin coverage has decreased is borne out by the data. Of course, correlation doesn’t imply causation so it’s uncertain if media hype drove the higher prices or if the climbing price is what drove additional media attention.

Having observed similar trends in other industries, the rise in sentiment in a space or industry (or price in this case) is often a driver of media attention as people & organizations are seeking out media attention for their seemingly prescient bets (translation: more press releases get issued). If those markets and those bets don’t go as expected, efforts to gain media attention diminish. In other words, nobody brags about their bets and products that don’t pan out. As a result, this means less stories on the topic get pitched to media outlets which drives less media chatter.

Despite falling media attention, investors have clearly remained bullish on bitcoin with investment into related startups hitting a record, collecting over $400M. These figures were prior to Coinbase‘s $75 million raise by NYSE, DFJ Growth, USAA, Union Square Ventures, Andreessen Horowitz and Ribbit Capital.  In addition to media coverage, it will be interesting to see if investor activity shows signs of slowing with bitcoin’s price under pressure.

What do you think is driving media coverage (or the lack thereof) of bitcoin? And do you see bitcoin investment increasing despite bitcoin’s price? Let us know in the comments.