2016 saw only 5 top investors participate in 8 deals, the lowest number since investment to the sector first began.

Since early in bitcoin funding history, top venture capitalists — our “smart money investors” — have been notably active in financing to bitcoin and blockchain startups.

Our definition of bitcoin and blockchain companies includes cryptocurrency-focused companies involved in the trading, storing, or usage of cryptocurrencies — primarily bitcoin — and companies developing industry-specific applications of blockchain technology. At the most basic level, blockchains are cryptographically secured, distributed ledgers, first developed as the underlying infrastructure of bitcoin. For more information on our classifications and definitions, see our bitcoin and blockchain market map.

Please see the explanation and full list at the bottom of this post of our 24 “smart money VCs.”

The total dollar amount of financings where smart money investors participated fell as well, from approximately $295M in 2015 to $212M in 2016, a 28% decline. In contrast, total bitcoin and blockchain dollars from all investors rose year-over-year, from approximately $524M to $550M. 2015’s smart money dollar total were buoyed in large part by 21’s $111M Series C — the largest bitcoin and blockchain financing to-date — in which smart money VCs Khosla Ventures and Andreessen Horowitz participated. 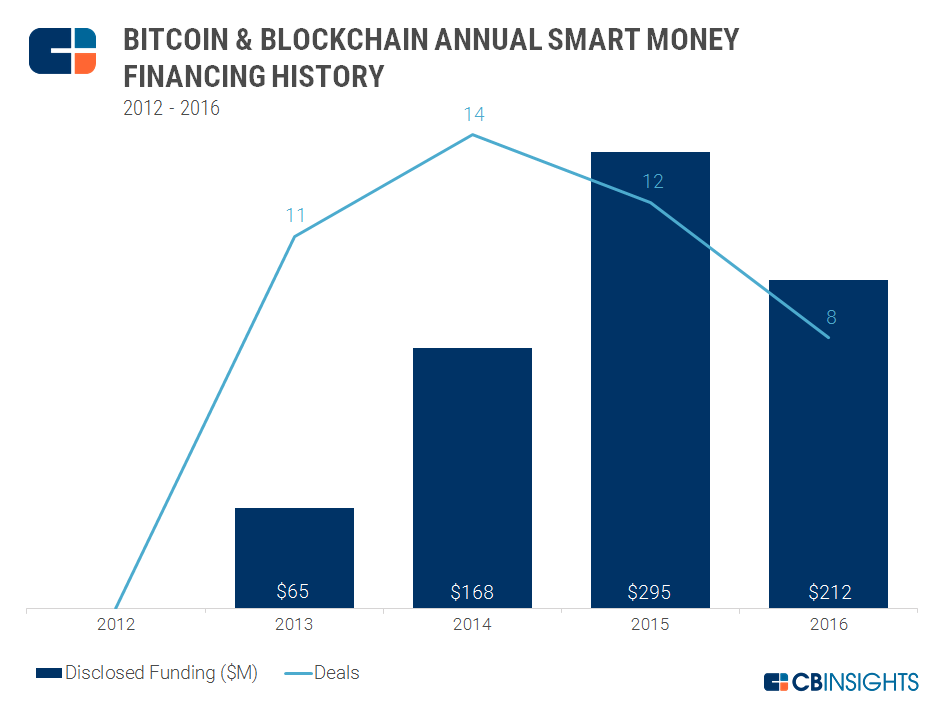 Q2’16 was the year’s best quarter for smart money investors, with three financings totaling $71M. Circle Internet Financial took the bulk of funding, with a $60M Series D, in which General Catalyst Partners invested, after previously participating in the company’s $9M Series A, $17M Series B, and $50M Series C. Accel Partners invested at three earlier stages, but did not invest at the Series D round.

While 2016 saw the lowest number of smart money investments, average dollars per financing have increased, from $12M in 2014 to about $27M in 2016. Combined with the sector’s first Series D in Q2, as mentioned above, this data indicates a maturing sector. 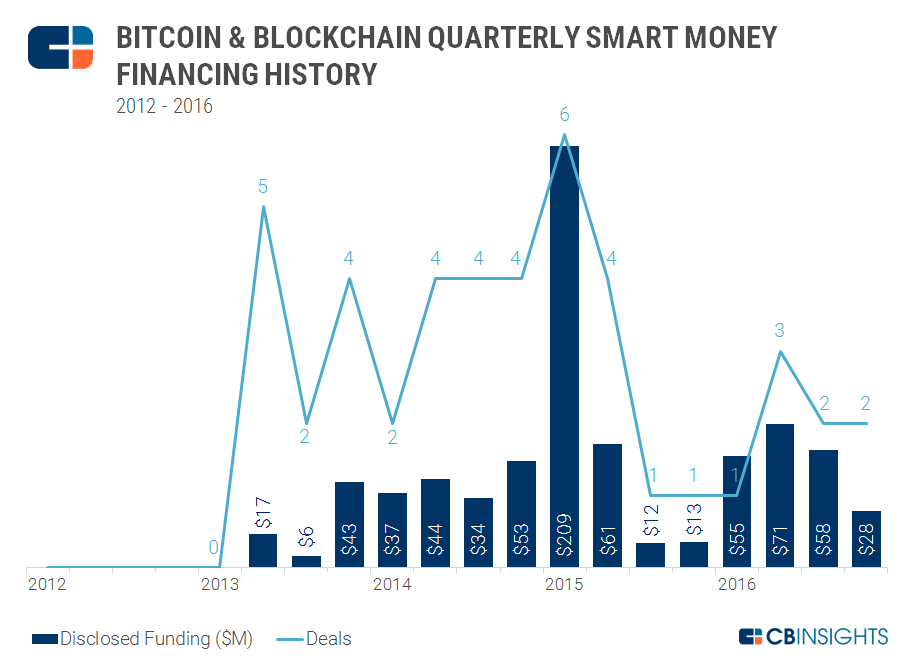 As noted, smart money investors charted a similar course, with deals falling to their lowest levels. In addition total funding dollars dropped by 28%. 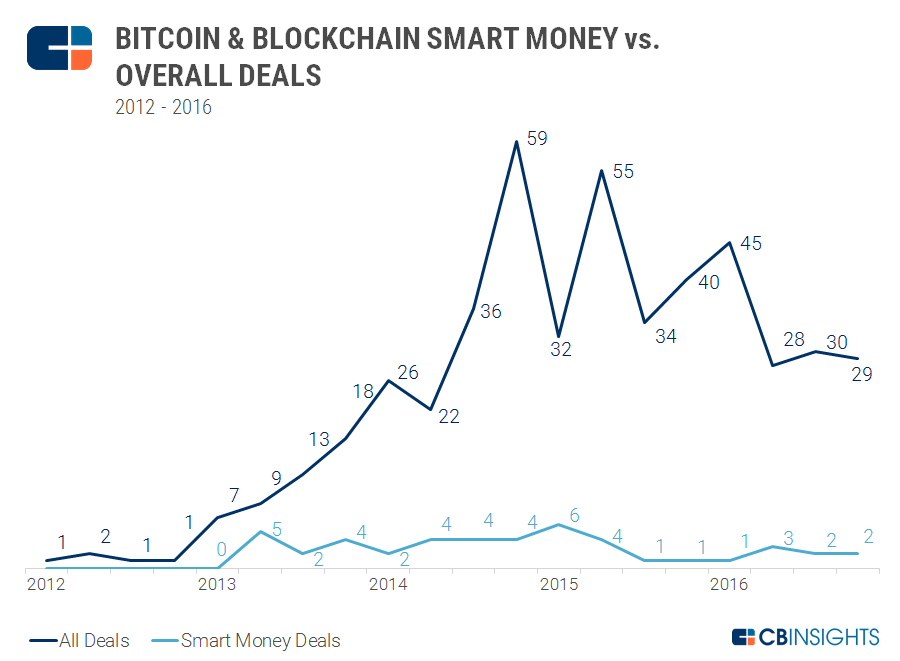 We used CB Insights’ Business Social Graph to visualize how smart money VCs and the bitcoin and blockchain companies they invest in are related. 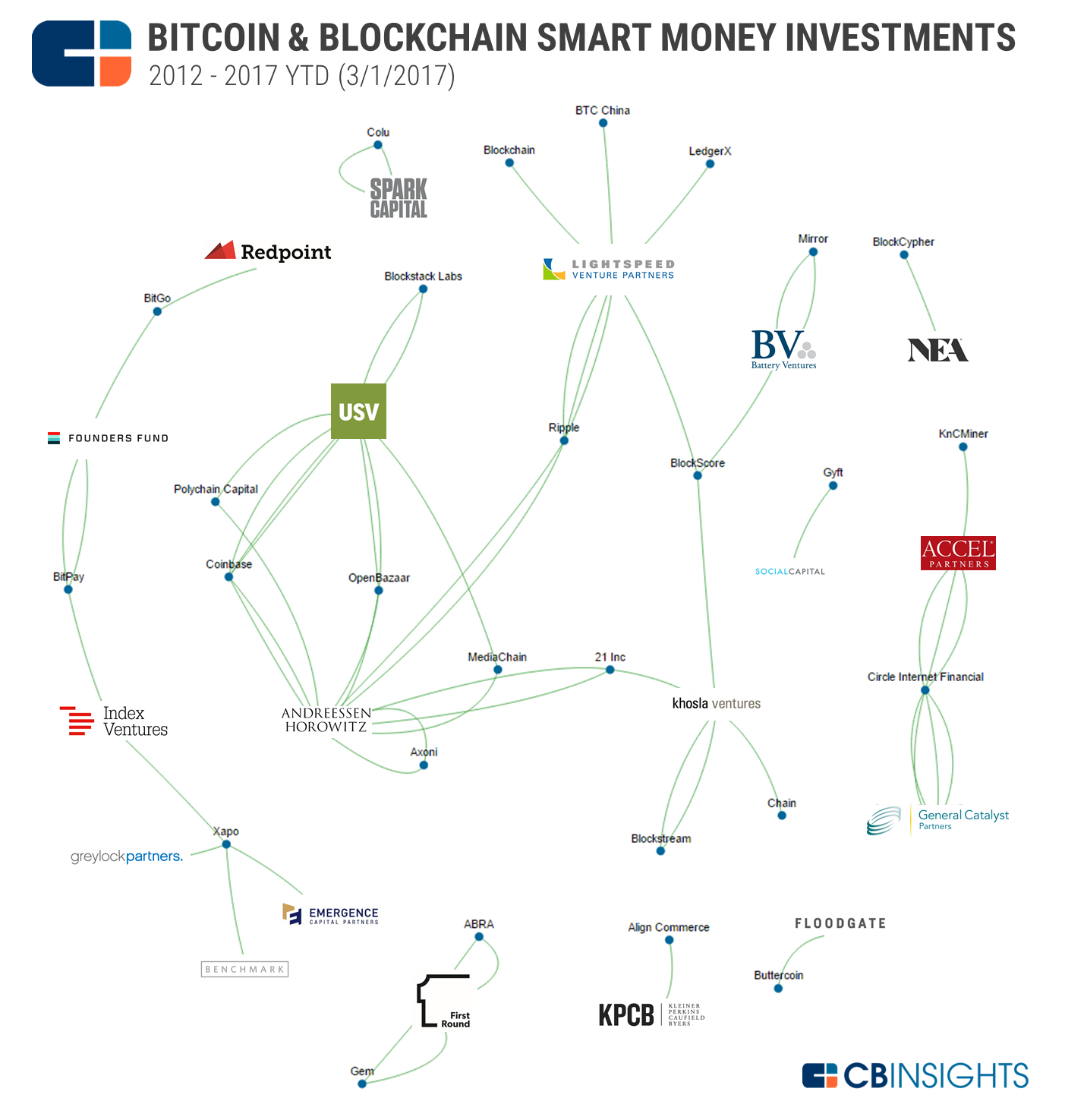 Here are some takeaways from the Business Social Graph: