Bitcoin and blockchain companies are popping up in numerous sectors, including financial services, social, intellectual property, and IoT.

Bitcoin and blockchain may be moving beyond buzzword status.

Funding to the sector has gone from almost no investment in 2012 to over $500M in each of the past two years. Corporations and their venture arms, especially those in financial services, have entered the fray in large numbers, looking to blockchain and distributed ledger solutions to address pain points that include data reconciliation, clearance, and settlement, among other issues. Major global banks and financial intermediaries are working closely with blockchain companies using the new technology to revamp legacy systems and infrastructure.

We used the CB Insights database to identify 95 privately held bitcoin and blockchain companies and organized them into ten categories, based on each company’s primary product, line of business, and/or use case.

Our market map includes both bitcoin and blockchain startups. Blockchains are cryptographically secured, distributed ledgers, first developed as the underlying technology for the bitcoin cryptocurrency. Bitcoin companies offer products or services related to the trading, storing, or usage of bitcoin, while blockchain-based companies develop solutions that apply blockchain technology across sectors and verticals.

Please note companies often straddle multiple categories. We categorize each company based on its primary use case or most apparent line of business. Bitcoin and blockchain consortia are not included on this market map. 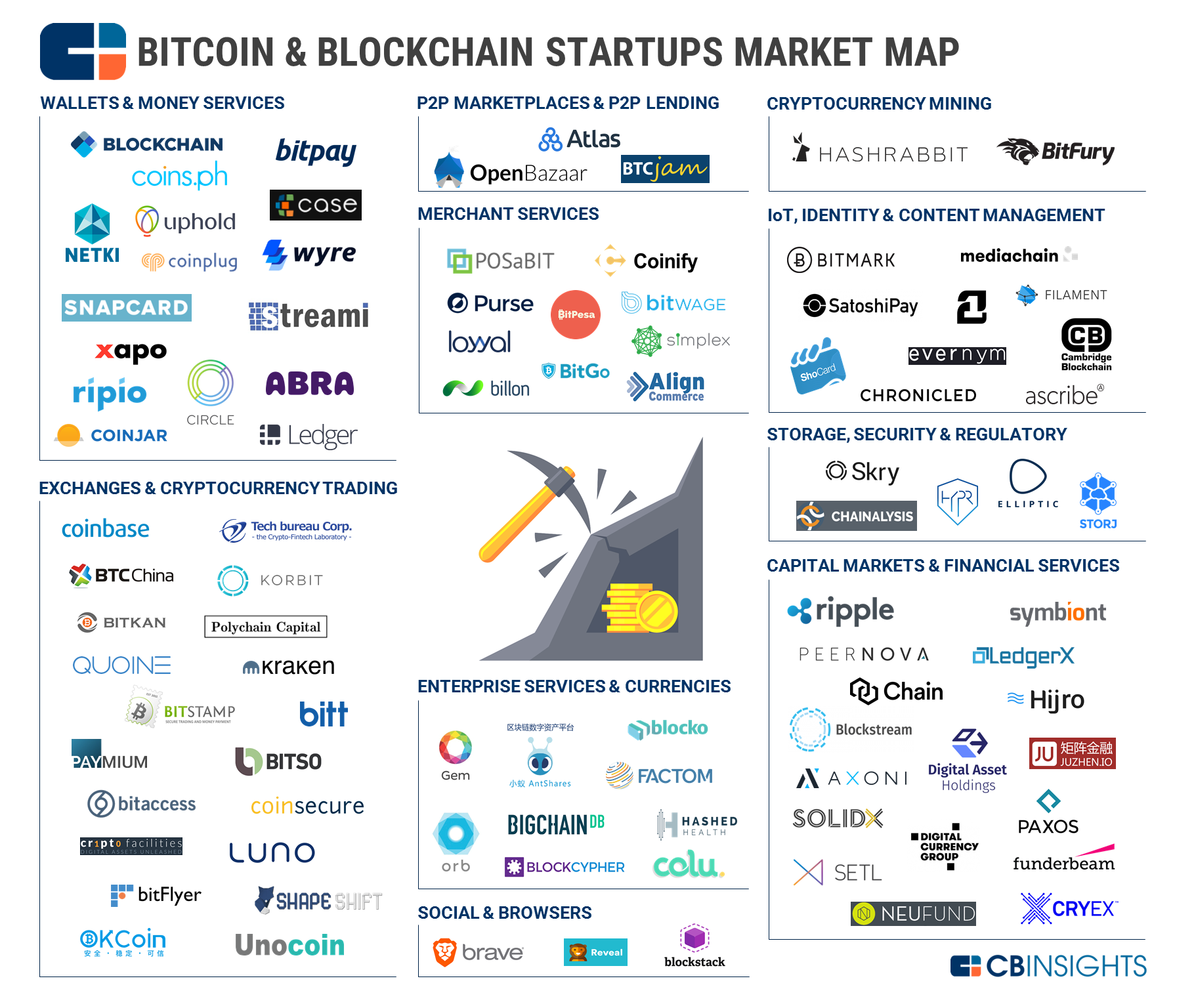 P2P Marketplaces & P2P Lending: P2P marketplaces primarily operate blockchain-based, peer-to-peer marketplace platforms, where users can exchange goods directly and without the use of an intermediary. P2P lending refers to companies that develop blockchain-based, peer-to-peer lending platforms which allow users to engage in lending transactions with peers, as opposed to traditional financial institutions. Atlas is developing a peer-to-peer mobile banking platform for geographies with limited or under-developed financial infrastructure, and has received $3M in three seed investment rounds. OpenBazaar, a bitcoin peer-to-peer marketplace that takes no middlemen fees, recently closed on a $3M Series A funding round that included Andreessen Horowitz and Union Square Ventures as co-investors.

Enterprise Services & Currencies: Blockchain services companies primarily develop blockchain operating systems, APIs, and protocols intended for multiple and varied use cases, or companies that act as general-purpose blockchain consultants, typically for enterprises. Blockchain currencies refers to companies that build unique and custom cryptocurrencies and tokens. Gem is building a blockchain operating system and API for the financial, healthcare, and manufacturing sectors, among others, and has received $10M in total funding from seed and Series A rounds.

Social & Browsers: Social companies primarily develop blockchain-based social networks. Browser companies primarily build blockchain-secured web browsers, often including microtransaction capabilities. Reveal is building a social network where advertisers pay users micropayments denominated in the company’s cryptographic currency for the right to advertise to those users, and has received $1.6M from the sector’s top investors by deal count, Digital Currency Group and Boost VC. Brave is taking a similar approach with its web browser, allowing users to pay content providers and publishers through micropayments as an alternative to advertising, and has raised $7M in two rounds.

Cryptocurrency Mining: Mining equipment & services refers to companies that primarily build or operate hardware, software, cloud-based pools, and other services for the mining of cryptocurrencies. Miners receive financial renumeration from cryptocurrency networks for maintaining the networks. Netherlands-based BitFury Group sells and develops hardware and software for cryptocurrency mining in addition to consulting for enterprises and governments in implementing blockchain solutions. The company raised the largest round of 2017 thus far, a $30M Series C from first-time sector investor, China Credit Limited Holdings.

IoT, Identity & Content Management: IoT companies primarily assign physical assets blockchain-secured digital signatures and establish trusted networks by which these physical assets can communicate. As an example, an IoT-connected shipment could move from point to point, with package information continuously updated on a secure blockchain shared by all interested parties. Identity companies primarily build identity management applications for consumers to record and secure identification data. Content companies primarily operate blockchain-based content platforms, whereby publishers and creators establish immutable rights and ownership of content and engage in microtransactions for the usage of content. These three subcategories are grouped together because they append digital signatures for physical objects and unique content to the blockchain. Ascribe offers a blockchain platform where creators can keep full and attributable control of assets while sharing or selling them, and has raised $2M in seed funding.

Capital Markets & Financial Services: Capital markets & financial services refers to companies that primarily develop solutions for financial institutions and intermediaries to address issues of clearance, settlement, and data management, among others, as well as to companies that build new blockchain-based investment vehicles. Funderbeam has created a blockchain-based platform for the trading and funding of shares of private companies, and has raised $4.6M in four seed rounds, the last of which included Draper Associates. We also include investors such as Digital Currency Group in this category because the company acts as both an investor and developer of blockchain and cryptocurrency applications, including operating Genesis Trading and the Grayscale Bitcoin Investment Trust.