While the US accounts for 55% of bitcoin and blockchain deal share, other global players are entering the sector in increasing numbers.

One of the key features of bitcoin and blockchain is that the technology allows people to transact more easily and safely across borders, without the need for currency conversion or other middlemen. In keeping with the global utility of the cryptocurrency, we are seeing increased interest abroad in bitcoin and blockchain tech.

Bitcoin and blockchain companies from 43 countries have received $1.55B in equity funding since 2012 through 02/14/17. The US dominates in terms of both deals and dollars, with US-based bitcoin and blockchain startups bringing in $1B across approximately 270 rounds since 2012, and accounting for 55% of total deals to the sector.

Looking beyond the US, the UK accounts for 6% of total deals over the same period, Singapore for 3%, Japan, South Korea, and China for 2% each, and the remaining 37 countries for 29% combined. 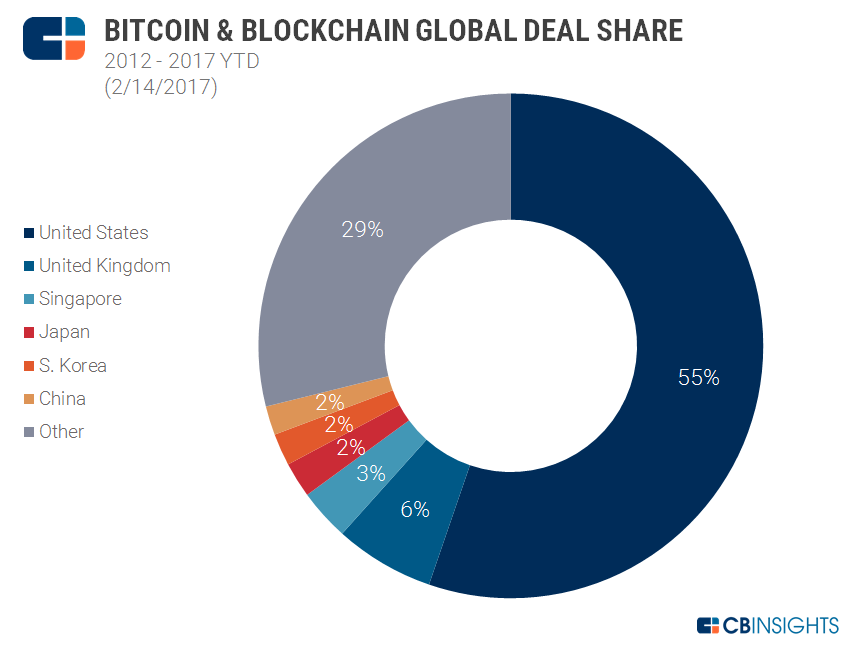 Dollar distribution shows a different breakdown, with the UK falling to fourth place behind the Netherlands and Japan. Netherlands-based BitFury Group has received $90M in funding since 2012 while Japan’s cryptocurrency exchange bitFlyer has received $36M, making these two companies among the most well-funded bitcoin or blockchain startups outside the US.

For our map, we identified countries outside the US that have seen financing to bitcoin or blockchain companies since 2012. Of those 42 countries, we narrowed our list down to 23, and identified some of the most notable and well-funded companies operating in each. 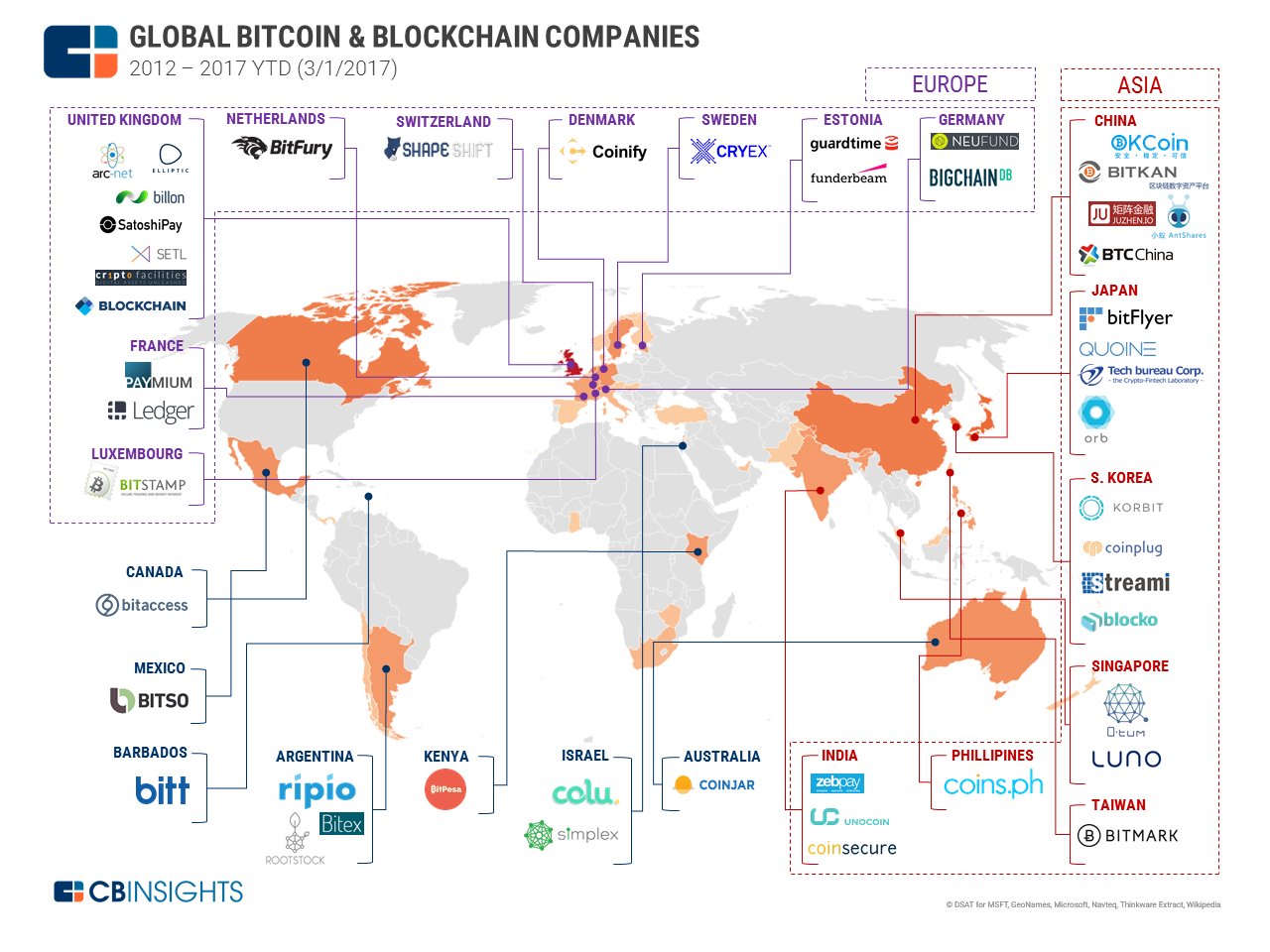 United Kingdom: As noted, the UK has seen the most financings of any country outside the United States. Four deals have closed since the start of 2017, on track to surpass 2016’s total of ten deals. The most well-funded UK company remains Blockchain, a cryptocurrency wallet and money services platform that received $30.5M in Series A funding from Lightspeed Venture Partners and Sir Richard Branson, among others. Another UK company, SETL, has received significant media attention after Deloitte announced it had acquired a minority stake in the capital markets and financial services blockchain company.

Singapore: While Singapore-based bitcoin and blockchain companies have closed on 16 investment rounds since 2012, activity in the country has tapered off significantly, with companies failing to close on a single round in 2016. In 2015, Luno, a cryptocurrency exchange formerly known as BitX, closed on the country’s largest financing round — a $4M Series A that included Digital Currency Group and Naspers as investors.

Netherlands: Bitfury Group, a Netherlands-based company that specializes in cryptocurrency mining and enterprise blockchain services, closed on $30M in Series C funding from first-time investor China Credit Limited Holdings in the largest financing round of 2017 thus far. The company has raised $90M in funding since its Series A in 2014, and accounts for the vast majority of total dollars to the Netherlands’ nascent bitcoin and blockchain startups.

China: 2016 provided a much-needed boost to Chinese bitcoin and blockchain companies, which saw just one 2015 venture investment to cryptocurrency exchange and trading platform BitKan. In late 2016, capital markets and financial services company Juzhen Financials closed on a $23M Series A in which Fenbushi Capital, a China-based blockchain-focused VC firm, participated. The second largest financing round went to Antshares Blockchain, with $4.5M deployed to assist the company in building open-source blockchain protocols for the digitization of assets and financial shares.