Research Brief
3597
Subscription boxes focused on snacks and leisure activities have taken deal share from beauty boxes over the past several years.

The subscription model has given birth to a number of big-name startups. Birchbox, an early entrant, raised its first equity funding in 2010 to send subscription boxes of curated, sample-size cosmetics, letting women experiment with different makeup products. JustFab, which first attracted investment in 2011 with its women’s apparel and accessories subscription boxes, achieved unicorn valuation by mid-2014. Dollar Shave Club, which investors first funded in 2012, was acquired earlier this year by Unilever at a $1B valuation.

We focused our analysis on first fundings only, to highlight the rise of new subscription startups over time, and eliminate noise from companies that raised numerous funding rounds. It does not include debt, but does include incubator/accelerator rounds. We did not include subscriptions of perishables, like Blue Apron, or for services or experiences, like Classpass.

Below, we look into the number of first fundings by product category in absolute terms. We can see that overall, the number of newly funded subscription startups has fluctuated. Investors backed 28 new subscription startups in 2013, but just 7 in 2014. However, that number has begun to climb again, to 20 in 2015 and 28 in 2016 year-to-date, a run-rate that would lead to a record high for first fundings this year.

In both of these peak years — 2013 and 2016 — the snacks & beverage category led the way. This year, in fact, 12 snack & beverage subscription startups have already raised first funding rounds, at least twice the number of any other segment. We also see growth in the leisure segment, which saw more first fundings in the first ten months of 2016 than it did in any full year before. Beyond Loot Crate, mentioned above, the first fundings to Leisure subscriptions in 2016 encompass everything from Cairn, a curated box of snacks and gear for outdoor enthusiasts, to Robb Vices, which ships curated luxury items such as fancy liquors and chocolates or high-end headphones. 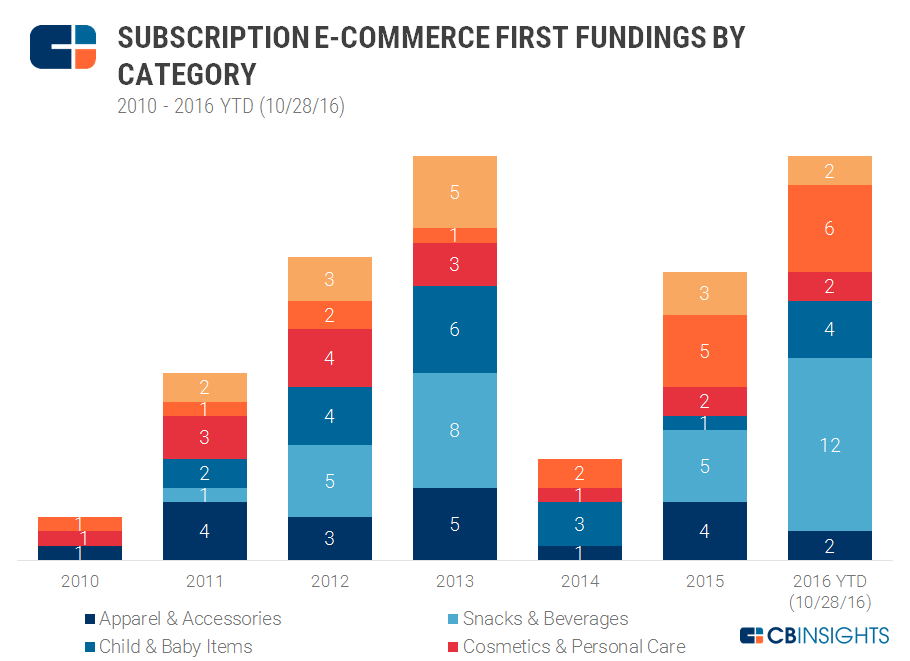 Investors back a wider range of subscription startups

As the chart below shows, new subscription startups have diversified their product focuses over time. In 2010, investor-backed subscription startups had limited scope, but by 2012 we already saw significant diversity across six product categories. Since then, our data shows clear growth in share to food & beverage and leisure subscriptions, along with the emergence of child & baby boxes. On the other hand, fewer startups are raising first fundings to offer apparel, accessories, or cosmetics.

In 2010, investors only funded three new subscription startups: Birchbox, which offers makeup; Manpacks, which offers men’s apparel and accessories; and BeachMint, which collapsed in 2015 after raising over $73M, but which promised to let celebrities curate boxes of items of interest for their fans. In 2011, we saw a greater range of options, but new entrepreneurs still focused most heavily on apparel & accessories (31% of first fundings) and cosmetics & personal Care (23%). 2011 also saw the sector’s largest ever first funding, which went to an apparel subscription — a $33M Series A to JustFab.

By 2012, subscriptions for snacks and beverages (coffee, beer, or wine) rose to 24% of first funding rounds, from zero in 2010. The segment attracted small deals, such as Craft Coffee’s <$1M angel round, and healthy snacks subscription NatureBox’s $2M seed round. We note that 2012 also brought initial investment to cosmetics subscription Ipsy (which by 2016 boasts a larger total funding amount than Birchbox, $103M to $87M) and to Dollar Shave Club. Dollar Shave Club attracted an impressive array of seed investors, including smart money firms Andreessen Horowitz, Kleiner Perkins Caufield & Byers, and Forerunner Ventures.

Investors did not fund any new snack and beverage startups in 2014, but the segment represented 25% of first fundings in 2015 and a record 43% in 2016 year-to-date. In 2016, newly funded snacks & beverage startups included organic snacks box Naturalbox, artisan ingredients box Hamptons Lane, coffee subscription Sudden Coffee, and others.

In 2016 to-date, several startups attracted particularly large first rounds. Loot Crate, which delivers curated boxes of “geek gear,” raised an $18.5M Series A (included here in the leisure category), while FlowerPlus, a Shanghai-based bouquet subscription service (included in the Other category), raised an $11M Series A. These two deals, as well as the $33M Series A to JustFab in 2011, dwarf most other deals on this list — the median size of the full list of first fundings to subscription startups was under $1M. 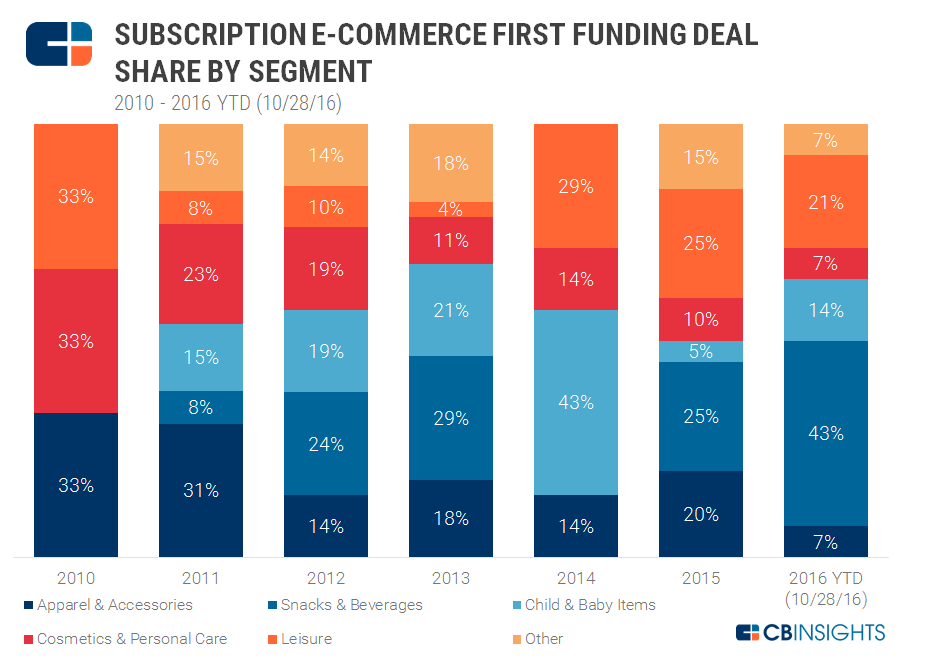 Want more data on funding to e-commerce startups? Login to CB Insights or sign up for free below.