Research Brief
1668
There are 53 private tech companies valued at over $1 billion in the US. Sequoia Capital, Accel Partners & Khosla Ventures look well positioned to be winners in the billion dollar club.

The US billion dollar valuation club (private companies worth $1 billion or more) currently has 53 companies in it. If these companies all deliver upon their lofty valuations, which investors stand to gain the most? We used CB Insights data to dig into the investors behind the billion dollar club.

From the data, we see that Sequoia Capital has invested in the most US unicorns with 13 portfolio companies valued above billion dollars. Kleiner Perkins comes in second with investments in the likes of Slack, and Snapchat. There are 8 investors that have at least 8 portfolio companies valued above a billion dollars. The list includes not just VCs but Goldman Sachs and T. Rowe Price and hybrid hedge fund/venture capital firm Tiger Global which has increasingly shifted its focus to Asia. The diversity of top unicorn investors highlights the ascent of a new class of hedge fund, mutual fund, investment bank and private equity investors clamoring to get into high flying tech companies. 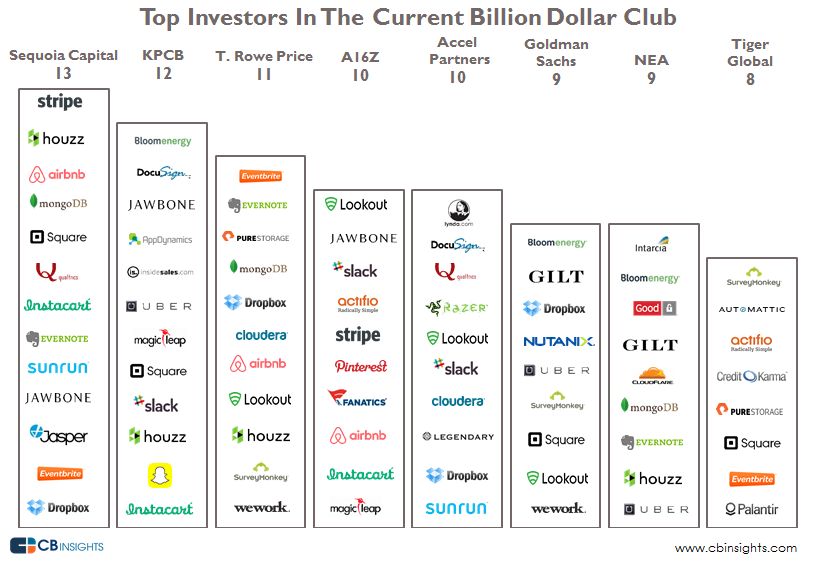 Of course, an investment into the most unicorns doesn’t tell the full story as the stage when an investor (especially a VC investor) first invested in a company is an important driver of returns. Investing late into a company that has already been declared a winner is very different than having the prescience to invest early.

Who invests early in tech’s unicorns?

So using CB Insights data, we mapped out the investors which first got into unicorns early (seed or series A stage). Again, Sequoia comes out on top as 6 of it’s 12 prospective unicorn investments came at the Seed / Series A stage. These included Stripe, AirBnB, and Instacart. Interestingly, Sequoia Capital seems to have an inside position on Y Combinator’s unicorns.

Accel Partners also invested in half of its unicorns early as well. Khosla Ventures made 5 of 7 of its unicorn bets at the early stage.

Below is a list of the VC investors that have at least 3 billion dollar private unicorns, as well as the number they invested in at a Seed/Angel or Series A round.

Other things to note:

There is an increasing amount of logo chasing going on these days as folks like Glenn Solomon of GGV Capital have discussed and that Bill Gurley of Benchmark Capital have warned about. There is also the very real risk that these companies don’t live upto the private market hype as Gurley suggests when he says many of these unicorns are not ready to be public companies.

*Angel Investors were not included in this analysis