Research Brief
1767
With 16 companies already joining the not-so-exclusive unicorn club this year, 2015 could see the most billion-dollar club entrants ever.

The worries about a bubble haven’t hurt private companies in their pursuit of getting a billion dollar valuation. In fact, through April 13, 2015, 14 new private companies raised financing at a billion dollar or greater valuation. To give you a sense for how crazy things are, our data set was pulled yesterday.  Today, two more were added to the club.  So now, we’re at 16 unicorns (Docker and Zomato were added today).

By the time you finish reading this research brief, 2-3 more will likely be added to the club. Yes – things are just that nuts.

Of course, as our Q1 2015 venture capital report highlighted, it’s a lot easier to raise at a billion dollar valuation then exit at one. Private market frothiness has not carried over to the public markets.

Here’s the trend over time of new entrants being added to the unicorn club. 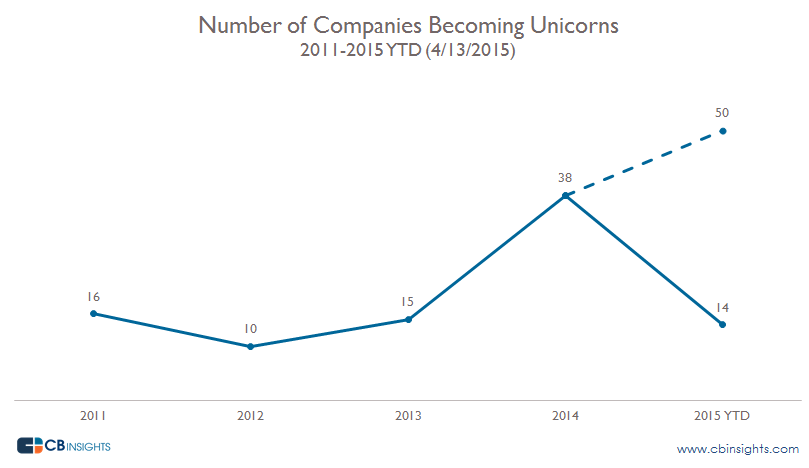 Last year was a record-breaking year, with 38 companies reaching billion dollar valuations (more than double the number of new entrants from a year previous). Through 4/13/2015, there have already been 14 companies that have become unicorns, putting it on pace to add a total of 50 unicorns to the club this year. In March alone 7 companies raised money at billion-dollar valuations, including Lyft, SimpliVity, and Nextdoor. 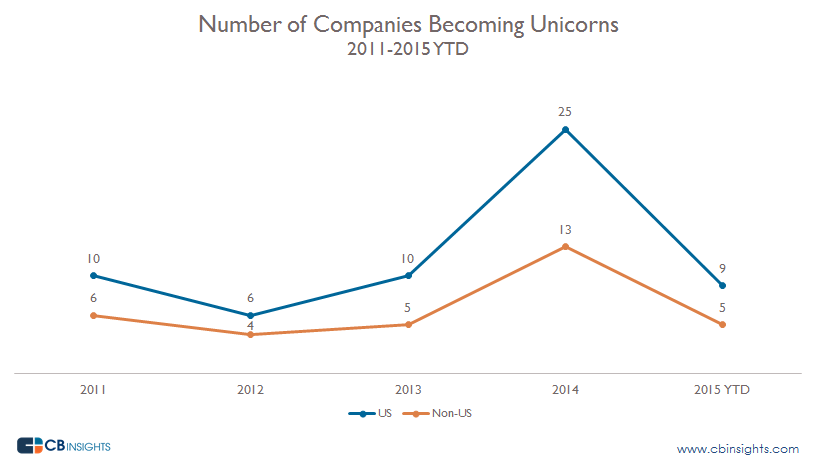 5 of the 14 new billion dollar companies have been international. While every US unicorn raised money in a late-stage financing round at their $1B+ valuation, 2 of the 5 international unicorns raised at a mid stage round.

Want more unicorn data? Sign up for our venture capital database below.