Startup investors should fight their natural instincts and be even more cautious when investing in a space that recently had a “high-flying” event.

The following is a guest post by Amit Karp (@amitkarp), VP at Bessemer Venture Partners

Investing in startups is not an easy job. As an investor, you are not only betting on a specific startup and team, but often on a market that doesn’t yet exist. Even the best team in the world is doomed to fail if it bets on the wrong market. The opposite is not always true.

One of the biggest mistakes venture capitalists make is overstating “false signals.” False signals can be a hyped event, such as a large acquisition (e.g., Facebook acquires WhatsApp for $22B) or a huge financing round tied to a skyrocketing valuation (e.g., Uber raises at $50B valuation). These kinds of events get lots of press coverage and become the main conversation topic among the tech community. What follows is that investors often assume this indicates a new market trend and start to pour money into these markets without thinking too much, as they try to find the next Uber or WhatsApp.

The trouble is that often these “high-flying” events are simply unique strategic moves by an acquirer, and don’t really signify a new market opportunity that will benefit many other startups. Moreover, even when it does indicate a new, large trend, it is often too late for new startups to enter the space. So new clones and copycats are destined to fail. This gets even worse as these hyped markets start to command high valuations as the classic anchoring effect takes place. It’s easy to think, “If Facebook acquired WhatsApp for $22B, then this new messaging app is worth at least $100M,” particularly when there are not a lot of other public reference points.

Here are a few recent examples that have or will cost investors a lot of money:

Mobile messaging apps were among the biggest successes of the past decade. There is no doubt that mobile messaging was a huge trend, as more than a billion people worldwide adopted it as a primary means of communication. Companies like Kakao, Line, Viber, Snapchat, and WhatsApp quickly became insanely valuable as they took over different geographies. Then, in February 2014, the tech world went nuts when Facebook announced it was acquiring WhatsApp for $22B — the largest VC-backed M&A exit of all time. Money began pouring into the mobile messaging space as investors attempted to find the next WhatsApp. This even included a $1.5M investment in an app that just says, “Yo.” Mobile messaging investments grew 4x(!) over the previous year, according to CB Insights data:

While mobile messaging is indeed a real trend, the timing was too late. By the time WhatsApp got acquired, the winners were already identified, and competing over new mobile messaging apps (or new mobile apps in general) became very difficult. As Fred Wilson wrote in a recent blog post:

Doing anything in the consumer mobile space these days is super hard. I can’t think of many consumer facing mobile apps that have gained massive traction and sustained it in the past three years. Can you?

The connected or “smart” home has become a favorite market for investors in the past few years as the prices of building hardware plummeted and new crowdfunding platforms like Kickstarter created the ability to rapidly assess market need. Then, in January 2014, Google announced it was acquiring smart thermostat startup Nest for $3.2B, and the smart home market went crazy. Many new startups suddenly raised a lot of capital trying to be the next Nest (the infographic and chart below are from CB Insights): 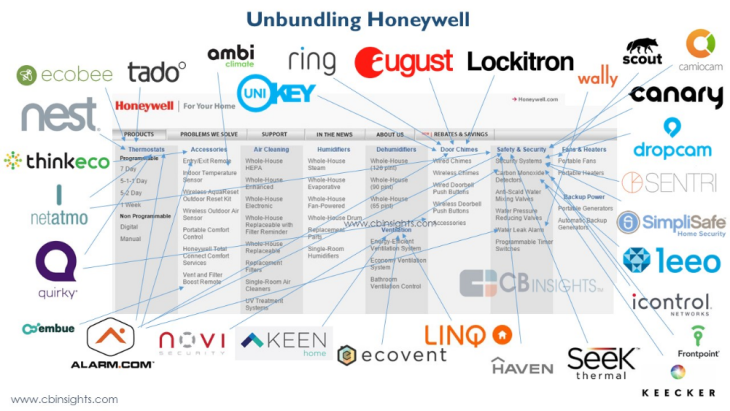 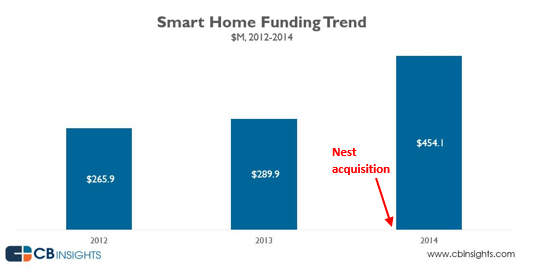 I believe the issue with this market was that many investors never stopped to think about whether there are good use cases for some of these new smart home devices (except for the usual example of the light turning on automatically when you enter the house) and whether they are ready for mainstream adoption (the answer seems to be not yet). In addition, the $3.2B Nest acquisition was often used by startups to justify high valuations.

The truth is that Google had many strategic reasons to acquire Nest and therefore agreed to pay 10x revenue (or even more). In “real life,” public hardware companies trade at 1x to 2x revenue. Even high-margin, fast-growing, hardware companies such as GoPro (0.9x revenue) and Fitbit (2.4x revenue) trade around this multiple. So if a startup wants to get a Nest-like $3.2B valuation without relying on the whims of Google, it needs to get to around $1B-$2B of revenue. This is not an easy task.

Uber, the $51B king of the unicorns, is among the most celebrated and imitated startups. The company set a record recently, surpassing the highest valuation ever reached as a private company. As soon as the tech community saw Uber’s skyrocketing valuation, many new “Uber for X” companies emerged. There’s an Uber for everything: Uber for groceries, Uber for house cleaning, Uber for moving, and Uber for lawn mowing. There’s an Uber for doctors, massages, haircuts, flowers, reservations, booze, marijuana, dog walking, cat sitting, and pizza. Here is what that looks like in the data (again, according to CB Insights): 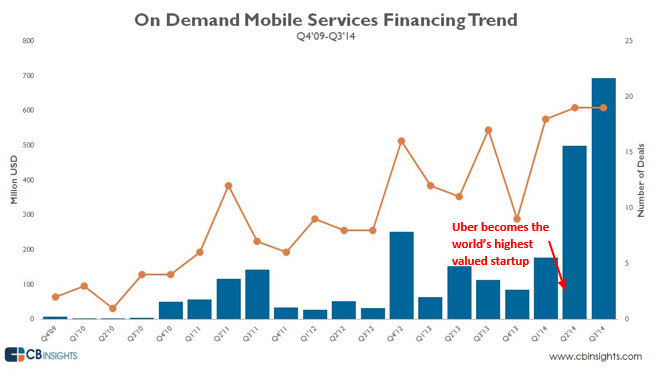 It turns out that, out of all “Uber for X” models, “Uber for taxis” is probably the best one. In addition, many investors never stopped to think, “If Uber has to burn tens of millions per quarter to grow its business, what does that mean for the countless ‘Uber for X’ startups that followed Uber’s model?” And today we are already starting to see the cracks. Homejoy, an “Uber for maids” company that raised $39.7M in funding, shut down in July 2015. Good Eggs (an on-demand grocery delivery service) laid off 140 employees. Zirtual (personal assistant) paused operations. Suddenly, investors’ appetite for money-losing “Uber for X” deals disappeared.

This doesn’t mean every large acquisition is a “false signal.” When Rupert Murdoch’s News Corporation bought Myspace in 2005 for $580M, the company had only 27M users and the social networks’ war was far from over. Accel realized that and led Facebook’s Series A at around that time, which was among the best VC investments of all time. Also, when Facebook acquired Instagram for $1B, there was still plenty of room for Snapchat to grow, as the company hadn’t even raised its Series A yet.

Quite often, large acquisitions or financing rounds do indicate that there are additional opportunities for new startups to grow in the space. But startup investors should fight their natural instincts and be even more cautious when investing in a space that recently had one of these “high-flying” events.
______________

This post originally appeared here. Amit Karp is a vice president in BVP Israel’s office. In 2012, Amit joined BVP’s New York office, where he was closely involved in Bessemer’s investments in Thinking Phone Networks, Blue Apron, Qwilt, and Cloudlock, among others. Amit serves as a board director for ScyllaDB and is a board observer for Fiverr, Dynamic Yield, CTERA Networks, and MyHeritage. Previously, Amit was a senior associate at McKinsey and a product leader at e-commerce search and merchandising solutions startup Mercado, now part of Adobe Software. Amit holds an MBA from MIT’s Sloan School of Management and a Bachelor of Science in Computer Science from Technion, the Israel Institute of Technology.

Sign up for our venture capital database below for more information on tech startups.