The outlier, of course, is Walmart’s recent $3B acquisition of Jet.com, which was one of the largest e-commerce acquisitions in history. The exception proves the rule, though.

It’s no secret that brick-and-mortar retail is in soul-searching mode. Macy’s, JCPenney, Office Depot, Sears, American Eagle, Abercrombie & Fitch, and more are closing dozens of stores this year. Sports Authority, Aeropostale, and American Apparel filed for bankruptcy over the past 12 months, and the proportion of “unhealthy” and “troubled” malls with 10% or higher vacancy rates is approaching one-fifth in the US. according to the CoStar Group.

To weather these challenges, most US retailers are investing heavily in merging their online and offline supply chains, expanding e-commerce, and adding features to attract fickle millennial shoppers into physical stores – Urban Outfitters, for example, even spent $20M in 2015 to acquire a pizza chain in an effort to lure foot traffic to stores and diversify its business.

Given the challenges these companies face, we used the CB Insights platform to gauge the extent to which big retail is looking at startups as investment and acquisition targets.

The data shows retailers have yet to seriously leverage startups as “outsourced R&D.” In fact, retail corporates’ investment and M&A activity is so low that even in sectors directly related to retail, technology companies still outplay them.

For our analysis, we looked at the National Retail Federation’s 2016 Top 100 list and specifically analyzed major brick-and-mortar companies, excluding food and and internet businesses from our analysis. Among the remaining 57 remaining companies from the top 100, we found that while their investments in private companies have increased, deal activity remains low, especially when compared to top US technology companies.

We compared the retailers’ activity against the investment and M&A activity of the top 57 publicly-traded US technology companies by market cap. 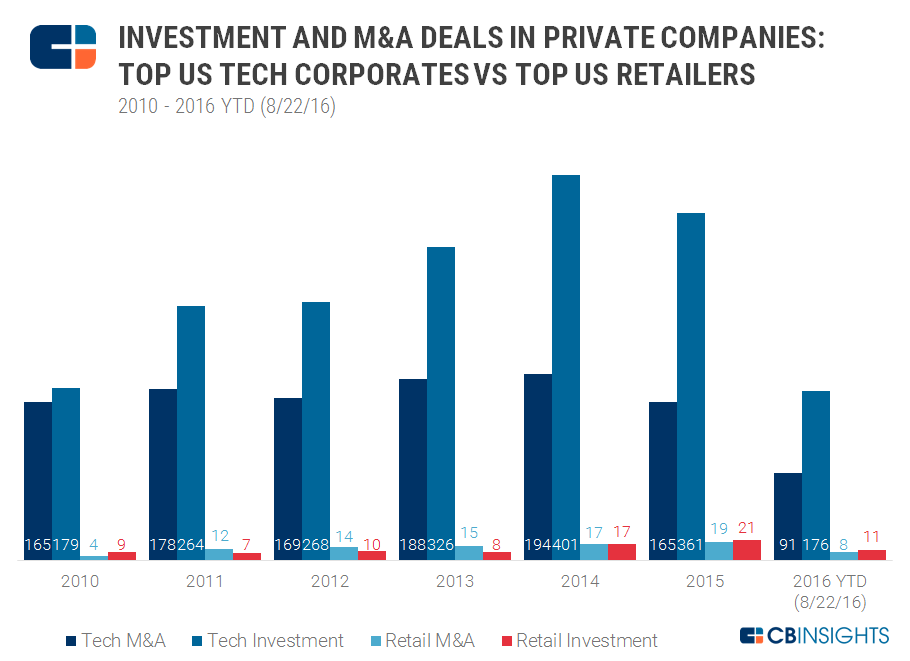 Looking specifically at e-commerce, an area where brick-and-mortar retailers would have an obvious strategic interest, our data shows that tech corporates (including e-commerce giants like Alibaba and eBay) are more active than traditional retailers. Since 2010, the top corporate investors in e-commerce startups have been Intel Capital, Google Ventures, Tencent, CyberAgent Ventures, and Comcast Ventures.

The most active brick-and-mortar retailer — Nordstrom — ranks 25th in terms of investment activity. The next most active traditional retailer — Walmart — ranks 46th.

Brick-and-mortar retailers have also been slow to acquire e-commerce companies. The outlier, of course, is Walmart’s recent $3B acquisition of Jet.com, which was one of the largest e-commerce acquisitions in history. The exception proves the rule, though, highlighting other retailers’ neglect of e-commerce startups.

The top e-commerce acquirers since 2010 have also been tech/internet companies, including pure-play e-commerce companies: Groupon, eBay, Naspers, CrowdSavings, LivingSocial, Snapdeal, and Rakuten. Walmart is the highest-ranked acquirer among brick-and mortars at #12, with just four e-commerce acquisitions since 2010 – Jet.com in 2016, Yihaodian in 2015, Luvocracy in 2014, and Reclip.it in 2013.

Some retailers that have made ambitious bets on e-commerce startups have indeed found innovative ways to leverage these companies. Nordstrom, for example, focused on integrating supply chains by allowing customers to return online purchases from Hautelook.com to Nordstrom Rack stores. The company said this move drove nearly one million incremental store visits. Since Nordstrom acquired Hautelook in 2011, it’s become a significant driver for overall company revenue.

One area where we would almost surely expect brick-and-mortars to be out front is in-store technology, which has seen explosive funding growth lately, even as e-commerce investment declines overall. In-store tech, which we define as hardware and software startups offering digital capabilities inside brick-and-mortar stores, can help stores better engage visitors, collect extensive behavioral data on customers, and integrate brick-and-mortar with e-commerce sales channels.

Deals to in-store tech startups are on track to grow over 55% in 2016, with many bets by smart money VCs including NEA and Andreessen Horowitz. Our Trends tool shows discussion around one of the most prominent in-store tech products – beacons – growing over the past few years and jumping during the 2016 Mobile World Congress, while interest in augmented reality for retailers got a boost from Pokemon Go.

But despite many retailers becoming clients of these startups, technology companies, again, are dramatically outpacing them in equity investments. The top corporate investors into in-store tech startups are Motorola, Google Ventures, Intel Capital, PayPal, Qualcomm, Cox Enterprises (a communications conglomerate), and eBay. Of course, it makes sense for technology leaders to invest in in-store tech, but traditional retailers should be wary when tech companies are out-investing them as leading investors in both online and in-store shopping.

Note: The in-store tech startup list is relatively small and early-stage, and we haven’t observed much M&A activity yet, so we omit the top acquirers analysis and limit our top investors chart to the top five.

As we saw above, America’s top retailers are indeed making some startup investments, and acquiring at least a few private companies per year. But based on our analysis of this cohort’s activity, we found retailers’ dollars have largely flowed toward product plays (new brands or lines of merchandise), not process plays. In other words, they’ve largely focused on acquisitions and investments that expand their existing product offerings, rather than ones that could help them streamline commercial processes and more deeply engage shoppers. 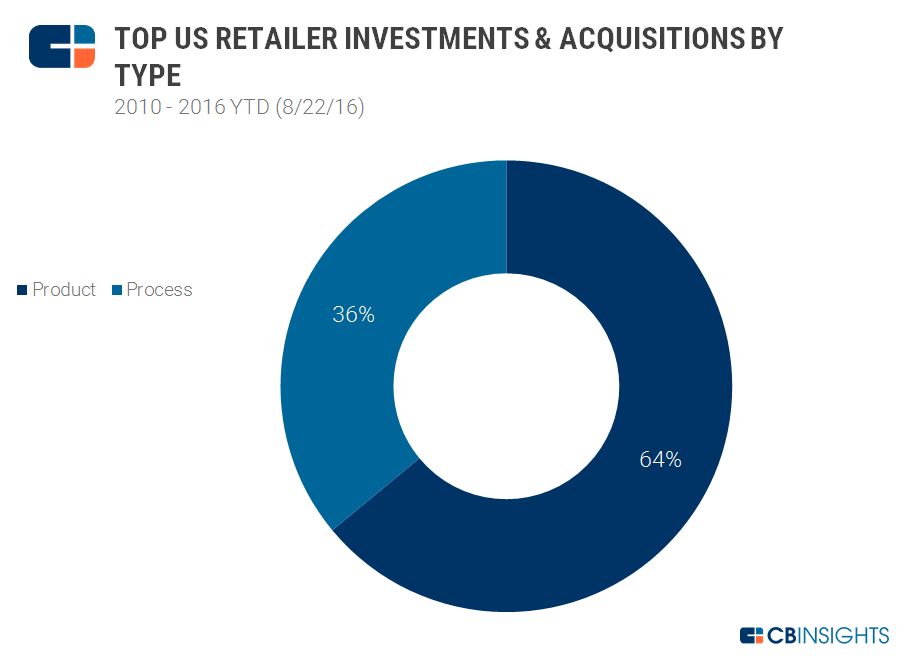 Expanding horizontally into new, related industries – or even extending existing product lines – can be hugely beneficial, of course. For example, Macy’s 2015 acquisition of cosmetics chain Bluemercury helped round out the department store’s luxury makeup selection. However, at the end of the day, it’s still just more inventory. The retail industry is transforming by the day – through next-gen commerce, fast-fashion supply chains, digital marketing, and cutting-edge tech like augmented reality displays – and relying on new, physical goods to keep drawing in customers may be unsustainable.

Certain retailers and brands have experimented with process investments. Nike, for example, recently acquired Virgin Mega, a mobile app that lets fans wait in “digital lines” for new product releases and improve their position by chatting with other fans and engaging in brand activities. Nike’s fans already wait days for new sneakers. Virgin Mega could give Nike a useful platform to harness fan excitement while maintaining products’ air of exclusivity.

To be sure, several retailers also support incubator/accelerator programs, such as Target, which launched a largely process-oriented accelerator/incubator program based in India in 2014. Recent graduates include Uncanny Vision, which develops machine vision software oriented toward security, and Unbxd, which powers product recommendation features on e-commerce sites. This year, Target also led a US retail accelerator program in conjunction with Techstars, a well-known accelerator. Others have developed internal innovation labs, such as Walmart’s @WalmartLabs in San Francisco. (See our list of more here.)

Many companies in our cohort have also cultivated startup partnerships, with varying levels of success. Some have garnered positive publicity, such as Ralph Lauren’s work with wearable tech startup OMsignal to create a fitness-tracking polo shirt. See the below chart for more examples.

Partnerships and innovation labs can move the needle, but they come with their own and pitfalls. (See our post on corporate innovation theater.) Partnerships can end, vendors can align (or be acquired) by competitors, and external startups can pivot or fail. Partnering with startups won’t necessarily give retailers a long-term edge over competitors. Emphasizing the point, the partnership we see retailers most commonly pursuing — leveraging on-demand delivery services to offer same-day delivery — is not usually a transformative innovation for the core retail business itself.

Investing in or acquiring e-commerce or in-store tech startups is one way to harness innovation from startups fashioning the future of commerce and a way for retailers to integrate already proven models of tech-enhanced commerce.

But as retailers dally, tech is beating retail in the private markets.

Where did we get this data? Login to CB Insights or sign up for free below.